The Blockchain Revolution For Loyalty Programs

Our Expertise Insights Velocity 2017 The Blockchain Revolution For Loyalty Programs
Loyalty programs have proliferated across travel, retail, financial services, and other economic sectors. The average US household, for example, participates in some 29 different loyalty programs, according to the biennial 2015 Colloquy Loyalty Census. The result is a maze of point systems and redemption options, together with cumbersome processes for exchanging points among program partners. Loyalty programs are ripe for innovation that would make them easier to use.

Blockchain may be the answer. Best known as the technology behind Bitcoin, blockchain enables a ledger of transactions to be shared across a network of participants. When a new transaction occurs (for example, a loyalty point is issued, redeemed, or exchanged), a unique token is created and assigned to that transaction. Tokens are grouped into blocks (for example, every ten minutes) and distributed across the network, updating every ledger at once. New transaction blocks are validated and linked to older blocks, creating a strong, secure, and verifiable record of all transactions, without the need for intermediaries or centralized databases.

For consumers juggling an array of loyalty programs, blockchain could provide instant redemption and exchange for multiple loyalty point currencies on a single platform. With only one “wallet” for points, consumers would not have to hunt up each program’s options, limitations, and redemption rules.

All loyalty programs are vulnerable to a blockchain revolution, but the travel industry is perhaps the most at risk. Travel loyalty programs tend to be complex and multi-currency; program points can even differ by trip component (flight, car rental, hotel, dining), leading to fragmented point collections and some points never being redeemed. It can be difficult for the average person to even accumulate enough points to earn a meaningful reward.

THE CURRENT STATE OF THE LOYALTY INDUSTRY

THE BENEFITS OF DISRUPTION

Industry after industry is experiencing disruption from technologies that reduce inefficiencies and frictions – often disintermediating established players in the process. Large travel companies, such as airlines and hotel chains, know this from experience: They pay billions of dollars in commissions each year to Priceline, Expedia, and other online travel agencies (OTAs) that have transformed how consumers book flights, hotels, and rental cars.

Now, both small startups and large-scale technology companies are looking to innovate around blockchain-based loyalty platforms. Travel companies with loyalty programs, whether standalone or part of a larger alliance, will need to consider when, not if, to adopt blockchain.

Early adopters could benefit considerably. For example, a growing volume of unredeemed points has created a large balance-sheet liability for many industry players. (New accounting standards require that revenue attributable to the value of loyalty points must be deferred until the points are redeemed.) Adopting blockchain would enable companies to rapidly add and maintain loyalty partnerships without adding complexity to their programs. By providing more redemption options, this robust, frictionless partner network would act as a much-needed release valve for these balance-sheet pressures.

Blockchain also would enable businesses to break out of the mold of narrowly defined, one-size-fits-all programs and redemption processes filled with customer hassles. Consumers increasingly expect personalized (not merely segmented) travel offerings and digitally enabled one-stop services – the growth of OTAs is a testament to that. Blockchain would allow both large and local partners to be added seamlessly, making the crafting of on-trend offers much easier, while virtually eliminating the back-end irritations of point redemption.

What shape are blockchain-based loyalty networks likely to take? Initially, each loyalty program might look to develop its own solution, but over time smaller loyalty programs likely would band together to compete more effectively with larger ones. Ultimately, we anticipate the development of four to six blockchain-based loyalty networks, each anchored by a major airline, a major hotel chain, or a group of smaller travel companies. Options for building and maintaining the blockchain platform could include a joint venture with technology partners or with network providers such as banks or payment card processors.

Of course, blockchain platforms that unify multiple loyalty programs could pose some risks. These platforms would add a transaction layer between consumers and program operators and merchants, likely generating a small per-transaction cost – which could grow over time, much like OTA fees. Customer data – a loyalty program’s most valuable asset – could become available to other network participants, even competitors. Currency devaluation is another risk in what is essentially an open marketplace for points trading.

Getting in on the ground floor of blockchain platform development would help travel companies reduce these risks. Participating in the initial structuring of commercial agreements and partnerships will be essential to protecting critical loyalty program components, i.e., currency value, customer data and relationships, and transaction costs.

For any travel company considering an investment in blockchain, a few rules will be crucial: First, they will want to participate in defining how currency is exchanged between programs (exchange rates, transferability rules). 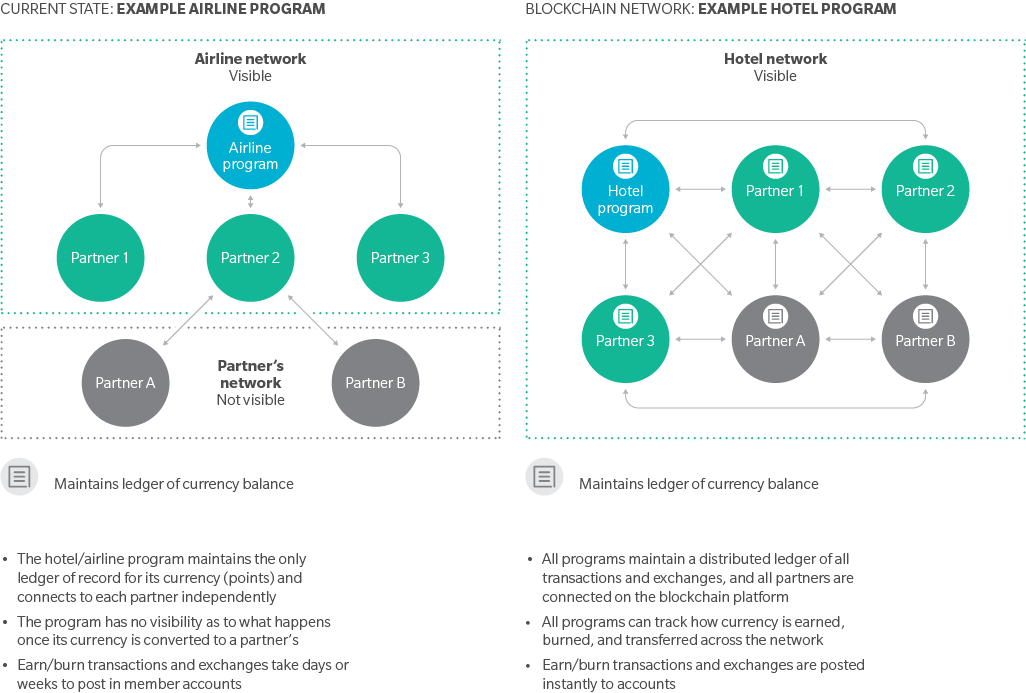 Second, they should seek to maintain exclusive control over their data, ensuring that only loyalty points enter the transaction stream. And third, they should require guarantees that the platform is and will remain unbiased. Otherwise, traditional travel intermediary tools, such as paid search placements and exclusive promotions, could force companies into pay-to-play arrangements to ensure competitors don’t gain an advantage.

In conclusion, travel companies such as airlines and hotel chains recognized too late the power of OTAs to disrupt the industry and have been paying for that misstep ever since. The nascent state of blockchain for loyalty programs, however, offers an opportunity to realize the value of disruption and shape its future impacts – if travel companies don’t wait too long.

The Blockchain Revolution For Loyalty Programs