Our Expertise Insights Velocity 2017 Aviation Growth Is Outpacing Labor Capacity
A shortage of aviation mechanics within the next decade threatens the projected expansion and modernization of the global airline fleet. We project that the gap between the supply of mechanics and demand for them will develop in the United States by 2022 and reach a peak of 9 percent by 2027.

Brian Prentice and Derek Costanza discuss the magnitude of the pending global talent shortage for mechanics, what this means for the regions of North America, Europe and Asia, plus how airlines and MRO providers can better prepare.

The problem may emerge sooner in Asia, where the bulk of growth in the aircraft fleet is slated to occur. Ultimately, the shortfall may raise the cost of maintenance for airlines and increase turnaround times for scheduled maintenance. This could potentially force the airlines to retain more spare planes to avoid cancellations and late departures resulting from maintenance delays.

The shortage is, in part, a consequence of an aging global population. Between now and 2027, a record number of maintenance technicians will be eligible to retire as more baby boomers reach their sixties. For example, in the US, the median age of aviation mechanics is 51 years old, 9 years older than the median age of the broader US workforce as calculated by the US Bureau of Labor Statistics.

And while there are plenty of people in the millennial generation who could step up and take the place of retiring workers, so far they show few signs of being willing to do so. Our projections show that the number of people leaving the maintenance technician workforce will outpace the number preparing to enter it for most of the next decade.

To some degree, the problem stems from aviation mechanics’ current wages, benefits, and perks. In an Oliver Wyman survey of executives of airlines and in the maintenance, repair, and overhaul (MRO) industry, 51 percent of respondents identified wages and benefits as an obstacle. The Aviation Technician Education Council (ATEC) estimates that 30 percent of those who finish an aviation maintenance training course end up accepting employment in another industry.

The aging of the mechanic workforce and a surge in anticipated retirements could not come at a worse time for the industry, as it gears up to accommodate a larger, newer, and more technologically advanced fleet. The Oliver Wyman Fleet Forecast shows global airlines adding 10,133 planes by 2027, growing the fleet by 40 percent. This reflects purchases of 20,444 next-generation aircraft in the next 10 years and the retirement of 10,311 planes. The Asian fleet will double in size and, beginning next year, will become the largest regional fleet.

Within 10 years, 58 percent of the fleet will comprise fuel-efficient planes designed and built after 2000. Moving forward, mechanics will need a wider range of skills than ever – able to work both on the newest planes and those that have been flying for 20 years – and these are not necessarily the same types of planes. This requirement further complicates the looming worker shortage.

Within 10 years, 58 percent of the fleet will comprise fuel-efficient planes designed and built after 2000. Moving forward, mechanics will need a wider range of skills than ever – able to work both on the newest planes and those that have been flying for 20 years – and these are not necessarily the same types of planes. This requirement further complicates the looming worker shortage.

Tomorrow’s maintenance technicians will need to be tech-savvy diagnosticians – something that was not imaginable a few decades ago. Our survey of executives identified Copyright © 2017 Oliver Wyman 2 VELOCITY 2017 three emerging technologies that will be vital for the next generation of mechanics to know: composite material repair and manufacture; collection and reporting of data for advanced analytics, big data, and predictive maintenance; and the newest avionics and electrical systems.

Sixty-four percent of the surveyed executives expect their companies to hire mechanics over the next 3 years to expand the workforce; another 23 percent say they will hire simply to maintain their numbers. And 72 percent of those surveyed expect the search for qualified candidates to get much harder. To help mechanics develop necessary skills, 84 percent of survey respondents said their companies were offering classes and workshops, while 61 percent said they had established partnerships with technical schools or colleges. But, since aviation competes with other industries to attract the sheer quantity of interested new hires it now needs, companies will have to look well beyond the usual tactics of opening up additional training programs. 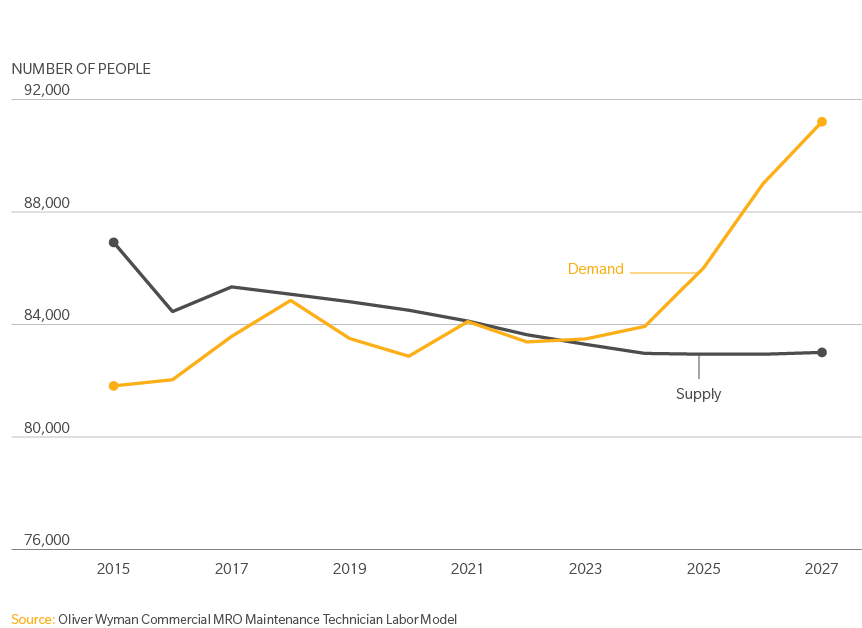 Just as airlines and manufacturers are doing for other highly skilled positions, such as engineers and pilots, the MRO industry will have to tailor new incentives to expand and protect the technician pipeline, raise the desirability of working in aviation maintenance, and recruit across a broader demographic, especially given competition for workers with other technologically intensive industries.

We anticipate updating IT will become an increasingly important strategy to combat the impending talent shortage and help optimize operations and workforce productivity. Survey data shows that many companies are planning upgrades or migrations.

In addition, higher maintenance costs may prompt airlines to seek out more efficient MRO markets in different geographies or pursue joint ventures to lower the price tag. On the flip side, MROs, OEMs, and airlines prepared to meet this shortage challenge will be poised to win incremental business and grow over the next decade.

We believe that the current imbalance in labor supply and demand in the MRO industry eventually will be remedied by a combination of improved efficiencies, driven by new technology solutions and increased wages that will attract new technicians into the workforce. This might take a decade to achieve however, and in the meantime, both the airlines and the MRO industry will need to find new ways to cope with this challenge.