Automation And The Challenge Of Aviation Crew Fatigue

Our Expertise Insights Velocity 2017 Automation And The Challenge Of Aviation Crew Fatigue
The US federal aviation administration introduced new regulations for aviation crew flight time and duty time in 2013, known as FAR 117. Those changes incorporated the latest in fatigue science, but similar rules have not been adopted worldwide and the science continues to advance, keeping crew fatigue a priority for airlines.

Fatigue is not just about being tired. Tiredness can be remedied by sleep. Fatigue is cumulative, the product of an incomplete recovery from days of insufficient sleep. It affects people who consistently work long hours under stressful conditions. In aviation, its consequences include declining health and productivity of flight crews, rising attrition, and safety concerns.

While regulations need to better reflect the diverse factors that affect fatigue, automation also may hold part of the answer. As aircraft design and flight deck capabilities evolve through technologies such as machine learning, more opportunities are emerging for task automation that could impact crew fatigue – as is happening in other industries with routine or repetitive operations, such as trucking and heavy machinery operation.

INNOVATIONS ON THE HORIZON

For airline pilots, automation could reduce the pressure to manage and monitor parallel and routine tasks in the cockpit, freeing up their mental capacity for more complex computations and judgments. For example, researchers are currently testing resilient machine learning-based autopilot systems that can adapt to changing conditions. These systems “learn” from experienced pilots how to react to situations, rather than having to be explicitly programmed with instructions for every conceivable circumstance.

Ultimately, technology is likely to evolve over time to the point where one crew member is able to handle a sizable chunk of a flight, with automation as the co-pilot – a potential boon given an anticipated pilot shortage in the future. Eventually, a remote pilot on the ground could take the second seat on some flights or flight segments.

Technology is even tackling the fatigue question through the development of devices that can monitor fatigue and adjust the level of automation to ensure sufficient crew engagement. For instance, the trucking industry already uses a system to monitor eye and eyelid movements of drivers to make sure they are alert.

THE RISKS AND REWARDS OF AUTOMATION

While automation could relieve a crew from having to attend to certain routine tasks, it is not a panacea. When it comes to fatigue, automation may also introduce unexpected risks.

Research suggests that reducing or eliminating the stimulation of manual tasks may slow reaction times and bring other fatigue symptoms to the fore. One danger is the phenomenon of microsleeping – moments when part of the brain goes offline, so to speak, while other parts remain wakeful. The phenomenon has been identified as a frequent cause of automobile accidents.

POSSIBLE FUTURE AUTOMATION IN THE COCKPIT 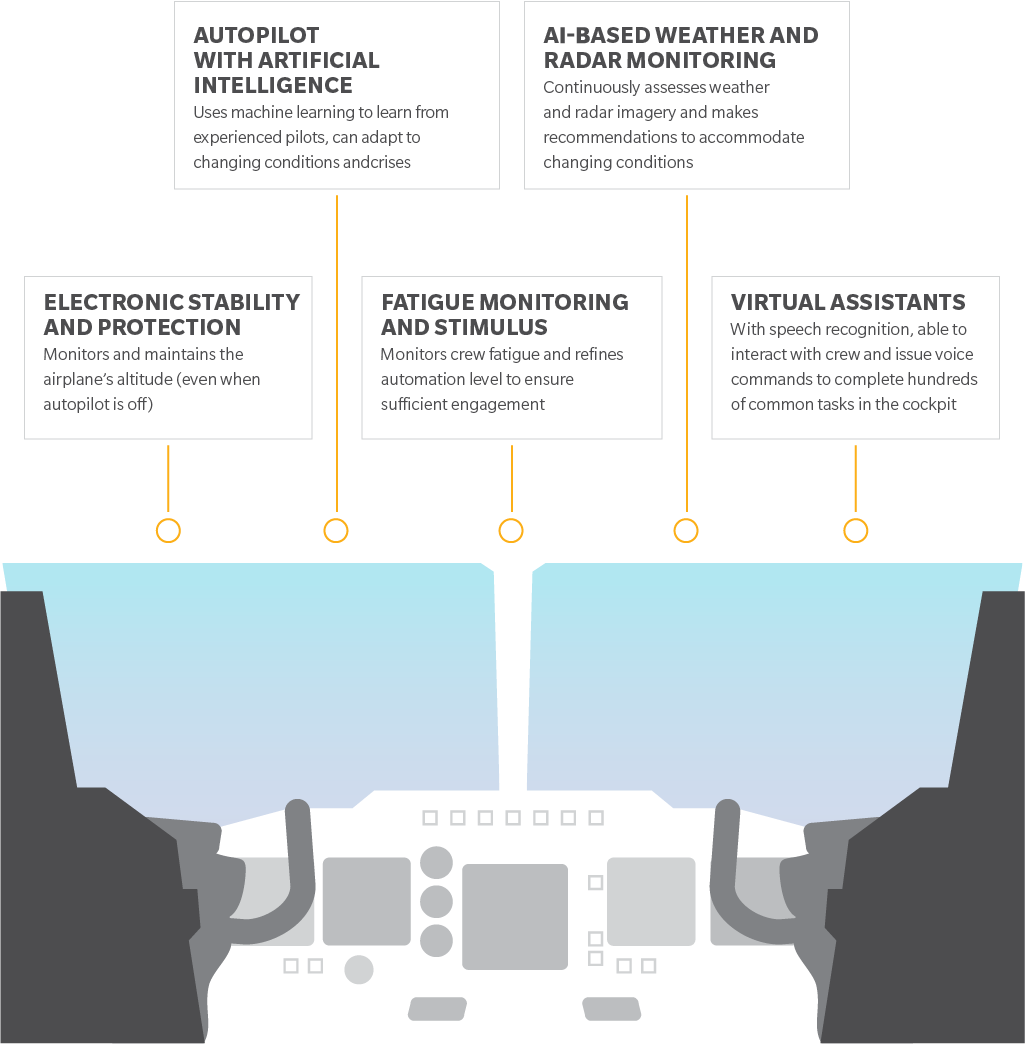 A big part of fatigue prevention is developing realistic and resilient crew schedules that incorporate the latest in fatigue science and accurately reflect a challenging operational environment. In the US, FAR 117 has helped launch that process, but in other cases, regulations have fallen short on addressing the full spectrum of issues that lead to fatigue. While rules exist that govern how many hours crews can work (and how often they can work overtime), regulations vary by geographic market, and limits on flight duty periods do not always take into account more qualitative factors, such as tough routes, cumulative schedule intensity during busy travel seasons like summer, and the impact of standby duty.

Before making decisions on task automation, airlines will need to be able to determine which phases of flight present higher risks for fatigue. And, for days when things don’t go as planned, standard protocols need to include sufficient emphasis on crew fatigue and the impact of disruption on crews. As airlines adopt new technology to collect and analyze the reams of technical flight and equipment data now being generated, they have an opportunity to incorporate capabilities into these systems that can gather more information on human factors as well, providing greater insights into fatigue.

No doubt, this is a tricky balancing act for both airlines and regulators. Still, the payoff for good fatigue management coupled with cautious adoption of automation can be substantial: excellent safety records, higher crew productivity, and happier customers.

Automation And The Challenge Of Aviation Crew Fatigue