Our Expertise Insights Velocity 2017 The Rocky Road For Autonomous Vehicle Insurance
While fully driverless cars and trucks as a regular feature on the roads may still be some years away, vehicles with some level of autonomous capabilities or artificial intelligence – what are known as advanced driver assistance systems – could jump from a little more than 10 percent in 2015 to close to 40 percent of all vehicles by 2025.

One of the more critical issues to be resolved is how insurance will change as vehicles get smarter. Advanced driver assistance systems will upend accidents and claims experience. Without historical data to go on, insurers will need to develop more flexible processes and analytical capabilities to accommodate rapid technology evolution.

As part of this process, it will be important for transport fleet operators and vehicle manufacturers to work with insurers to provide a steady stream of data as a basis for new pricing and underwriting models.

THE OUTLOOK FOR ACCIDENTS AND PREMIUMS

Autonomous vehicles offer the prospect of eventually eliminating most traffic accidents caused by human error: insurance giant Swiss Re projects that advanced driver assistance could cut up to 45 percent of accidents by 2020.

That improvement won’t happen overnight, though, and autonomous capabilities might even contribute to some accidents near term, as the bugs are worked out of these systems. Nearly all driverless test cars in operation today have been involved in crashes, mainly because they didn’t anticipate that humans don’t always respond logically when driving or follow the rules of the road. Human drivers, on the other hand, don’t always accurately gauge what to expect from autonomous vehicles. Most likely, accident rates will decline gradually over time, as machine learning makes for smarter vehicles and human drivers get used to how autonomous vehicles interact.

There are predictions that premiums could decline by as much as 60 percent once self-driving vehicles become plentiful and vehicle losses and damage begin to fall. Before that point, however, there is potential for significant volatility. The insurance industry has been built on being able to look backwards to assess risk, but now will have to get used to more agile and experimental processes, making pricing more of a moving target.

THE NEED FOR NEW DATA AND ANALYTICS

A pivotal necessity for insurers will be developing the ability to analyze and act on real-time data. Insurers will have to become vacuum cleaners for relevant statistics and develop rapid-fire analytics to decipher them. For example, what will it mean from an insurance pricing perspective when half of the cars and trucks on the road have lane departure warning systems and another third have automatic braking? This is further complicated by the fact that systems are being produced by different manufacturers, with some more effective than others.

Data is a higher priority for the industry than ever. Since the 1990s, vehicle insurers have been seeking more granularity in their risk assessments and market segmentation, increasingly asking more questions of potential policyholders. In Germany, for instance, insurers had five risk criteria in the mid-1990s, but now have as many as 50. Because each insurer has its own criteria and algorithms, many pricing models are now black-box calculations and not easy to back-calculate from the outside.

To collect more detailed data, major insurance carriers – for example Geico and Progressive in the US – are offering some customers an option that lets them pay as they drive, monitoring either how well they drive or how much via a telematics device. Telematics may be a way forward for insurers to tackle one of the biggest obstacles they confront – developing the IT capability, either internally or through outside service providers, to cope with frequent, real-time, and unstructured data.

The same is true for car and truck makers, when it comes to both data collection and IT upgrades. Like insurers, they will need to constantly refine their products based on feedback from the road. Manufacturers such as Tesla already swear by data collection, which in Tesla’s case goes far beyond the typical telematics system. The electric car maker literally upgrades its models through software downloads and considers itself as much a technology company as a car maker.

This new real-time data will be crucial in determining fault in an age of autonomous control. With the transition to self-driving vehicles, the insurance industry is already envisioning gradually moving from individual coverage to insuring vehicle and software manufacturer risk.

Even if some manufacturers of self-driving features accept responsibility at the front end for malfunctions of their systems, however, as Volvo in 2015 committed to doing, this does not necessarily eliminate the risk once plaintiff lawyers get involved. The newness of the situation is likely to lead to an increase in litigation, especially given the complication of assigning blame when technology is a factor.

In these early years of autonomous capability development, collaboration will be key for vehicle manufacturers, transport fleet operators, and insurers. Establishing ties early in the game will be useful for developing and sharing the data and analytics they will all need to understand how the technology will impact their respective industries and the relationships among them. These various industries also may find it useful to cooperate in terms of providing input to regulators, as governments begin to reshape the claims process and redefine the concept of fault to reflect the new landscape. And it will be in the best interests of operators, manufacturers, and insurers to make sure that insurance solutions continue to be cost effective and efficient as autonomous vehicle technology evolves. 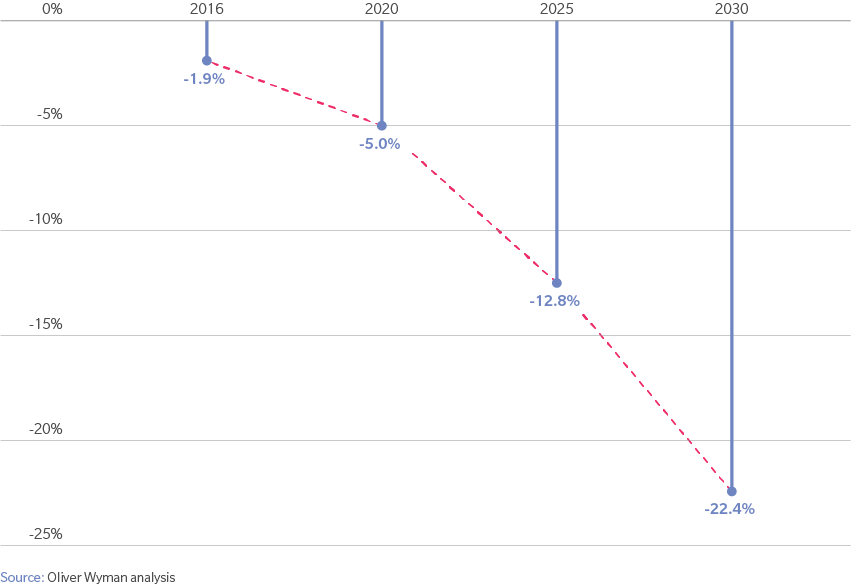