In November of 2017, United States’ crude oil production exceeded 10 million barrels per day for the first time since 1970, according to the US Energy Information Administration (EIA). Analysts have predicted that US could become the world’s largest oil producer in 2018, surpassing Saudi Arabia and Russia. How did we get here, and what does it mean for the industry?

US shale oil and gas producers have been ramping up production to take advantage of rising crude oil prices – prices that had been rising in the wake of a deal between the Organization of the Petroleum Exporting Countries (OPEC), Russia, and other non-OPEC producers to reduce oil output. That deal sent the price of Brent crude oil to above $70 a barrel in January of 2018, after the industry had suffered through $54 per barrel oil on average in 2017.

But with oil producers in North America expanding output, prices are likely to remain volatile. Unlike national oil companies and oil majors that typically take five to 10 years to develop conventional oil reserves, these independent and “unconventional” players have improved their drilling and fracturing technology to the point where they can respond within months to temporary spikes or dips in the market.

A NEW ERA OF UNCERTAINTY

The recent price swings highlight a new era of uncertainty gripping the world’s energy markets. As global oil producers work at cross-purposes, the industry’s traditional boom-bust cycle is being replaced by faster, shallower price rotations based on changes in production. (See Exhibit 1.) It makes price movements less extreme but also more difficult to predict. The constantly fluctuating number of barrels of crude available from nimble shale operations is a primary driver. But other factors are the long-term impact of increased fuel efficiency and the fits and starts of the global transition away from fossil fuels on world demand. The news is all good for customers, but it makes planning for industry players much more difficult.

Exhibit 1: THE NEW RULES FOR OIL 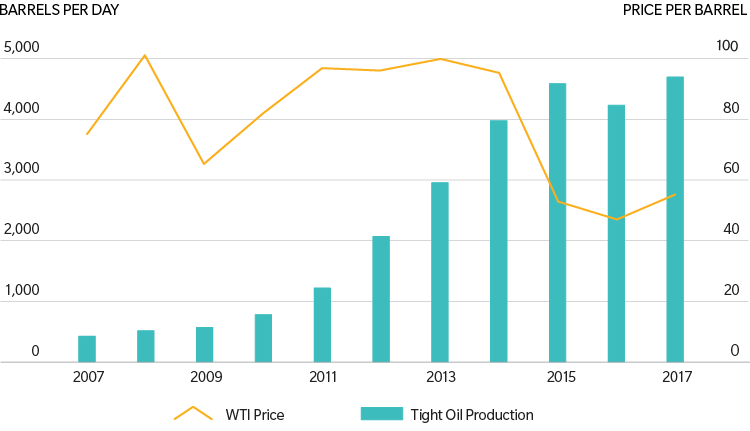 This unpredictability may only intensify as oil markets continue to adjust to shifting realities. Even more potentially destabilizing for major players, the expected surge in the US oil supply may be enough on its own to meet all of this year’s growth in global oil demand. After being one of the world’s largest net importers for decades, the US – while still a net importer of oil – is now selling millions of barrels of oil to China, Britain, Mexico, and India, a new reality made possible when restrictions on crude oil exports were lifted in 2015.

The soaring US output comes from fracking operations that have cut costs dramatically since slumping prices in 2014 forced dozens of companies into bankruptcy. These increasingly efficient survivors now represent half of U.S. oil production, up from a mere 10 percent just seven years ago in 2011. In fact, 2018 may mark the first year shale producers will be able to fund future expansions of drilling programs through their own cash flow.

While major oil companies plan to dramatically increase shale production in the Permian Basin in Texas and New Mexico, US shale production alone is unlikely to be enough to satisfy the world’s growing oil needs – especially when oil reserves in shale may only get us another 10 years of oil and not necessarily 50. Oil companies will need to develop both new conventional and unconventional crude oil resources to keep up with current demand for roughly one million more barrels of oil every year, in addition to replacing the approximately four million barrels lost annually as reservoirs are naturally depleted. In total, we estimate that the oil and gas industry will have to replace about 40 percent of today’s oil production over the next seven to nine years.

That means difficult decisions lie ahead for independent shale producers, national oil companies, and the major integrated companies. While they can start to tap into the global reserves of shale oil, which exist literally everywhere, developing the reserves in most places will require a significant investment to build the shale ecosystem and supply chains needed, in addition to the infrastructure to gather, treat, transport, and store the crude oil. (See Exhibit 2.) Or they can develop conventional reservoirs where it will require long-term investments in new technologies to bring the cycle times and costs more in line with those of nimble shale producers. Most major producers with large balance sheets will likely hedge their bets and attempt both.

Generally, cheaper oil is certain to have at least one short-term impact: It will compete with and potentially slow down the world’s expected transition to renewable, clean energy.

Transportation accounts for the majority of the world’s oil demand, and as long as oil prices stay way below their 2008 peak crude oil price of $145 per barrel, there’s less economic urgency to switch to electric vehicles and hybrids, even in China and Europe where there has been governmental support to move away from internal combustion cars. Electric vehicles will only account for 7 percent of the cars on the road over the next 12 years, Morgan Stanley estimated when oil prices were relatively low in May in a report titled, “One Billion BEVS by 2050.”

Exhibit 2: THE WORLD’S SHALE RESOURCES BY THE BARRELS

The United States is the world’s leading shale producer. But more than one trillion barrels of unconventional oil exists around the world. Here’s how much tight oil could be recovered in 39 countries

Long term, however, oil demand to operate cars is likely to decline as fuel efficiency for all manner of transportation increases, car ownership continues to fall, and electric and autonomous vehicles become more popular. By 2050, more than half of the world’s passenger cars are likely to be electric vehicles, according to the Morgan Stanley study. With the right combination of technological advances, cost reductions, and integration with renewable energy and storage, the tipping point for electric vehicle adoption could potentially be much earlier. These trends will require oil producers to shift their focus away from transportation and diversify towards innovative petrochemical products to capture market share in diverse end uses, such as clothing and construction materials.

To match the new environment of constant, low-grade volatility in both prices and supply, producers and consumers of oil may need to re-evaluate assumptions and continuously adjust their strategies. Here are several ways that some forward-looking producers and customers are already beginning to do this:

Diversifying oil suppliers and sources. Major oil and gas producers are preparing for greater uncertainty by shifting their reserve portfolios toward unconventional oil and gas in order to respond nimbly and competitively to market shifts. Companies such as Exxon, Chevron, and Shell have all said they expect to expand their production in shale assets in the US, Canada, and Argentina.

At the other end of the spectrum, refineries and other industrial customers are starting to broaden their sources of oil supply and seek more favorable terms. Last year, for example, India, which imports about 80 percent of its crude requirements, began importing oil from the US for the first time in its history. More recently, Poland signed its first ever contract for US crude oil to diversify its supplies from Russia. Some independent refineries in China, Japan, and Poland are trying to secure spot crude oil cargoes to supplement their supplies from traditional long-term supply contracts.

Developing new digital efficiencies. Major oil and gas producers are now trying to apply lessons from the shale revolution’s use of cutting-edge technologies to reduce development cycle times and costs for offshore conventional oil projects between 40 percent and 50 percent. Although the effort to digitize oil operations is still in its infancy, leading producers are working closely with oilfield services companies, engineering firms, and construction teams to incorporate artificial intelligence, robotics, and predictive maintenance into offshore operations. Drones are beginning to be used to check for pipeline leaks, self-driving trucks are moving tar sands, and Schlumberger is experimenting with a robotic drilling rig that will complete land wells in 30 percent less time than conventional rigs and require 30 percent fewer man-hours. All of this is with the aim of reducing the marginal cost of the barrel from the current $70 a barrel to around $40.

Major players are also optimizing their field development plans by tapping into new production data streams and developing three-dimensional digital models of their massive offshore platforms. By modularizing components, they hope that deepwater offshore developments can be prebuilt and assembled in three to four years instead of the current seven to nine years, at a fraction of the cost.

Investing in differentiating new services. At the same time, some national oil companies and oil majors are exploring new ways to differentiate themselves from shale producers by investing in refineries, pipelines, petrochemical production, and storage infrastructure close to their customers. Saudi Aramco, for example, is considering committing billions of dollars to expand its refining capacity in Malaysia and Indonesia, as well as a new refining and petrochemical plant in China in an effort to lock in customers.

Re-evaluating buffers to a more uncertain environment. As unpredictability becomes the industry’s new normal, some oil and gas producers have started to rely more on hedging as a way to protect themselves from volatile crude oil prices by buying futures contracts that either lock in future prices or put limits on them all the way from their oil wellheads to their refined products. By placing upper and lower bounds on price volatility, producers can count on a more certain cash flow.

Some countries in Asia and the Middle East may come under social pressure to reinstate subsidies to shield their citizens from more frequent price swings at the fuel pump. Indonesia, the United Arab Emirates, and several others accelerated a process of retracting gasoline and diesel fuel subsidies and linking them to market price a few years ago to take advantage of the dramatic fall in oil prices while assuming that they would remain “lower for longer.”

The first months of 2018 have shown that the oil industry has entered an era in which change will be the only constant for the foreseeable future. While oil prices will not spike to the peaks that they hit when OPEC and geopolitical events ruled the oil market, the oil markets will likely be unstable as the ranks of maverick shale producers swell, oil majors and national oil companies try out new digital techniques on their conventional fields, and new trade patterns emerge. As we have seen in other industries, to make the most of the new opportunities that lie ahead, oil companies will increasingly need to morph into agile organizations that can pivot to offset and even capitalize on disruptive new shifts. No one will be able to afford to stand still.

This article is posted with permission of Harvard Business Publishing. Any further copying, distribution, or use is prohibited without written consent from HBP – permissions@harvardbusiness.org. 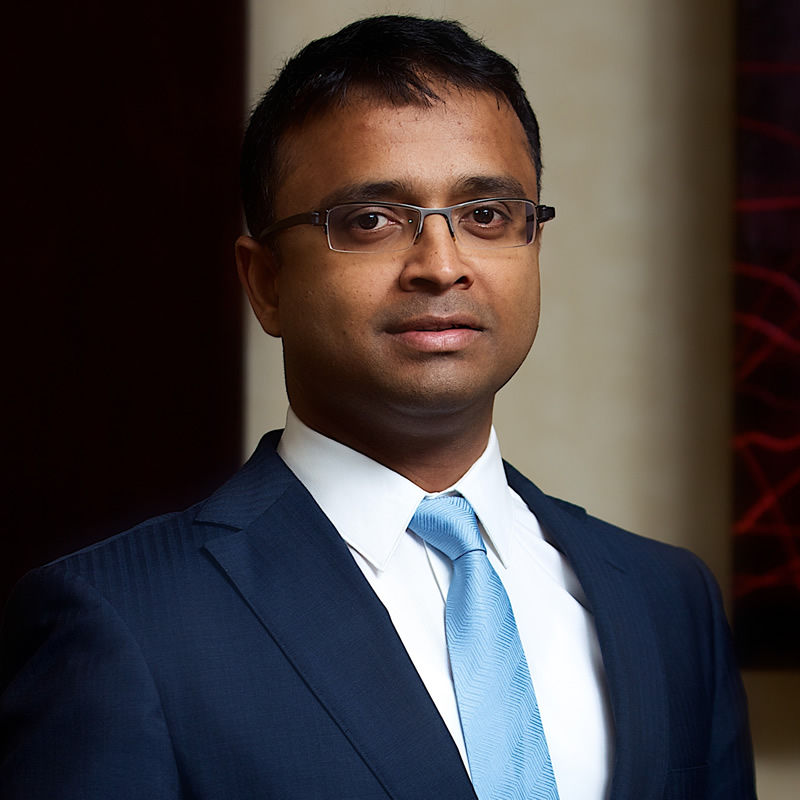 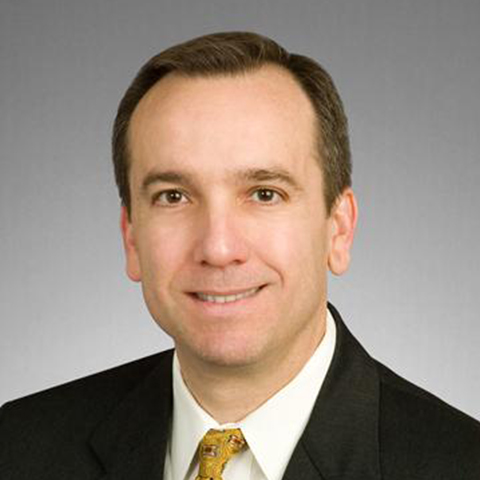 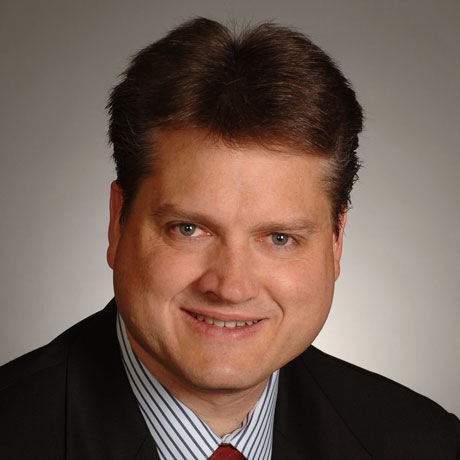