Our Expertise Insights Cryptocurrency Unmasked, Part 2: Are Cryptocurrencies Sustainable?
An analysis of Bitcoin’s industrial architecture suggests the long-term economics for “miners” are a bit shaky.

From an industrial standpoint, the supply side of the Bitcoin network is composed of nodes and miners (see Figure 1, “A Primer on High-Level Cryptocurrency Network Architecture”). Nodes are key to the privacy, anonymity, and general blockchain-accounting of the Bitcoin network, and key to facilitating transactions between parties. 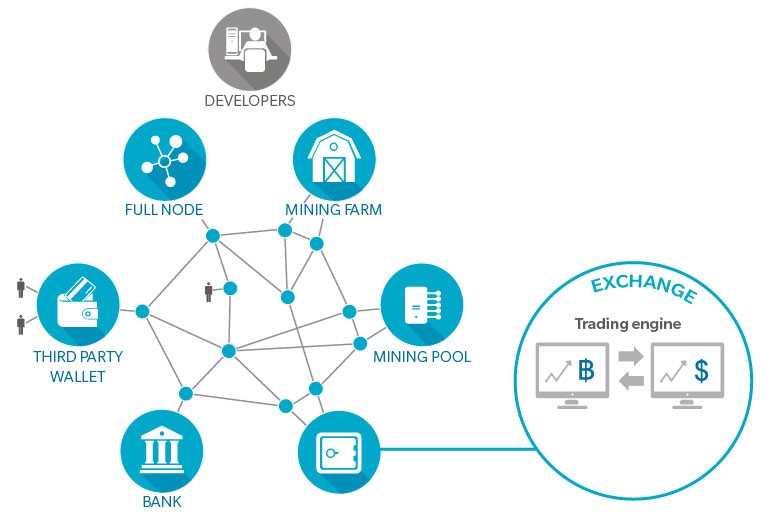 3. Miners expend computational power to generate blocks of verified transactions and collect a reward for solving cryptographic riddles. The first miner to solve the cryptographic riddle associated with the next block is the only one to be rewarded. As the riddles are progressively more difficult to solve, more computational power is required, putting miners in a competition for resources.

Miners have settled on two main operational models: Farms, which are large datacenters usually filled with dedicated hardware; and Pools, which join together thousands of single users to share computational power (with a fee to the Pool manager), increasing the probability of mining success.

4. Third-party Service Providers run businesses on the Bitcoin network for Bitcoin users. The largest such actors are Exchanges, which hold both cryptocurrency and traditional currency (fiat), and allow users to trade on their systems. Exchanges implement Know Your Customer (KYC) procedures and have bank accounts to store fiat, keeping track of users’ transactions on their databases.

Miners work to solve cryptographic riddles and add new blocks to the blockchain. Each block contains new coins, plus a number of unconfirmed transactions. Miners’ revenues come from these two sources: (1) the transaction fees paid by users, which resulted in January 2018 in ~ $7 million of revenue per day; and (2) the reward granted by the system in the form of newly minted Bitcoins, whose value is a function of the market. In January, miners earned rewards of ~$32 million per day from new coins (see Figure 2. “Average daily bitcoin rewards for miners”).

ECONOMICS OF SOLVING A BLOCK

By design, when the Bitcoin system was set up in 2009, the last Bitcoin was projected to be mined in 2140. Well before that, however, in 2029, the number of coins will be eight times less than it is now, and will be increasingly marginal over the longer term.  Today, 12.5 Bitcoins are granted to a miner who solves a block; in 2021, the number will be 6.25; in 2025, the number will be 3.125; and, in 2029, just 1.5625. Clearly, revenues from the reward of mining new coins will tend to zero, as the number of remaining coins available in the system declines.

Miners’ costs are a combination of energy consumption and the purchase of the software/hardware equipment (and, of course, their time). Because the cryptographic riddle becomes more and more complex (Bitcoin is designed so that miners solve one block every ~10 minutes), miners need to grow their computational power at least at the same rate as the system’s increase in complexity, otherwise they will reduce the probability of solving blocks, and thus see a dip in revenues and profits. Increased computational power, however, has a cost, and it also means increased energy consumption, which definitely puts pressures on profits.

If the difficulty of the cryptographic riddles increases at the same rate as it has in the past two years, and the bitcoin currency value and transaction fees remain as they are today—which won’t necessarily be true—the cost/reward ratio could be higher than 1 (cost exceeds reward) by 2025. (The reward, of course, is a function of the free market value of the coin, which has fluctuated wildly in the last year.)

Let’s say Alice wants to send Bitcoin(s) to Bob. In the simplest scenario, both Alice and Bob rely on service providers that store their bitcoin wallets and run a full node.

However, the current math on transaction fees alone (without coin rewards) does not look good for miners. With average transaction fees at $20, most accounting estimates miners in the U.S. face an average full cost of $30-$42 (considering industrial energy prices and equipment costs). Chinese miners are in a better position—because of lower energy prices, their full cost is roughly $26-34 per transaction—but still face unfavourable economics. In addition, these estimations may be optimistic, since they are calculated based on the difficulty of solving the cryptographic riddle, and not on the real total computational power available. In our own calculations, considering the daily energy index consumption as a proxy to estimate the computational capacity, we calculate an increase of ~30 percent of the above cost figures ($55-$85 in the U.S. and $45-$66 in China).

If miners are rational agents, they should keep mining until the sum of fees and new coins associated with a block, multiplied by the probability of success in solving the block, equals the total sustained cost (energy consumption + equipment). For the moment, it is clear that large miners are still extremely profitable, mainly because of the rewards they get from new coins, at present market value. But, as the number of coins diminishes, the transaction fees will need to increase to cover costs. That is some ways off, but definitely a major factor in long-term sustainability.

In the last four months, for example, the transaction volume has steadily decreased from the peak reached at the beginning of December 2017. If this trend continues, it will definitely pose a major threat to the long-term sustainability of Bitcoin; if Bitcoin doesn’t circulate, its value will diminish over time. On the other hand, if Bitcoin becomes a more popular/widespread means of payment, the daily transaction volume should increase—via increase of the average number of transactions per block or increase of the average transaction value.  And that leads to the issue of scalability, addressed in Cryptocurrency Unmasked, Part 3.