Not if big miners centralize power.

By Angelo Rosiello and Luca Giavazzi

In two previous articles (Part 1 and Part 2), we analyzed Bitcoin’s industrial architecture as a means for determining the security and sustainability of cryptocurrencies. Both are issues to consider before making major investments in cryptocurrencies.

Bitcoin’s security is good, although not perfect. The preservation of its sustainability is a function of the economics and the opportunity for miners to profit, because without these solvers of cryptographic riddles, the network is useless. But equally important is Bitcoin’s scalability—can it grow enough to reach millions of consumers around the world to create a viable and dynamic market for coins and transactions?

It is important to frame the scalability issue in two distinct but tightly linked aspects: scalability of the number of transactions (the “everyday users” point of view), and scalability of the infrastructure (the “industrial” point of view), in order to prevent oligopoly among few players. It is paramount to focus on the first scalability aspect if the objective is to make cryptocurrencies an everyday payment method for consumers, while the second is somewhat more important if the objective is to make cryptocurrencies a universally accepted “value reserve,” used to store and transfer value.

From the perspective of the everyday user, Bitcoin might appear scalable, especially if changes to the transaction mechanism improve (as we discuss below). But, given Bitcoin’s block size of 1MB, and an average transaction size of 250 bytes, each block can only handle 3-7 transactions per second. Visa, on the other hand, processes 24,000 transactions per second! And, there is a more problematic aspect that is proving hard to resolve, and it will have a direct impact on scalability and healthy growth—the industrial dynamics that favor large players. This is likely to cause trust issues that undermine the consumer appeal of the network.

To date, Bitcoin smartly solves the problem of trust between non-cooperative parties, letting the network reach a majority consensus around which blocks of transactions are valid. However, Bitcoin rules imply that anyone who controls more than 50 percent of the computational power of the network can decide what is “true” and what is “false.” In order to guarantee the trust principle, the best possible stable state for the growing network would be to have a large number of relatively small miners (a low level of concentration), rather than a small number of relatively large miners.

In practice, however, the industrial dynamics underlying the solving of increasingly complex riddles are pushing the network in a different direction. In fact, high capital requirements for continuous investment in new hardware and economies of scale to maximize energy efficiency encourage the concentration of mining power, making small players quickly obsolete and unprofitable. In January, for example, three China-based pools (BTC.com, AntPool and BTC.TOP) controlled a fluctuating share of almost 55 percent of all mining computational power (see “Four days average hashrate distribution”). Although one might argue that it would be against their long-term interests, the three actors are a phone call away from collaborating to control Bitcoin transactions. Even if that never happens, the computing power is controlled by a surprisingly small group of miners, a function of the need for more power and energy. For now, miners’ profitability is high (making them a prime target of cyber criminals), but if and when profits decline (as the block reward diminishes, or as the mining mechanisms are modified), there is likely to be even more consolidation. Smaller miners will simply not be able to keep pace. After the Pool GHash.io temporarily surpassed the 51 percent mark in 2014, a number of cooperative miners established a committee whose participants decided to abide to an arbitrary 40 percent hashrate cap but, of course, not all miners have agreed to that. 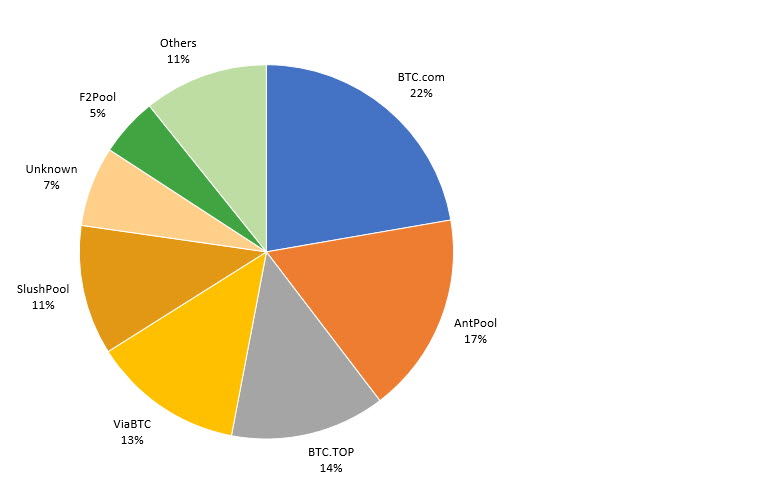 Different countermeasures have been put forward to try and solve the scalability issue. But, while they have the potential to improve scalability from the users’ perspective, all of them would generate a cascading effect that would centralize the network again.

The main technical options available today to improve scalability are to increase the size of a block, implement a different block-verification mechanism, or add layers to the base protocol.

Increasing the block size allows more transactions in a single block. This reduces the length of the queue of transactions waiting to enter a block and be cleared, shortens transaction verification time, and reduces transaction fees (because a shorter queue means fewer transactions bidding for a position in the block)—making Bitcoin more suitable as a consumer-payment method. This solution is quite effective at reaching these objectives and it has been implemented in a different cryptocurrency, Bitcoin Cash. In fact, block size is the most relevant difference between Bitcoin and Bitcoin Cash (from 1 MB to 10 MB).

Increasing block size, however, has some significant drawbacks, which is why the majority of miners and users did not switch to Bitcoin Cash. First, the ‘solution’ doesn’t solve the problem, but just kicks it down the road. If the use of the cryptocurrency increases as enthusiasts expect, there will come a time when the blocks are “too small” again, and a new consensus would have to be reached about when and how much to increase block size again. This is a complex process, because every actor has to willingly and actively change their software, roughly at the same time. Second, increasing block size has negative impacts on network reliability and concentration. Bigger blocks take more time to reach all the nodes, making synchronization tougher, and partition attacks or time-based attacks easier to pull off. Moreover, in order to process bigger blocks, miners need more memory, more powerful hardware, and a stronger broadband connection. This would reduce the number of nodes participating in the network (both actual and potential), making Bitcoin less diffuse, more concentrated in the hands of big industrial players, and ultimately less open/free and inclusive.

Regarding block verification, the logic implemented in the protocol is at the heart of how cryptocurrencies work. Modifying this logic can have massive impacts on how the entire industry is shaped. The logic implemented in Bitcoin today is called “proof of work.” According to it, the only new valid block is the first one to be broadcast to the network with a valid cryptographic solution for the correlated puzzle. It requires a “proof” that the miner has competed some cryptographic “work.” It is because of this logic that miners amass computational power, relocate to where electricity prices are lowest, and use exorbitant amounts of energy to compete for the block reward.

One proposed alternative to block verification, which has been implemented by a nontrivial number of smaller cryptocurrencies, is the “proof of stake” mechanism. This doesn’t require massive computing power and energy because the whole mining dynamic is reduced to almost zero. The right to create new blocks is attributed to “forgers” based on an evaluation of how much “stake” a user has in the network. With structurally lower costs, energy consumption, and computational power, forgers need a fraction of the revenues that miners require today to break even. Transaction fees are lower and transaction clearing is orders of magnitude more efficient.

But…it turns out to be operationally more complex to implement than today’s “proof of work” logic and no major cryptocurrency is currently using it (although Ethereum has indicated its intention to switch to it). As far as scalability is concerned, while computation and energy consumption are almost brought to zero, the network concentration issue is not solved. It is exacerbated, if possible. The “stake” you need in order to be awarded a block is a combination of the quantity of cryptocoin you are holding, the “age” of the coins you have (a measure of how much you use them or of how long you’ve had them for), and some version of a randomization function that brings some noise into the process. Proof of stake serves the purpose of stimulating the use of coins and rewarding people who effectively participate in the network, but it has the side effect of generating centralization—because the more coins you hold, the more likely you are to be awarded blocks and hence to amass more coins.

If it turns out that scaling is as problematic as it feels today, that does not bode well for Bitcoin’s long-term sustainability as a universal means of payment.

Another alternative solution to the scalability issue, regarded by the Bitcoin community as one of the best, is called Lightning Network. The Lightning Network is a new layer built on the Bitcoin protocol that creates bidirectional-exchange channels between nodes. In theory, it allows for faster transaction verification, lower fees, and orders of magnitude more transactions per second. The network is comprised of user-generated channels that send payments back and forth in a secure and “trust-less” fashion (you don't need to trust or even know your counterparty). When the transactions are just between two people and don't need to be broadcast to the whole network, they are almost instantaneous. And because transactions are not registered on the blockchain one by one, fees on average are substantially lower.

A good way to visualize the Lightning Network is to think about a transaction between user A and user B as a series of bidirectional transactions (“hops”) between directly linked nodes—A -> C, C -> D, D -> E, E -> B—routed as if a transaction were a “package” on a peer-to-peer network. Practically, this happens by opening channels between users and “locking” funds in these channels until all the transactions going through them are settled. The problem with this idea is twofold. First, for any given user, the amount required in the locked box may be much larger than the transaction she is trying to execute. Second, the need to route transactions through nodes that have enough funds to fuel hops, combined with the naturally uneven wealth distribution and hub-spoke network structure, would centralize transactions traffic on a limited number of big hubs (we explored a similar dynamic in Part 1, noting that Bitcoin is very ISP-centralized).

It will take another year to see how the implementation of these ideas affects the scalability of cryptocurrencies. (Block size has been increased in BitcoinCash, the lightning network is being tested for Bitcoin, and Ethereum is contemplating “proof of stake”). And, if it turns out that scaling is as problematic as it feels today, that does not bode well for Bitcoin’s long-term sustainability as a universal means of payment. But it also may be key to determining the long-term usefulness of cryptocurrencies. They could, ironically, provide a universally recognized single unit of value usable by central and commercial banks, a possibility we explore in Cryptocurrency Unmasked, Part 4 (“A Future Scenario for Blockchain in Financial Services”). The Bitcoin expert community is leaning towards this vision, while the idea of using Bitcoin as everyday cash is diminishing as an end goal.