This article was first published on March 20, 2020

The coronavirus has impacted a number of industries in unprecedented ways, with electric utilities around the globe being no exception. Utilities, in particular, are faced with handling supply chain disruptions, managing a remote workforce, minimizing the risk of infection, and operating with a reduced field workforce. Furthermore, as social distancing prompts educational institutions to move to virtual instruction, corporations to shift to a work-from-home model, restaurants to pivot to take-out only operations, and manufacturers to reduce or halt capacity, utilities will experience significant shifts across the Commercial, Industrial, and Residential customer demand profiles. This, in turn, presents a larger economic threat that utilities need to confront in order to ensure success for the long-term.

Utilities will experience significant shifts across the Commercial, Industrial, and Residential customer demand profiles as a result of the coronavirus

Changes In Demand For Electricity

While changes in oil prices have been making headlines, the impact of the coronavirus on electric demand is quickly following suit. The earliest indications come from Italy and Spain where data is readily available. According to Terna, the Italian transmission operator, demand for electricity on Tuesday, March 17, 2020 decreased 17 percent in comparison to the previous two Tuesdays, and 15 percent compared to Tuesdays in March over the previous five years. In France, relative to 2018, demand is down as much as 22 percent, according to the European Network of Transmission System Operators for Electricity (ENTSO-E). The Wall Street Journal also reported an 18 percent drop in overall power demand for Italy relative to the period prior to restrictions as a result of coronavirus.

In North America and other regions outside of Asia, where the spread of the coronavirus is several weeks behind that of Italy and Spain, similar trends are expected to follow. The closure or limiting of activity in public places—such as restaurants, schools, and shopping malls—coupled with recent industrial announcements such as the temporary closure of Ford and General Motors plants, could lead to a demand drop ranging from 15 to 20 percent. Additional expected shelter-in-place orders in cities or counties will accentuate this drop. And with manufacturing plants operating at reduced capacity—either due to social distancing limitations or a lack of input materials—as Europe is now starting to see in manufacturing, will further contribute to electric demand lessening. Consequently, initial residential demand spurred by the novelty of working from home—including remote workers using laundry machines and dishwashers during work hours—may see a brief uptick before it normalizes to create a net loss for overall demand.

There is an array of scenarios for how long the situation is likely to last, which are primarily driven by the impact of public health efforts and an emerging mitigating factor such as seasonality driven by weather in the Northern Hemisphere. These time horizon scenarios are as follows:

Regardless of which scenario plays out, utilities will face several challenges from a load and financial perspective for 2020 and, potentially, beyond. These challenges will occur despite lost revenue decoupling mechanisms for electric utilities that are in place for a minority of United States jurisdictions.

Notwithstanding the existing decoupling protections for revenue shortfalls currently in place in six states, a one percent demand decrease for each of the five largest US utilities can lead to an annual revenue loss of $50 to 100 million, suggesting a prolonged 15 to 20 percent drop in demand would result in aggregate revenue impacts in the billions for the industry.

While each utility will be impacted differently due to localized conditions and decoupling mechanisms, considering the overall impact on Commercial and Industrial versus Residential load and rates, Oliver Wyman estimates that the aggregate overall impact to the top lines of US investor-owned utilities could exceed $20 to 25 billion if the pandemic extends more than 12 months.

The Near-Term Economic And Operational Impact

Impacts ranging from plant economics to workforce implications could disrupt utilities in a variety of aspects, and utilities should be prepared to address workforce productivity, effectively manage O&M costs, and work through existing arrangements with suppliers and contractors to shore up value.

From an economic standpoint, utilities need to be mindful of the reduced ability cover O&M costs in the near-term, while those with no decoupling mechanism also need to be vigilant of reduced planned revenues. Utilities should also expect a potential reduction or reallocation of planned capital expenditures over the next several years. Navigating a revised capital program with an increased focus on program economics and value delivered will help ensure that programs necessary for critical safety or reliability initiatives are able to be maintained.

In terms of power generators, changing load patterns will likely impact market prices. In deregulated markets, unpredictable demand skews market prices of power, challenging the economics of some generators which will challenge independent producers. Likewise, lower demand reduces profitability of individual plants, as all assets are not called for on dispatch. The transition to renewable energy currently underway in many locations will also be impacted due to fluctuating economics of fossil-powered assets.

As the pandemic extends, generation curtailment, already starting to take place in Europe, will likely occur in other jurisdictions around the world. In this case, the market mechanisms currently in place will need to be reviewed, as is starting to occur in certain European markets this week.  An extension of the pandemic of more than 12 months could mean significant re-adjustments of markets which will substantially challenge utility revenues.

From an operational perspective, there will be a disruption to the workforce, and potential reduction in overall productivity, resulting from both the illness itself as well as a limited ability to perform critical job junctions onsite.  Utilities able to enhance the productivity of on-site critical personnel as well as find ways to maximize efficiency of workers who are performing ‘newly remote’ functions will better weather the pandemic.

Persevering In The Short-Term

To manage the short-term demand implications on revenue and prepare for a recovery, there are a variety of actions for utilities to consider. 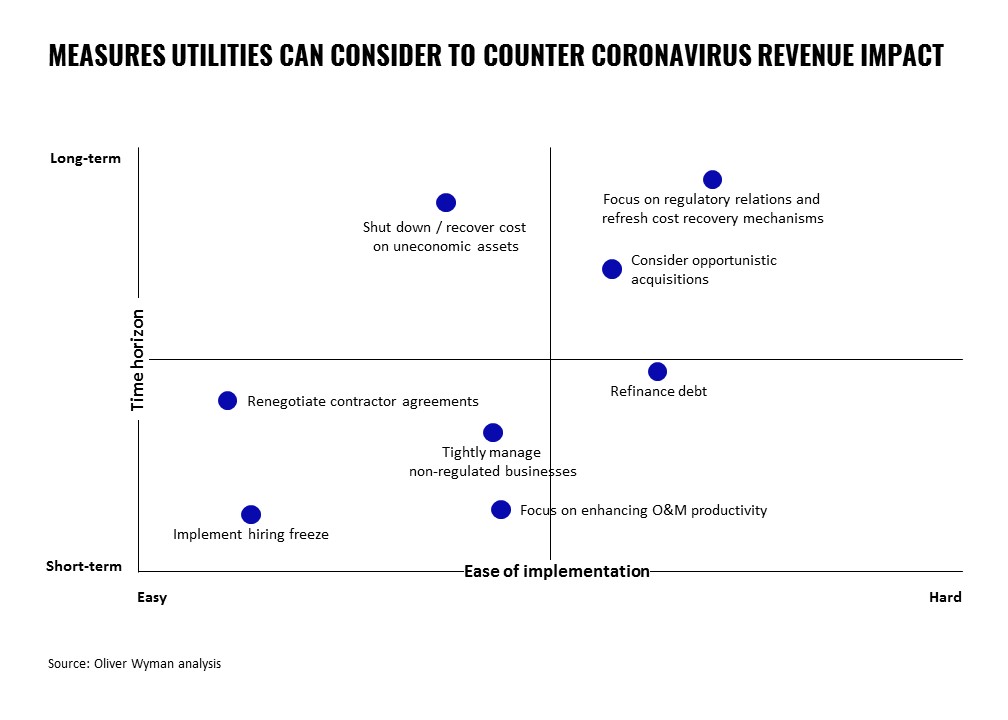 The cumulative effect is expected to create uncertainty not only for ongoing and near-term initiatives, but also impact longer-term regulatory strategy and planned asset development.

Regardless of which scenario plays out for the pandemic, utilities will need to take a variety of actions to recover from the residual effects which may be just as challenging as the trials faced in the initial downturn.

First, they will need to re-prioritize a backlog of critical activities as the economy begins to revitalize. Utilities will need to understand which O&M and capital investments will yield the most impact. As the recent suspension of certain reliability and audit activities by FERC and NERC are put back into place, there will be a large backlog of work activities that will not only need to be urgently performed, but will need to be performed at a new level of productivity in order to avoid a steep spike in costs and further delays. And with the market in recovery, prioritizing investment opportunities that are the most market-resilient as well as increasing manpower for these activities in a recovery market while other industries are competing for labor will be critical to success.

To prepare for the possibility of another event—such as a cyber or terrorist attack—coexisting alongside a repeat pandemic case, it is essential that utilities devise new contingency plans without duplicating other risk mitigation investments.

Recent days have tested organizations globally on effectively managing a crisis, and utilities are fortunately well-prepared and well-versed.  However, as impacts related to the coronavirus continue to compound across economies and geographies, utilities will need to effectively manage their complex strategic and operational capabilities to succeed in the long-term.