Preparing For The Age Of The Digital Attacker

Our Expertise Insights Preparing For The Age Of The Digital Attacker

This article first appeared in BRINK on February 26, 2019.

“Forty percent of businesses … unfortunately, will not exist in a meaningful way in 10 years,” John Chambers, retired Cisco CEO, once predicted in 2015, adding that while 70 percent of companies would attempt to go digital, only 30 percent of those would succeed.

Over the past decade, the industry has witnessed a radical shift in the perceptions of value proposition—from incumbent multinationals to responsive and scalable digital entrants reinstating their relevance for markets. While the phenomenon is often referred to as disruption, it presents a glorious opportunity for embracing value creation by embracing new-age digital principles.

Between 2014 and 2019, the number of unicorns has sharply risen from 38 to 325 globally. Additionally, they have continued to expand in terms of their valuation, and today, 20 of these companies are “decacorns”—companies valued at over $10 billion. These numbers not only reflect phenomenal growth at an unprecedented scale but also a burgeoning optimism that speaks volumes about the needs and aspirations that were largely unaddressed by existing players. Meanwhile, in the same period, the total market capitalization of the top 10 banks has increased less significantly from $1.7 trillion to $2.3 trillion.

Speaking in context of the financial sector, banks and insurance companies across the world are currently experiencing an era of hyper digitization. Traditional banks face disruption from various quarters, making it imperative for them to evolve to remain profitable over the medium-to-long term. The disruption is starkly evident as new entrants pose a formidable threat to the incumbent banks.

The shift in value proposition is clearly pointing to the mastery of new entities to dominate the world stage.Impact on Incumbents
Incumbent banks need to watch out for these digital attackers or neobanks because not only do they serve as an alternative to banks, they are also leaders in adopting technology, helping customers and businesses to uproot legacy technology that plagues traditional players. As of 2018, these new entrants have accumulated up to one-third of new revenue in the global banking industry. As banks adapt to the changing ecosystem, there are four driving forces that they must be cognizant of.

Disruption in the financial services sector is posing formidable challenges for incumbents. This is largely due to the various products and services new players offer that incumbents are still getting accustomed to and trying to adapt.

For example, today new generation neodigital attackers can offer a highly targeted value proposition enabled by data and analytics, achieving a return of equity (ROE) rate of over 30 percent. On the other hand, a universal bank with a digital offering provides a broader value proposition and receives a lower ROE of 15-20 percent. The new players also have a shorter time-to-market for dynamic product offerings, while the universal bank typically takes six to 12 months with its in-house solutions and products.

Additionally, new players don’t have large legacy infrastructures, making it easy for them to change direction and strategy if needed—something that large incumbents with well-established infrastructures cannot do as swiftly. The new generation digital bank has a lean data infrastructure that allows easy access to any data for quick development in almost real time. It also has an agile modular IT architecture with advanced functionality. A universal bank with digital offerings will pale in comparison with its complex data infrastructure, traditional data analysis techniques, and rigid IT infrastructure.

Neobank Product Offerings and InitiativesA neodigital attacker is one that typicallyhas no physical locations and serves its customer primarily through digital platforms. Most neobanks, such as Pockit and Monzo, start by launching core products such as current accounts, cards and payments. Only a few independent neobanks, such as Atom Bank and N26, have ventured into the credit domain. This is easier for subsidiaries of institutions with credit decision capabilities.

In addition, Openbank and Oaknorth, for example, have also added products such as savings or insurance-to-date, with most using third parties for such offerings.

Benefits of Adapting a Challenger ModelAt the current rate that digital attackers are progressing and evolving, traditional financial services firms will need to learn to disrupt, or they will be disrupted. Incumbents can gradually move toward a challenger model by swiftly adding new digital capabilities on the top of their current model.

These are some key benefits of the challenger model for incumbents:

EXHIBIT 1: THE OLD VERSUS THE NEW 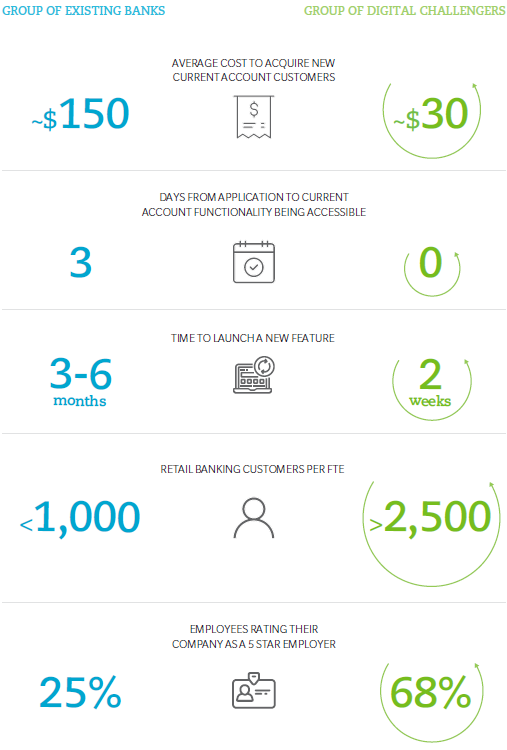 Greenfield As a Catalyst for Bank TransformationWe refer to this incumbent strategy as the greenfield approach (Exhibit 2). As an incumbent, imagine if you could combine what is possible in a new build with the business model advantages of an existing firm, such as the established branding, funding, customer base, regulatory approval and existing data.

Existing players are starting to realize the merits of starting afresh. The National Australia Bank, for example, recently launched QuickBiz, an unsecured digital lending solution that has become a key channel for small business. Another is Nexible, built by German insurer ERGO as a challenger proposition to its auto-insurance business.

There are ways for incumbents in the banking industry to tackle the disruption. Banks need to be flexible and can potentially embed third parties within their bank platforms or originate and/or embed their own products on third-party platforms. Additionally, with scalable and secure technology platforms, they can also support or launch “microbanks” or even provide ecosystem customers with third-party apps.

Traditional players can look at greenfield as a transformation catalyst for change. In fact, it is now possible to deliver a major greenfield business with an experimentation flywheel approach in 12 months, starting from an experiment phase, to pilot, scale up and finally run it.


EXHIBIT 3: GREENFIELD IN AN INVESTMENT PORTFOLIO 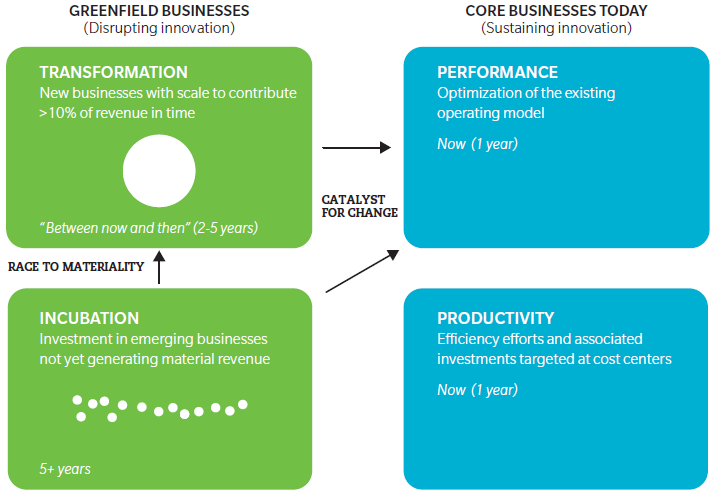 The return on each investment will be uncertain, but the funding required is stage-gated. The investment funds allocated are also within the scope to scale up the most promising ideas.

Additionally, governance is no longer about big multiyear budgets with fixed, microdetailed deliverables. Shareholders can see how the portfolio aligns with the company strategy, both in terms of growth or addressing disruption threats.

The rapid pace of digitization and the infiltration of new tech players into the financial sector is compelling incumbents to get onboard the tech bandwagon or risk missing out in the current digital era. Incumbents will increase their chances of holding their own if they start taking action now.

*More about the greenfield approach can be found in Oliver Wyman’s State of the Financial Services Industry 2019 report. 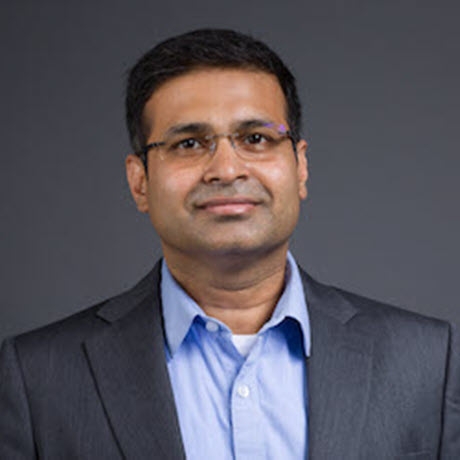