Megatrends And The Future Of Industry

Our Expertise Insights Perspectives On Manufacturing Industries Vol. 12 Megatrends And The Future Of Industry
The manufacturing industry has enjoyed a decade of healthy growth since the financial crisis by optimizing existing products for established markets in a favorable business environment.

From this point forward, however, the big growth opportunities will come in new markets, as a wave of megatrends generates new prospects for manufacturers. We expect these new markets to be worth US$1 trillion over the course of a decade, as large parts of industry are revolutionized, resulting in a new generation of corporate winners.

US$1 trillion worth of new markets is expected to develop over the course of a decade.

These megatrends are a combination of technological leaps and upheavals in global society and the environment that will reshape economies, businesses, and lifestyles. Environmental and population pressures require cleaner energy and better-functioning cities, for example. These forces are driving the demand for renewable power and smart transport systems to ease congestion. Technological answers include an increase in energy storage capacity, which will improve the range of electric vehicles and smooth out the supply of renewable power amid weather changes. More generally, smart products will bring digital intelligence to new places, as sensor-equipped machines become increasingly autonomous thanks to decision-making software. Within corporations, functions that appear to have little to do with number crunching – such as sales and human resources – will be aided or taken over by robotization and artificial intelligence. (See Exhibit 1.)

Exhibit 1: Megatrends are global and sustained forces that will certainly impact and shape economies and societies

Previous cycles of major change have overturned the industrial order. Technological change and disruption comes in waves, as global trends and innovations mutually reinforce each other. The result has been super-cycles lasting several decades, which have transformed the world, changed the way we work and live, and created new sets of global market leaders.

The wave that started in the 1910s was defined by oil, electricity, the automobile, and mass production. These enabled the development of the modern city, infrastructure, and transport as we know them today. The cycle from 1960 – based on semiconductors, telecommunications, and automation – made possible globalization, outsourcing, and lean manufacturing. These techniques created our current global production systems, product proliferation, and mass customization. (See Exhibit 2.)

The next super-cycle will in many ways be faster and more dramatic, with some markets likely to grow at 40 percent a year for a decade. The growth will come from new sources, which will act as the launchpads for whole new ecosystems. Large manufacturers will find the new era challenging, and will need to figure out how to create products that allow them to participate in new markets – often outside their traditional comfort zones.

The speed of innovation will shorten product cycles. Since the big advances will come from software – which can easily be scaled, quickly and globally – there will be a tendency towards winner-takes-all markets, where the top product grabs overwhelming share. Competition to become this winner is already producing mega-startups.

Unlike in the past, when new enterprises faced pressure to launch an IPO if they wanted to expand, they are able to take the longer view, thanks to their ability to tap into rounds of private financing. More critical than financing will be finding the right talent – a challenge shared by both startups and incumbents.

Some startups will be at the center of new industries. Genome sequencing, for example, can forecast a person’s likelihood of developing particular diseases, thus enabling targeted preventive care. It can also enable more precise therapeutic interventions in patients with cancer or rare diseases. However, DNA decryption has been very expensive – until now.

Companies such as San Diego-based machine producer Illumina are pushing down the cost of genome sequencing, enabling an expansion of direct-to-consumer testing services. By keeping its product cost low, Illumina is helping to create a new ecosystem. We expect the market for such machines to grow around 20 percent a year, from US$4.4 billion in 2016 to US$22.1 billion in 2025. Future possibilities include the compilation of a large data base of genomic information – a kind of Google of personal health care.

The growth in genome sequencing is the result of megatrends including health and wellness, life-science advances, and aging societies. Other sectors will feel the impact of different megatrends. A boom in drones, for example, will come thanks to advances in digital and data and in smart devices – though drones’ potential applications in remote facilities mean they could also be linked to megatrends like resource scarcity and natural catastrophes.

The peculiar nature of change during a super-cycle can be seen in autonomous vehicles, whose influence extends far beyond the auto industry. Like other connected devices that form the Internet of Things (IoT), they will depend heavily on sensors to locate road markings, obstacles, and other cars. Processing all the data these sensors collect will drive growth in IoT software and platforms – a market that is worth US$34 billion now but is likely to grow 15 percent a year, to US$120 billion in 2025. (See Exhibit 3.)

Exhibit 3: New markets worth more than US$1 trillion will emerge 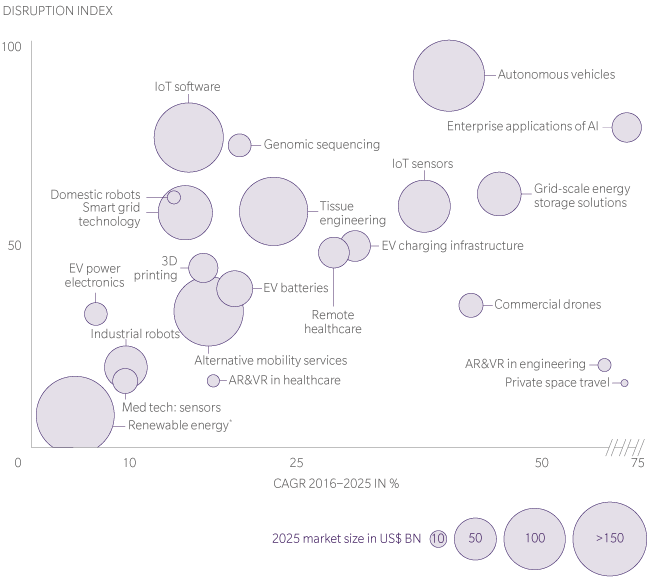 Autonomous transportation will generate new product markets beyond driverless cars, such as freight vehicles, ships, trains, trams, and drones. Some of these will carry out deliveries – to consumers or between businesses – while others will take the place of regular cars driven by humans. All have the potential to trigger new service markets – and it is still unclear what shape these take, let alone which providers will dominate.

While most traditional automakers are working on autonomous technology, digital players such as Google, Amazon, and Apple are participating too. Some of them may end up dominating parts of future vehicle development: Waymo, the Google-backed autonomous-driving venture, has already logged 4.8 million km of test drives. In some cases, drones will replace land-based transport. Ehang of China has developed a drone that can carry a passenger for 23 minutes, or a distance of 32 km. The first orders have come from Dubai, and we estimate that a quarter of individual transportation in the Gulf states will be carried out by drones.

Megatrends will change the industry and the world we live and work in, bringing huge business opportunities. However, many of these will be seized by new entrants, some of which will grow into unicorns – private companies valued at US$1 billion or more. One reason for entrants’ outsize role is that megatrends only have a limited impact at the beginning, before they eventually take off and break existing business models. The long build-up means that large companies can underestimate the power of megatrends or assume that they have already integrated them into their plans.

So, incumbents need to strategize in a new way in order to participate and lead in the new markets. They can start by taking an outside-in approach. Normally, they start with their competencies and assets and then work out what products they can make, and which customers might buy these. During a super-cycle like the one starting now, the focus should first be on megatrends. Firms will need to understand what impact these will have on customers, and how they can provide these customers with solutions. After that will follow the development of the required competencies and assets.

This will not be easy, since many of the opportunities lie outside incumbents’ core businesses. Some have already begun to rearrange their skillsets to prepare for the super-cycle. That can mean buying software businesses to acquire new competences, as well as investing in startups that are pioneering technology with the potential to be at the center of a growing ecosystem. It can also mean selling off units – such as types of hardware – that are peripheral to their strategy for the new era. The nature of opportunities in this super-cycle means that incremental changes won’t be enough, and a multitude of small investments is unlikely to work. Instead, incumbents must go all-in to meet the new demands.

How to Benefit from Megatrends

The megatrends will not all affect every manufacturer. But some of them will almost certainly have specific impacts on particular industries and corporations. The first step for a company to thrive in the new era is to identify which megatrends affect it and how. Then it can implement the outside-in approach and figure out the best approach to the new opportunities: which new markets to target and the different possible strategies for doing this. That might mean new business models based on new capabilities, which could be obtained through a variety of means: in-house development, partnering, acquisitions, or an in-house startup fund, to give some examples.

Now is the time to go beyond the optimization of existing businesses and reflect more fundamentally on where to play – and how to win – in the coming wave of megatrends.

Megatrends And The Future Of Industry