Our Expertise Insights European Consolidation In Payments
The European payments market is undergoing an unprecedented wave of consolidation with intensive M&A in payment services related to acquiring and broader merchant servicing. This raises several questions around the reasons for this, but also the impact for banks and merchants, and the outlook for the future.

The payment landscape has changed a lot since 2000: after decades of domination by banks, they are losing ground with strong third party players emerging in Europe. 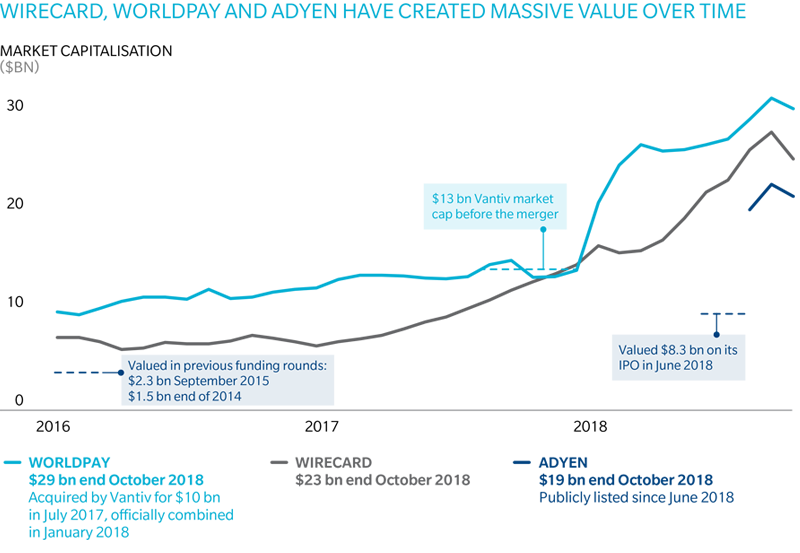 In the last 10 years, the market environment has changed and apart from banking players like Barclaycard, Credit Agricole and Credit Mutuel, pure players like Worldpay, Worldline, SIA, Ingenico, Nets, have grown substantially with new players like Adyen and Wirecard now also strongly established.

This evolution was possible because many banks sold their activities for business reasons, such as Unicredit whose payments business was bought out by SIA in 2016.

Why there’s been a wave of consolidation in European payments

Banks sold their payments businesses because they were not able to sustain and adapt to numerous challenges: commoditization of traditional payment activities like processing and acquiring and the need for strong technological skills and agility to position on e- and m-commerce capabilities, which has now even increased with merchant requests around omnichannel.

They suffer from a lack of capabilities (agile leading-edge IT platform, R&D, strong innovation…) in a market in which technologies are developing (NFC, biometrics, wallets, blockchain, chatbots, virtual reality, etc). IT integration know-how is the key to fit into merchant environments, while in banks most investments are absorbed on compliance spending. Data analytics are also increasingly requested, but banks have not sufficiently developed these capabilities to date either.

The current wave of intensive M&A is driven by the growth potential of the market. Natural growth of about 5-6% in digital transactions is supported by the fact that around half of all transactions in retail are still in cash, which can be converted into revenue-generating transactions. The market need for innovation, and the interest of merchants in these sales increasing services, drives the need for volume concentration in Europe, where fully pan-European players are still missing and some players wanting to grow through consolidation.

Two types of player lead the M&A movement: payment players and PE funds. The players want to increase the volume of transactions to grow and amortize the cost of platforms and expand along the value-chain by becoming complete service providers. Worldline, Worldpay and Ingenico are examples of this category which we could call the “expanders”. The second category are PE funds like Bain Advent, Nordic Capital, BlackRock, CVC Capital Partners, Hellman & Friedman and Permira, which are positioned on payments due to the attractiveness of the business. 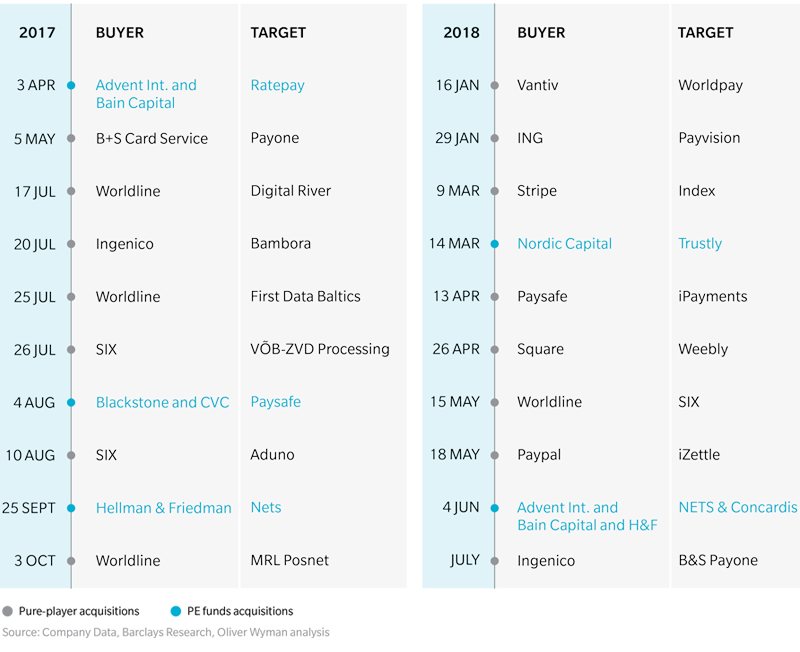 The fact that none of these M&A deals was driven by a bank indicates that they are not leading this market anymore in Europe. The size of the tickets (Nets was valued USD 5bn, WPY was sold to Vantiv for USD 10,35bn, MasterCard spent 800M€ for Vocalink etc),  along with the regulatory constraints on capital ratios for banks, make M&A less attractive for FIs.

Does that mean that one can only be successful in these payment activities if participating in this M&A run?

Examples like Adyen (NL 2006), Stripe (IRL end of 2009) and Klarna (Sweden 2005) show that organic growth and innovation by positioning on attractive segments like e- and m-commerce and related services can be successful too. These companies were able to develop from scratch from relatively small markets with no major volumes. Given their success and growth, these players can be classed as innovators or disruptors because they all focus on new value enhancing services for merchants.

Today’s market sees these two different models of expanders and disruptors coexisting. In addition, US mega-players, which have been traditionally strong players in Europe, are continuing to constantly grow, but are becoming less important than before.

What does this movement mean for banks?

Despite these evolutions, banks still play an important role in European payments, especially in acquiring, since half of all transactions are acquired by banks or bank-owned entities.

Nevertheless, the spun-off entities have shown tremendous growth –  much bigger than if they had remained in the scope of their former bank or banking-ownership, like the results of Worldpay, Nets and Concardis show.

Progressively new market leaders emerge and only five to six players appear truly European, able to support the pan-European needs of large retailers and limiting the development potential for more national market oriented banks: Worldpay-Vantiv, Adyen, wirecard, Worldline-Six, Nets-Concardis seem to be the market makers, while Ingenico and Nexi could end up in even broader mergers.

This means that banks will lose large parts of their Tier 1 and Tier 2 clients, while their Tier 3 customers are already attacked by specialists like Sum Up, Square and iZettle. Some banks even report that losing the acquiring activity drives away the client in the future.

Outlook for the European payments industry

There is still consolidation potential in Europe, and traditional acquirers and processors will continue to merge with revenue and margin driving e-commerce acceptance providers of the latest generation, in order to survive financially and stay relevant for merchants who expect a complete range of highly complex services.

Some banks focusing on payments will try to enter the M&A race, as JP Morgan Chase did recently by buying out WePay, but overall it’s unlikely that banks can run M&A as some of the major PE funds. Banks will try to position through smaller deals (such as the potential buy-outs of HiPay, Lyra and MyPos)

The real question is whether banks have anticipated what a weak positioning in merchant services and payments does to their overall business, especially when in the meantime they get attacked by GAFAs and BATX on the issuing side and in consumer and SME lending.

It is time for banks to radically leverage their assets such as an outstanding client base, security knowledge and especially a huge data from merchant and consumer transactions. They could drive the movement to digital payments and related merchant services, especially since with additional decrease of interchange it will be attractive for them to develop account-to-account payments.

But nothing will be possible for banks without a real repositioning and substantial technology investments.