How Much Do You Know About Blockchain

Our Expertise Insights How Much Do You Know About Blockchain

A version of this article first appeared in Brink

The most well-known use for blockchain is providing the platform for cryptocurrencies. This Q&A is a summary of a detailed briefing on the policy implications of cryptocurrencies that was released last month by Oliver Wyman.

Q: What is a cryptocurrency?

A: There is no commonly accepted definition, but the Bank for International Settlements defines it as a digital means of payment that lacks an intermediary (hence “peer-to-peer”) and does not represent the obligations of an issuer.

Q: Why do cryptocurrencies exist?

A: They fit in a few broad categories:

Q: How big is the cryptocurrency market?

A: Roughly $400 billion to $800 billion, but the number is difficult to estimate. The global value peaked in January at over $800 billion but tumbled to less than $500 billion a couple weeks later. 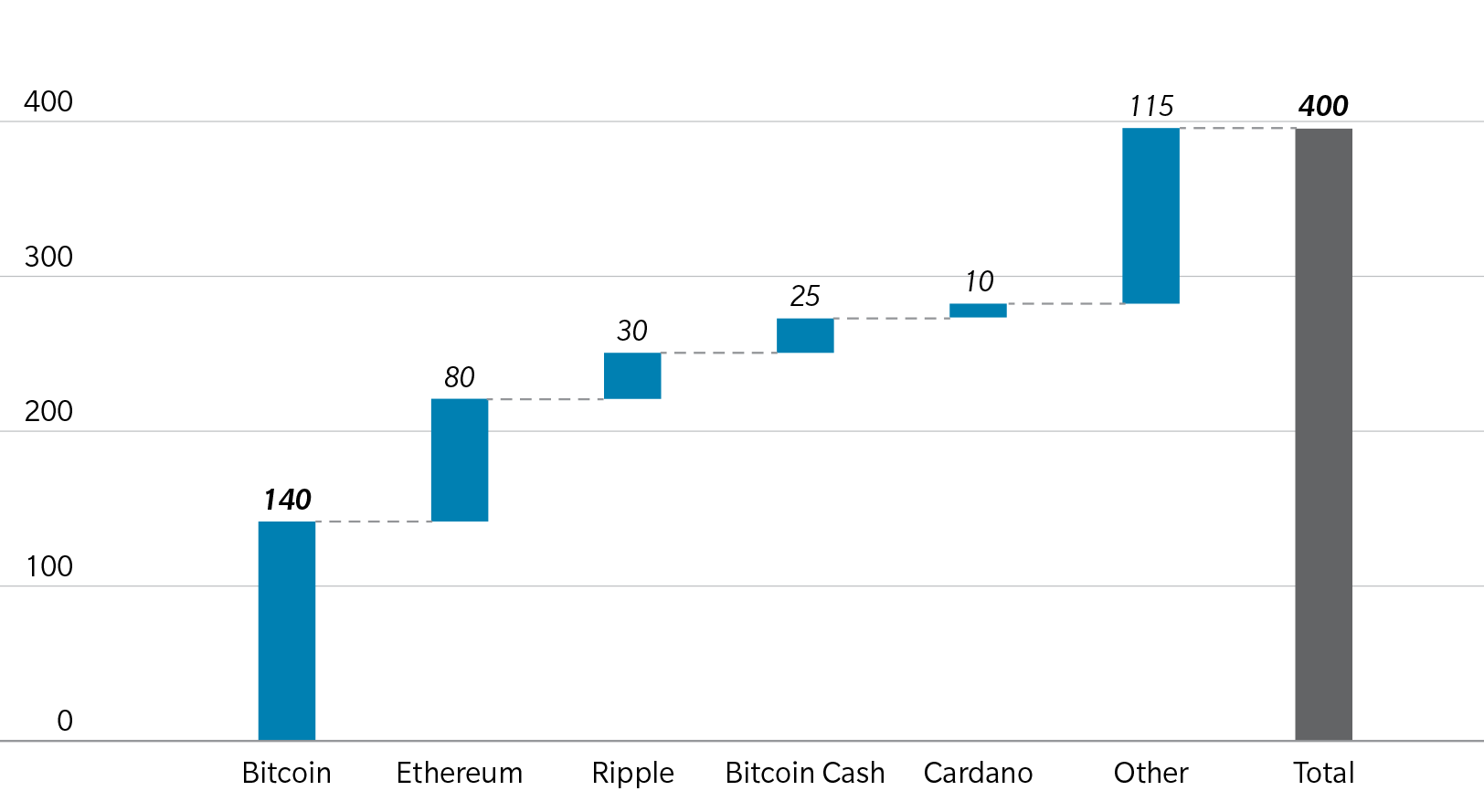 Q: How does blockchain relate to cryptocurrencies?

A: Blockchain is the underlying technology behind most, but not all, cryptocurrencies.

A blockchain is a continuously growing list of electronic records (blocks) that are sequentially linked using cryptography. This list, or “ledger,” is stored and maintained by a network of users (nodes) that collectively validates each new block and keeps synchronized replicas of the entire ledger—therefore eliminating the need for a central, trusted counterparty.

Exhibit 2: How Does Bitcoin Use Blockchain in a Transaction 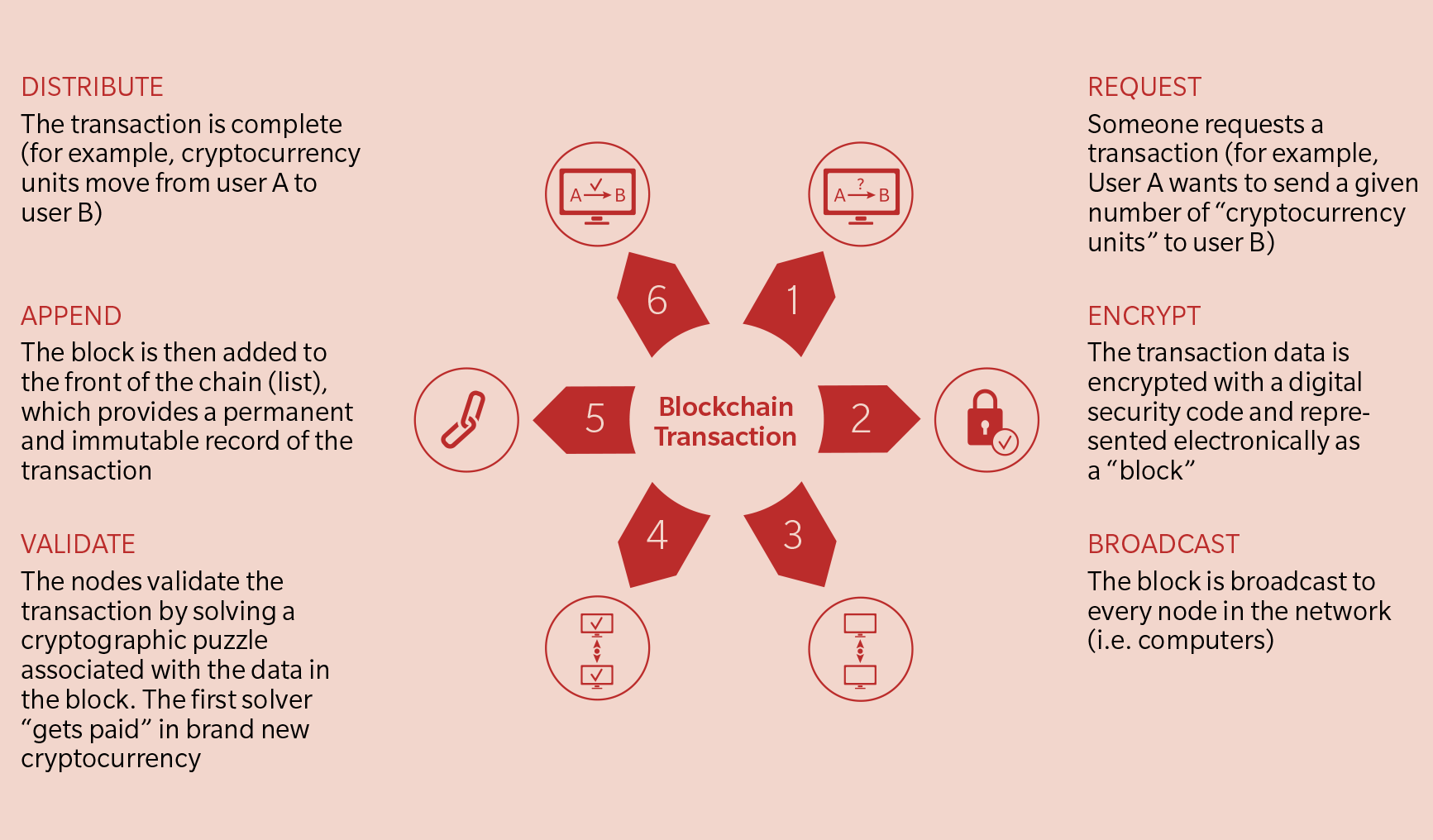 Q: How could cryptocurrencies and blockchain affect economic growth?

A: Advocates of cryptocurrencies point to their potential to improve payments and payment-like processes, enabling lower costs and increased speed, transparency, reliability, and immediacy in availability of funds. If transaction costs are lowered and cryptocurrency values stabilize, cryptocurrencies could help to expand payment services and promote financial inclusion among populations with limited access to formal banks.

Blockchain could facilitate record management for many other activities, such as voting, government services, identity management, energy distribution, agricultural trading, and even food traceability. New and unexpected applications are likely to appear in the coming years for both cryptocurrency and blockchain.

Q: What could be the impact on financial stability?

In theory, cryptocurrencies could also reduce systemic risks in the financial system, especially in the payments sector if they lowered credit risks by speeding up the settlement of transactions or reducing errors.

In the near term, countries with exchange and capital controls face the greatest risk. Market participants could circumvent these controls by using cryptocurrencies for capital transfers or foreign exchange transactions. This depends on whether a government effectively restricts buying or redeeming cryptocurrencies with their national currency.

Q: How could fiscal policy be affected by cryptocurrencies?

A: The benefits to central banks and governments of printing money would be at least partially at risk if cryptocurrencies become a substitute for national currency. In the more immediate term, cryptocurrencies could have an impact on tax receipts, as they may allow for easier tax evasion.

Tax authorities have recently sought insight into transaction volumes for Bitcoin and other cryptocurrencies, but it is difficult to comprehensively ascertain ownership across the cryptocurrency market.

A: Cryptocurrencies have been rife with fraud, including investment schemes “guaranteeing” high returns and pump-and-dump schemes. Few regulations are in place. An estimated $4 billion was raised in 2017 through initial coin offerings (ICOs), many of which were open to any investor. The light regulation was doubtless an incentive for most ICO issuers, but it’s not always clear even what current regulations apply to ICOs. Some ICOs have promised big returns in exchange for tokens that may result in total losses.

There is no consensus on the right approach. As policymakers and industry participants pursue answers to these questions about cryptocurrency, there’s likely to be a push for increased global coordination in policy, but it is still too early to bet on which direction they will follow.