By Juergen Reiner and Andreas Nienhaus
This article first appeared in the Forbes on May 17.

Will automakers or technology companies put consumers behind the wheel of autonomous automobiles? Certainly, the car manufacturers have the edge on the hardware, but a small tug of war is brewing when it comes to the intellectual property that will ultimately make connected and self-driving cars a reality on the road.

Companies like Google, Facebook, and Apple are pouring enormous resources into a vision of mobility that focuses on the driver experience — so much so that they have the potential to take away some of the limelight — and profits — from the automakers many presumed would dominate car connectivity and driverless technology.

As personal computer manufacturers learned in the 1990s, controlling the hardware alone doesn’t ensure profitability. What makes Apple so smart — and still able to charge over $1,000 for a laptop — has been its focus on the intellectual property. The bottom line for automakers: Keep pushing forward with research and development, and find the right technology companies with which to partner.

The biggest tech contender in the mobility space is probably Google, which has been patenting intellectual property as fast as the leading car companies and once even considered building its own fleet. In 2016, Google parent Alphabet Inc. created Waymo, a company dedicated to commercializing Google’s self-driving car technology, and began a hunt for partners. [Recently, the Alphabet division  entered a joint venture with car-sharing company Lyft.]

Between 2012 and 2016, there were slightly more than 5,000 mobility patents filed by 12 leading automakers and global tech companies, according to research conducted by Oliver Wyman and World Intellectual Property Organization (WIPO). Of these, almost 3,800 were filed by six car companies — Audi, Daimler, General Motors, Volkswagen, BMW, and Tesla — that related to green car technology, including electric cars, batteries, fuel cells, and alternative fuel. In this category, the tech companies filed just seven patents.

A very different story emerges, however, in an analysis of patents involving connected and self-driving cars. Here, where technology tends to touch the driver more directly than in the green car area, there were almost 1,200 patents, close to one-third of which were filed by tech companies, led by Google. In fact, in the connected car and self-driving category, Google filed almost as many as the leader in the category Audi—221 versus 223—and more than BMW (198) and Daimler (159) individually, and more than GM (141) and VW (75) combined. The other five in the non-auto group were Apple, Facebook, Microsoft, Amazon, and Uber. 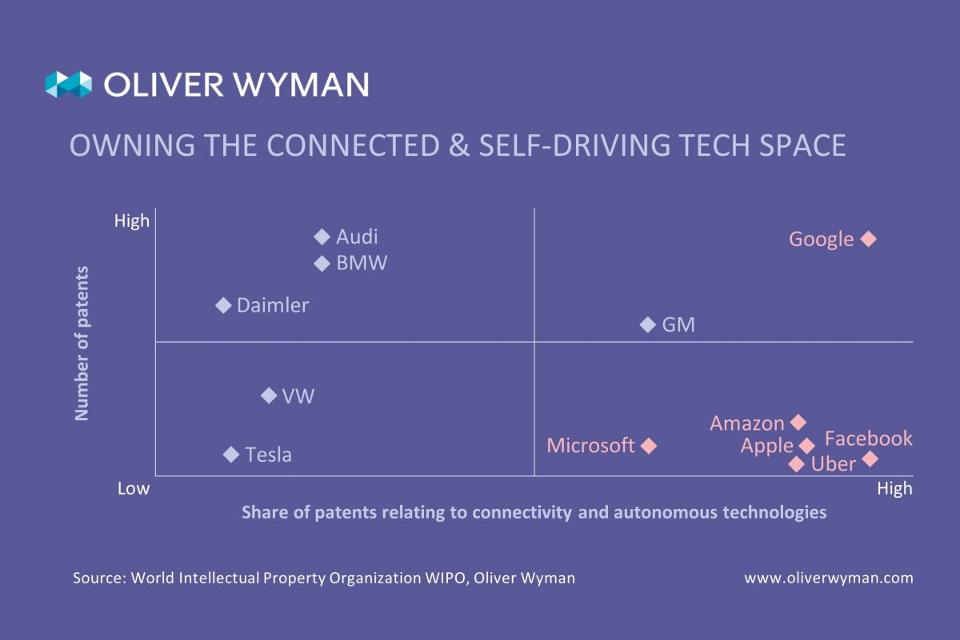 In the area of mobility services, which includes car-sharing and navigation technologies and app development, the tech companies actually filed more patents than the automakers — 55 versus 44. And, while one might expect Uber to be among the leaders here, it was dead last with only 2 patents. Google once again dominated with 30 patents, trailed by Apple (14).

The auto companies’ preoccupation with green vehicles makes sense, given the anticipated increase in the regulation of emissions and the pressure to move to a low-carbon or no-carbon economy, particularly in Europe and China. Five of the manufacturers had the vast majority of their mobility-related patent work in the area of green vehicles. The only car maker that didn’t have the majority of its patents in this category was the one fossil fuel-based US manufacturer, GM; 65 percent of GM’s patents were in the connected car and self-driving category.

This analysis leads to two overarching conclusions. First, the research and development activities of digital players like Google show how serious they are about becoming part of the mobility ecosystem. Where the number of mobility patents increased over the five years for tech players by 50 percent, the number actually decreased for the six automakers. The research and development budget rose 20 percent for the tech players and 5 percent for the car companies.

Securing customer access through partnerships and by integrating mobility service providers into their own platforms will help automakers to compete better with current and future digital disrupters in their ecosystem.

Looking to engage the customer

Second, by targeting only service-oriented and software-based mobility segments, the digital players picked areas with high levels of customer interaction and engagement. This allows them to pursue a strategy of establishing a new customer interface through mobility services with drivers, opening up the possibility in the future for the software and connectivity capabilities to become the point of differentiation rather than the hardware.

For auto manufacturers, this should be a wake-up call to develop a more focused mobility strategy. Rather than try to compete head-to-head with players like Google in software-driven mobility segments, car makers may need to limit investment to mobility services where they can dominate and partner with tech companies where they cannot. Recently, car makers also have been teaming up with each other to push into areas like traffic monitoring and navigation services.

Securing customer access through partnerships and by integrating mobility service providers into their own platforms will help automakers to compete better with current and future digital disrupters in their ecosystem. Here, Tesla has an advantage, because its innovation model is based in part on an open-source system — a reason its patent numbers are low. That allows the electric car company to focus its research and development clearly. More than 70 percent of Tesla’s patent filings over the past five years have been concentrated in the area of developing batteries, charging, and electrification.

This is a turning point in automotive history. The automobile is undergoing a transformation, moving from a means of conveyance to becoming a data center on wheels. For car manufacturers to maintain their leverage in the direction the auto will go next, they have to build alliances and concentrate R&D resources today.