Our Expertise Insights Automotive Manager 2019 Coping With EV Adoption Uncertainty
Most automakers readily acknowledge that the next 10 years are likely to encompass more change than their industry has seen in the past 50. The sweeping acceleration of automotive and mobility trends that include electrification, autonomous driving, connectivity, and ride-hailing are at the forefront of the industry’s imminent transformation, but there is no telling where artificial intelligence and other new digital technologies will take us next, once all cars can be changed overnight with a download of software.

The immediate question that trips up car manufacturers is how long the transition to a future of fully connected electric and driverless cars will take. Indeed, it is in this no man’s land of risk and reward where car companies sometimes struggle to find the appropriate balance between commitment to the future and satisfying the demands of today’s customers. Here, success will go to players who understand the need to incorporate agile manufacturing and design as they create a new market in electric vehicles (EVs) while remaining competitive in their core.

While no one knows for sure when consumers will warm to electric cars, there is no doubt enthusiasm for the new propulsion system is growing. Globally, there were more than five million of them on the road at the beginning of this year, up almost 67 percent from the year before when the EV count crossed the three-million mark.

Just look at the expansion of models available in plug-in EVs. Where there were only two models available in 1997, there were 98 entering 2019. In 2018, global plug-in deliveries were close to 2.1 million, a majority of which were battery electric vehicles – an increase of 64 percent over the preceding year. (See Exhibit 1.)

More than half of those sales were made in China, where a solid commitment has been made to investment in EV startups and encouraging EV ownership through extensive subsidies. Substantial sums are also being invested in Chinese lithiumion battery production and research efforts to improve battery technology. China is currently the biggest producer globally of the batteries used in electric vehicles.

China is expected to become a key player as the new electric vehicle market evolves. It is also the largest producer of EVs in the world, with a reported capacity of some 20 million vehicles. While its plethora of automakers have been focusing on the domestic market to date, the biggest players are talking about going global in the next couple of years. 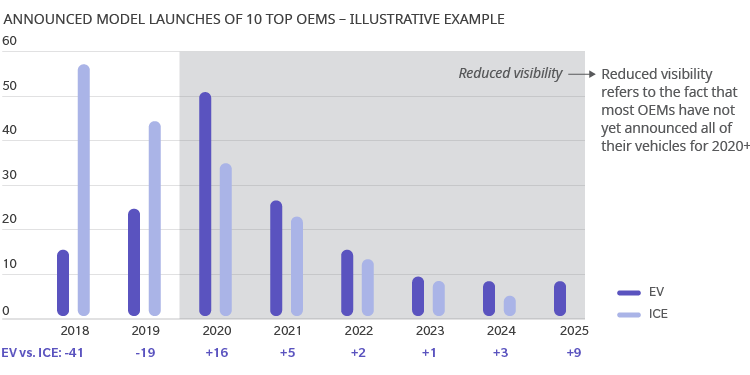 THE UNITED STATES: A COMPLEX MARKET

Probably the most ambiguous market is North America. Despite its love affair with the SUV and pickup truck, the United States has been one of the fastest-growing markets for EVs. US sales grew by 79 percent last year. Yet, government policy has not been supportive of EV market growth, and cheap gasoline prices may hinder market development.

The automotive sales market is likely to get increasingly regional, facing different regulatory crosswinds that will make it difficult for manufacturers to deliver the right mix of vehicles in the right places at the right time. In this environment, car companies will need to be on top of market trends and proactively analyze consumer preferences like they never have before. To stay ahead of the competition and market trends, product development teams also must move faster and be more agile. And manufacturers will have to aggressively work to keep their workforce skill sets up to date with the changing mix of models.

Still, sales do not equate to market penetration, which remains in the low single digits worldwide. As quickly as the market may feel like it is shifting, it is arguably some years away from a real tipping point toward electric. In fact, it is likely that the industry will continue producing internal combustion cars in relatively large quantities through 2030.

AUTOMAKERS NEED TO PROACTIVELY ANALYZE CONSUMER PREFERENCES LIKE NEVER BEFORE

NO CHOICE BUT TO MOVE

The problem for car companies: They cannot afford to wait for a clear signal from the market to make an investment in electric vehicles. Anticipating an acceleration in sales in the near future, car manufacturers are investing more than $300 billion over the next five to 10 years in EV technology, while still maintaining their current gasoline-powered portfolio.

In this balancing act, aligning production with anticipated demand represents one of the biggest challenges for the industry. While a few automakers have designated EV plants, most electric cars are currently built alongside internal combustion vehicles. This means car makers need to be able to switch assembly lines efficiently from production of traditional light trucks to electric vehicles and back again, the way they used to alternate between producing SUVs and smaller sedans, depending on sales.

Complicating the situation further is the fact that the value proposition for car companies is lower with EVs than with traditional vehicles, given that the most expensive component is a battery – which most car companies do not produce – rather than a powertrain.

THE IMPACT OF CHEAP GAS

Customers also are not ready to switch to EVs when gasoline is so relatively cheap. Since the 2016 plunge in oil prices pushed down the cost of driving bigger vehicles, car buyers – particularly in the United States – have been clamoring for SUVs and other light trucks. In 2018, a record 69 percent of the US market was light truck sales.

What would happen if oil spikes again to above $100 a barrel like it did in 2008 and again in 2011? External factors like rising oil prices or government regulation could push car buyers to turn in their SUVs for EVs rather than a smaller gasoline-powered sedan as they used to – a possibility for which the industry needs to prepare. In fact, the sales patterns for EVs show the first big bump up in demand happened in 2010, in the midst of very high oil and gasoline prices.

To simplify an otherwise muddled future, some automakers have abandoned small vehicle production or stopped making pure internal combustion vehicles. But ultimately, automakers will simply have to learn to live with a much more complicated portfolio and a much more challenging value proposition that include EVs, while they navigate a much less predictable marketplace – at least for the next five to 10 years. After that, things get really exciting as autonomous vehicles begin to enter the mix in earnest.