The surge in outbound Chinese travelers over the past decade has had an impact on a variety of industries around the world. The travelers have both benefited and challenged retailers, consumer goods brands, the travel sector, and hospitality services alike.

They have had an effect on outlet stores outside London, on German department stores, and on airport duty-free stores worldwide – as well as on every major hotel chain and airline.

Over the past year, Chinese travel has become increasingly social and digital, according to Oliver Wyman’s latest survey of the subject. Independent travelers, who are comfortable using digital tools in their daily lives, are going online to plan their trips and share their experiences.

Chinese outbound travel has gone through dramatic changes over the years we have been following and describing it, since our first survey released in 2016. Outbound travel used to be dominated by organized tour groups. But today many Chinese are “free and independent travelers.” Luxury purchases – including buying for others, either for resale or on someone else’s behalf – once drove world-leading per-pax spend. But this too has faded as a wider range of Chinese people travel abroad and as luxury products become less expensive and more available at home.

Chinese consumers have leapfrogged shopping formats that are mainstream elsewhere and taken up mobile e-commerce, mobile payments, and social shopping with gusto. So it should come as no surprise that Chinese travelers are also highly social and digital. Our report, based on a recent survey of 2,000 outbound Chinese travelers, demonstrates this shift and shows its implications for business.

The number of outbound trips by Chinese travelers in 2018 reached 140 million, according to the China Tourism Academy – a 13.5 percent increase over 2017. That rise – slower than in previous years – was driven in roughly equal parts by the greater number of Chinese able to travel and by individual travelers’ increasing number of trips, our research suggests. The average traveler in our survey reported taking 2.1 outbound trips per year, an annualized increase of 6 percent. Meanwhile, the share of outbound Chinese from Tier 1 cities reached its lowest level since we began tracking it, reflecting a wider base of travelers.

Travelers’ destinations and purposes are also changing. While destinations such as Hong Kong remain common, the trend in recent years has been towards more‑distant overseas trips. Chinese travelers are increasingly comfortable traveling farther afield: When they were asked where they planned to visit in the next 12 months, Iceland broke into the top 15 destinations of interest. As travel becomes more frequent, trips are shortening, with the average duration falling by more than one day.

There was a strong increase this year in the share of people traveling with their spouses, extended family, and – in particular – friends. As a result, the average group size rose about 10 percent over the previous year. This was reflected in the way trips were planned as well. Up until now, the clear trend has been from professional-planning to self-planning. In 2018, however, more than one-third of respondents reported jointly planning a trip with their companions. That implies that the growing social aspect of Chinese travel begins before departure, during the planning stages (Exhibit 1).

When Chinese people travel with friends and family, they primarily seek memories: Sightseeing and recreation-and-entertainment were the most frequently cited reasons for a trip (Exhibit 2). According to 53 percent of our sample, “the most important part of a good holiday is to enable me to experience luxury that I can’t have back home”. 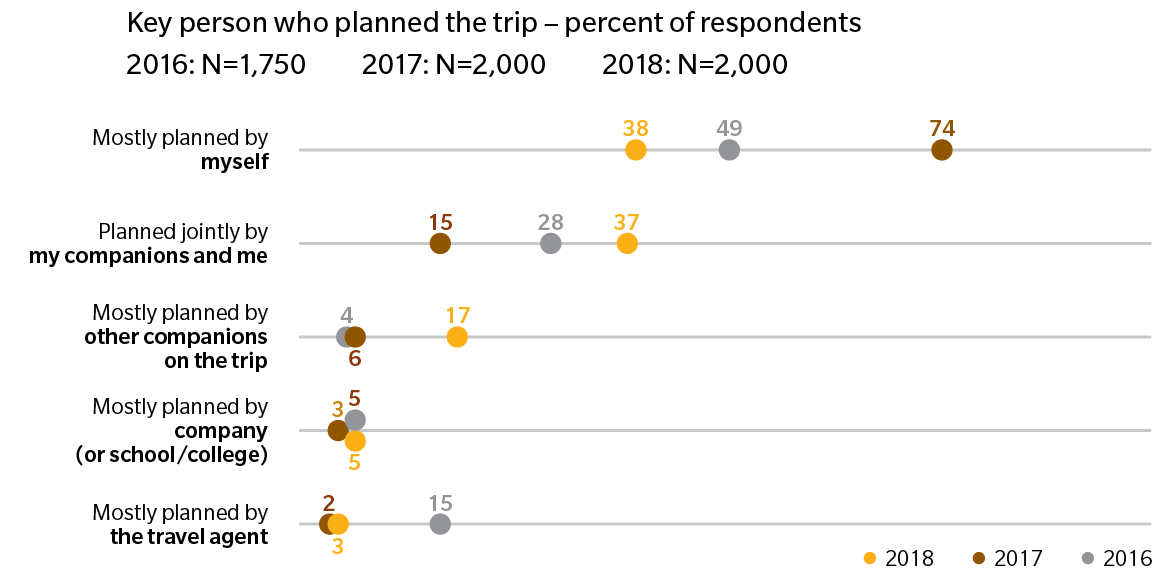 Question: Who planned the itinerary? 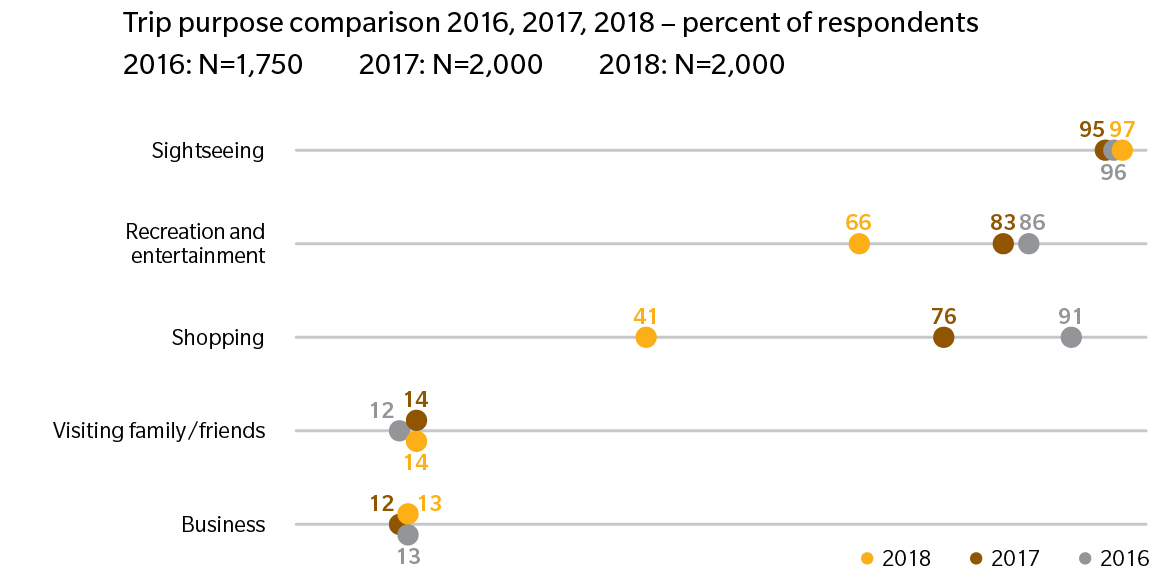 Question: What was the primary purpose of your last trip (rank up to three)? – Top three purposes 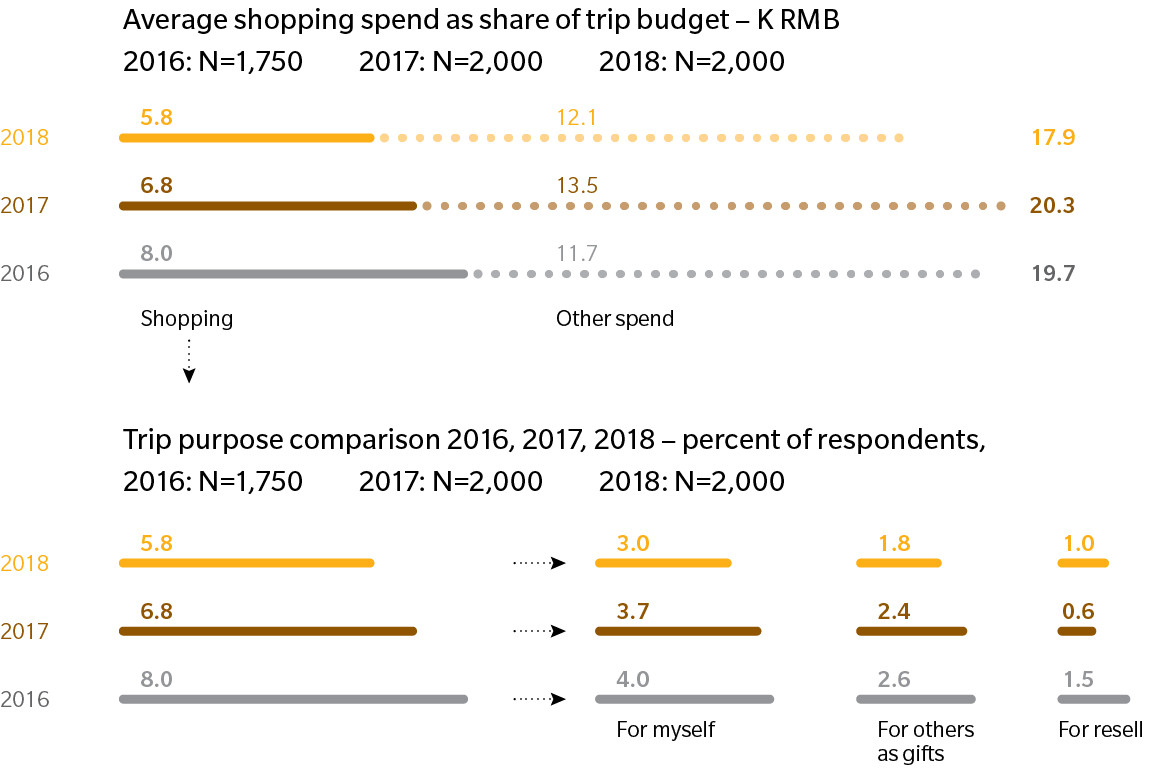 Question: How much did you spend on this trip to (Generated Location) in each of the following categories?

Chinese travelers were once known to “mai, mai, mai” (“buy, buy, buy”) while abroad, but the once-central role of shopping in Chinese travel has been fading. For the first time in our survey, fewer than half the respondents cited shopping in their top three reasons for traveling overseas, and only 7 percent cited it as number one. For the second year running, Chinese travelers reported spending less on shopping year on year. The share of a trip’s budget devoted to shopping fell below one-third, with decreases in the amounts spent on shopping for resale, for other people, and for the travelers themselves (Exhibit 3). For some destinations, however – including Italy, Macau, and Korea – shopping still plays a large role.

The shopping that does take place while traveling is increasingly concentrated in duty-free and tax-refunded channels: Our sample reported spending more than 50 percent of their shopping budgets in these. Local brands and products are increasingly a focus of shopping while abroad, with one-third of respondents saying they choose to shop where they can find many local brands and products, a significant increase over the previous year. Social factors are key to deciding what people buy and where. As Exhibit 4 shows, recommendations from friends and family, review-driven Chinese e-commerce platforms, and social-shopping apps were the three most-cited sources of information for shopping while abroad. 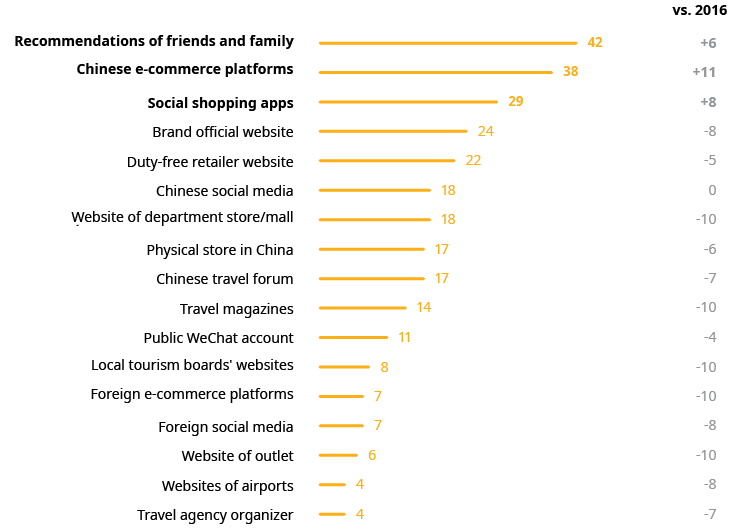 A TASTE FOR TRAVEL

If shopping no longer drives Chinese tourism, what does? The answer is social experiences. Sightseeing and recreation are the most-cited reasons for travel (Exhibit 5). A key need for Chinese travelers while abroad is to create “shareable” memories – for example, photos of an authentic local meal or of the traveler and their companions in front of a well-known tourist destination. 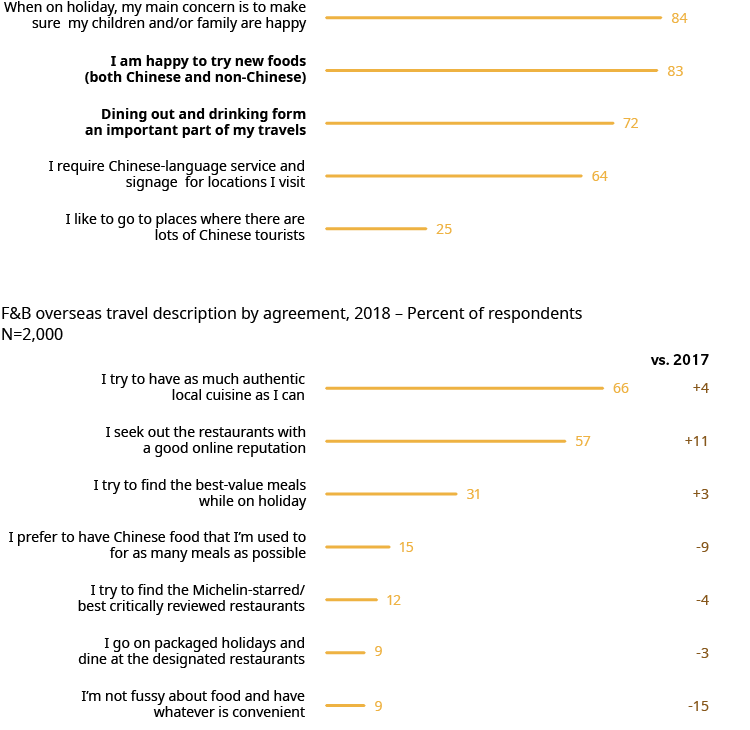 Food plays a central role in Chinese culture, so it is not surprising that it plays an important role in travel as well. About 70 percent of our sample agreed that “dining out and drinking form an important part of my travels.” What has changed, however, is the level of openness to local food: In 2018, 83 percent reported being willing to try new types of food, including non-Chinese. Travelers in our sample were far more likely to seek out authentic local cuisine than to stick with familiar Chinese eateries. The share saying they try to eat like the locals as much as possible exceeded the share preferring Chinese food, and that gap increased a net 20 points over 2017. Consistent with the trend toward digitally enabled “social” travel, online restaurant reviews were a key source of information for choosing where to eat, cited by 57 percent of travelers in 2018, up from 46 percent in 2017.

Just as China has different services from the rest of the world for e-commerce, social media, and search, it also has its own online travel agents and aggregators. These are dominated by local players Ctrip, Fliggy, and Qunar.

Two-thirds of respondents said they used Ctrip to book flights and hotels, with Alibaba’s rebranded Fliggy platform taking the number-two slot. Direct bookings on official airline websites increased, as they improved their Chinese versions and Chinese consumers became more familiar with them.

Price, while still the number-one factor for choosing a booking platform, lost ground to other factors, including the provision of travel information and guides – which rose 32 percentage points – and the convenience of a one-stop service.

Airlines should note that Chinese travelers choose an airline primarily on price, the convenience of flight schedules, and its on-time record. While around 60 percent of travelers are aware of loyalty and mileage programs, these were the least-cited reason for choosing an airline, and their utilization is low. Travelers were five times as likely to say they used the programs but didn’t choose their airline based on them than to say they chose an airline because of its loyalty program.

Loyalty programs are similarly unimportant for hotel accommodation; they were the factor least cited as a reason for a particular choice. Chinese travelers book based upon location, reputation for cleanliness garnered from online reviews, and value for money. Chinese travelers take particular note of the hotel Wi-Fi and amenities offered – things like shampoo and soap: 40 percent said these have a strong impact on their impression of a hotel.

HOW TO REACH CHINESE TRAVELERS

Marketing to Chinese travelers requires a specific, localized approach, given that they are digitally savvy, make frequent use of social media, and listen to others’ opinions. As Chinese travelers rely heavily on word of mouth and online reviews, it’s important for businesses to be present on the right platforms, to monitor and manage their profiles, to head off early issues that could generate negative word of mouth, and to create ample opportunities to generate positive word of mouth.

Sites like Mafengwo are key sources of advice for travelers, especially for dining and shopping. Online travel agents are widely used to book hotels and flights. For generating positive word of mouth, nothing beats WeChat, the dominant Chinese social media and messaging platform, which has plenty of opportunities for sharing. English has already adopted the word “Instagrammable”; businesses targeting Chinese travelers should learn the Mandarin equivalent, “晒” (shai).

The opportunity presented by outbound Chinese travelers has rightly attracted the attention of a wide variety of businesses. These range from department stores to outlets, from the luxury houses of New York and Paris to Scotland’s distilleries – and they of course also include airlines and hotel chains. Making the most of this opportunity requires up-to-date insights into and understanding of Chinese travelers and their motivations, as well as a concerted strategy that leverages local platforms and digital media. Does your organization have in place what it needs to attract today’s Chinese travelers? And tomorrow’s?