This article first appeared in BRINK.

We are at the brink of fundamental technological breakthroughs that have been predicted for decades. The most striking innovations—such as autonomous driving, fully automated manufacturing, and home care delivered by robots—combine robotics, artificial intelligence, and machine learning. These technologies are not separable anymore, but integrated. AI, for example, has a role as a standalone technology, but it is more often just a piece of a more complex digital strategy.

Significant changes in design and implementation will be needed if technology is to realize its full potential. My recent research, in collaboration with Oliver Wyman and Mercer, has identified how to better manage the digital-transformation process. In the past, a sequential approach has dominated: Vendors develop products, sell them to CTOs or CIOs through what are often prolonged negotiations (neither side fully understanding the other), and then managers struggle to integrate the new technology with their workforce to achieve business objectives.

Now, we propose a new integrated model that links the design of a digital strategy with the design of new workforce practices right from the beginning. We feel this new model gives companies a better shot at successful transformation and improving productivity.

In the new integrative model, collaborative design—engaging vendors, workers, and managers—merges technical and business knowledge and applies it directly to business operations. Design considerations include how technology can augment human inputs or fully replace it to allow for higher-order human inputs.

Where Does AI Work?

Consider the use cases in which artificial intelligence can substitute for human decisions. AI serves as a successful substitute in domains with frequent, structured, and specific tasks. Because using AI requires training, it works better in areas where there are a greater number of events or data points. Events with more structure and specificity also provide for an easier learning process.

Within the realm of insurance, for example, AI is suitable for evaluating health claims in countries with standard codes, because those claims are both frequent and structured. Conversely, AI is less suitable for making decisions on claims for serious bodily injuries, which require more human judgment. In these situations, however, AI might help provide data and information to support human judgment and thereby augment work.

In banking operations, there are a number of repetitive tasks involving data entry and re-entry, particularly for compliance, reconciliation, and accounting purposes. Robotic process automation (RPA), a form of AI, uses software bots for repetitive, rote tasks. The bots function like humans, as virtual users interacting with screens and applications. They primarily perform repetitive, manual, and simple cognitive tasks.

As data volumes increase, it can become prohibitively time-consuming for humans to process it. Thus, RPA is increasingly deployed to free up human capacity from standard tasks and processes and direct it toward more complex and analytical tasks. And, of course, humans can manage the technology to mitigate the risk of error and intervene in the event of an RPA system breakdown. 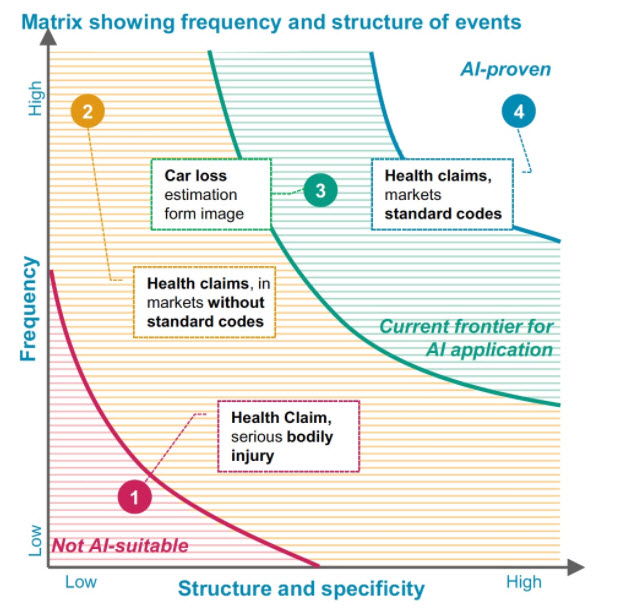 As vendors and internal IT developers recognize the importance of using collaborative design to create complementary technologies, they will produce more targeted, useful solutions. Consider the use of AI as a piece of a more integrated process with machine learning and robotics. Too often, firms have sought to automate their way out of productivity and labor problems. In the 1980s, for example, General Motors spent more than $50 billion on robotics in an effort to catch up with more efficient Japanese producers. At the end of the decade, GM remained the high-cost producer because it failed to upgrade its workforce and change its work practices in ways needed to make the new technologies pay off. Toyota, by contrast, achieved world-class levels of productivity by taking an integrated approach—introducing new technologies gradually, while simultaneously investing in team-based work systems and high levels of workforce training.

Ironically, in the same plant in Fremont, California, where Toyota achieved high levels of productivity, Tesla is now following a total automation strategy but failing to meet its production goals, falling prey to the same mistake GM made 30-plus years ago. Not surprisingly, workers at the Tesla factory are trying to organize a union in protest of what they see as persistent safety problems, overwork, and low wages. Investors are worried the company’s cash reserves are running low.

Conversely, when technology developers and designers proactively consider and engage the workforce as part of a collaborative-design process, the resultant solution is more likely to fit the needs of the business and the specifications of the user.

Cisco, for example, applied the principles of user-led design in a 24-hour “breakathon” intended to break down and rebuild its HR program. Over 800 employees, 65 percent from HR and the rest from services and engineering, took part in the event, with offices around the globe participating in a “follow-the-sun” manner. Taking inspiration from hackathons, employees split up into small teams to identify problems they had experienced while doing their job and pitch ideas for solutions.

The hackathon resulted in several solutions across talent acquisition, onboarding, development, and leadership. One such idea resulted in the creation of YouBelong@Cisco, a mobile app that guides new employees and their managers during their initial weeks of work.

Unilever also applied the technology-integration mindset to its recruiting and onboarding process. Unilever posts targeted job advertisements on social-media sites. Potential applicants who click the job description are brought to a site where they can apply for the job with information sourced from their LinkedIn profile. From there, skill assessment is conducted through a series of online games. Applicants who pass that stage submit prerecorded video interviews through a website or app. At each phase, AI algorithms screen the applicants and narrow down the pool of potential hires who qualify for an in-person interview. Once hired, candidates can sign their offers digitally, access Unilever’s onboarding system, and connect digitally with other recent hires.

From start to finish, Unilever uses digital tools and advanced analytics for recruitment and onboarding. Unilever’s digital approach has streamlined the recruiting process from four months to two weeks and reduced recruiter screening time by 75 percent. Candidates benefit from a quicker process and also less human bias, as AI has proven to be more objective.

The guiding principle is not to throw technology at a problem. That’s highly likely to create even larger, unforeseen problems. The guiding principle should be to look for elegant solutions to problems and ask how technology can help workers achieve the end goal faster and cheaper. It’s a mistake to perceive technology as unmalleable. It is malleable, and, when shaped collaboratively to augment human inputs, it is much more effective—as are the humans who are relieved of tedious, repetitive work.

General-purpose vendors often lack knowledge of industry-specific work processes. This gap in understanding can create resistance and bottlenecks when developing technology solutions. The solution lies in partnerships: between technology vendors and business managers, between humans and machines, and between developers and the frontline workers, who will be the ultimate end users.