Our Expertise Insights Amazon's Move Into Delivery Logistics
Many industry players and experts are waiting anxiously to see what innovations Amazon will come up with next – and above all, whether Amazon will enter into delivery logistics under its own banner.

Like no other retailer in the e-commerce space, Amazon has driven innovation at all customer touch points as a means of continuous competitive differentiation – from introducing its Prime service to enabling same-day at scale and pushing for Sunday deliveries. Amazon knew that differentiation that included the use of postal services would not hold for long, and so has invested heavily into regional warehouses, a powerful IT backbone, and detailed analytics. In particular, there is no data point that Amazon does not analyze frequently and in detail to better understand customer behavior and thereby quickly adapt – whether this involves changing webpage design or new functionality in delivery and return choices. And now, there are clear signs that this data is prompting Amazon to shift its attention to the end delivery process.

Based on an Oliver Wyman analysis of Amazon’s latest strategic moves, it appears that the e-commerce giant is quietly developing a decent footprint in and knowledge of delivery logistics.

In detail, Amazon has already acquired or partly controls delivery logistics players in several European countries: In the UK, for example, Amazon has acquired a minor stake in Yodel, which, with 145 million shipments per year and more than 5,000 delivery trucks, is a large player in that market. Amazon’s recent move to introduce the Pass My Parcel service in collaboration with Connect Group at more than 500 news agents and convenience stores has set new standards for same-day delivery in the UK. In France, thanks to a 25 percent stake in Colis Privé, Amazon has gained significant control over a player with more than 25 million shipments per year and 1,700 delivery trucks. 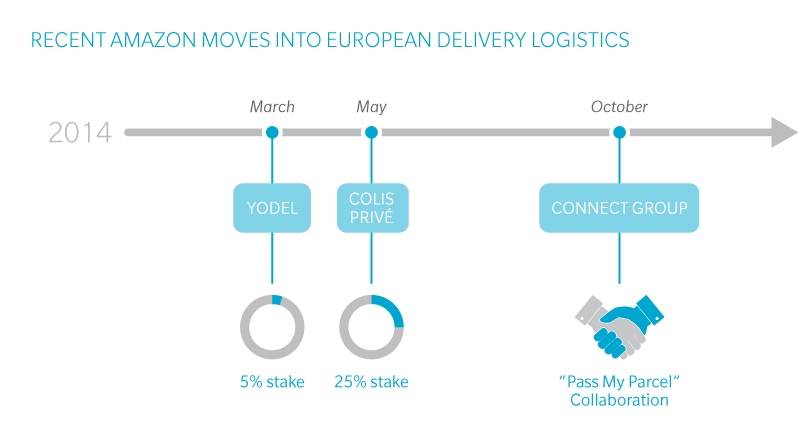