By John-Paul Pape and Keith McCambridge
This article was first published in the World Economic Forum Agenda on August 13, 2020.

When firms moved to remote working in response to the COVID-19 lockdown, many discovered an unexpected upside of increased productivity. Tasks that traditionally took six months were accomplished in two weeks. Problems regarded as unsolvable were being solved, often in very short time frames. In some cases, the pace of delivery has been phenomenal – such is the power of a crisis and the necessity it creates.

As we emerge from the lockdown, most companies are looking at how they can restructure and emerge stronger for the next decade. In addition to considering issues such as the ideal business model and operational resilience, companies are focusing on how to sustain some portion of this increased productivity and transformative power into the future. Many are noticing that in spite of slashing bureaucracy, they can only get so far, and that continuing to work longer hours is unsustainable. Numerous work tasks have also been left aside, such as regulatory tasks that also now need to be addressed.

In our work with dozens of organizations on their rethink plans, we’re finding the firms that focus on a combination of four conditions – restructuring the work people do, empowering leadership, shifting beliefs and behaviours, and building resilience – are the ones that are continuing to succeed at unlocking productivity. Below, we examine how leaders should approach each of these factors in turn.

From cutting costs to reworking customer offerings, being thrown into the COVID-19 crisis forced us to ask which work was deemed as most value-adding to customers and critical for survival – what is the “new minimum”. As a result, leaders and their teams figured out what work to do, how to do it and convinced themselves of the need to do it now, not tomorrow.

Adopting these lessons moving forward, work should be broken down into three categories: essential, necessary and wasted, classified according to the impact on delivering the strategic value of the organization. Time spent on each type of work needs to be codified with lessons learned through the crisis. For example: management information truly critical in terms of adding strategic clarity needs to be identified, while the traditional reams of reports that never get read by senior decision-makers should be eliminated.

Leaders should create clarity on the “must-have” outcomes they need to deliver value and regularly communicate them. Messaging must create a compelling “why” this outcome is essential – what pain it will remove, what value it will create.

In most organizations we work with, workforces on average invest less than 30 percent of their time in the work that delivers the strategic value uplift desired.

Then the amount of time people actually spend on tasks that deliver strategic value should be measured and analyzed. In most organizations we work with, workforces on average invest less than 30 percent of their time in the work that delivers the strategic value uplift desired.

Once these initial results are measured, actions on critical work must then be taken immediately and adjustments made quickly if tasks are not significantly improving the value created. After the work that needs to be done is catalogued, and more of people’s time is refocused on it, associated structural and process changes can help reinforce and support sustainable higher productivity shifts.

Productivity also rose during the lockdown in part because the relationship between many employees and leaders shifted. In order for a higher level of productivity to continue, leaders have to evaluate how their leadership style was different and ask what it was about this mindset that allowed employees to flourish.

One of the biggest changes in the wake of COVID-19 was that many employees felt safer to make bold decisions. Pre-crisis, people felt it necessary to gain permission before taking action. During COVID-19, the bandwidth of leaders became stretched, leaving many leaders only enough time to communicate desired outcomes and timeframes, but not to address how to achieve these outcomes. Consequently, people had to figure out the “how” and, as a result, felt they had more autonomy to act. For example, employees on the front lines were empowered to work out how best to maintain customer satisfaction while having less physical connection with the customer.

Moving out of lockdown, firms should avoid simply reverting to the old command-and-control style of management. Instead, leadership will have to focus on clearly communicating desired outcomes and intent – rather than on telling their teams how to generate the outcome – empowering them to make decisions. It also creates a safer, more collaborative environment with a better sense of ownership. People own what they create.

Firms also need to take time to identify and support those leaders who emerged during the crisis. Through circumstance, this blossoming talent has found the freedom to act and has proved very capable of independent thought and performance. Give them as much space as possible, make your intent clear, and watch them deliver.

3. The shift in beliefs

As life returns to normal, leaders must understand how the beliefs of their most productive people changed during the crisis and which beliefs are most compelling for the company moving forward. They must work out how to replace the crisis with an inspiring purpose if they are to nurture and sustain the urgency created during the last few months. To do that, people’s beliefs during the crisis, their ways of knowing if they are acting consistently with what they or others value, must be understood.

For example, before the crisis, “consultation” was a key belief in generating a correct and therefore valued outcome in many firms. That created multiple conversations and, ultimately, delay. During the crisis, taking action quickly on a “good enough” basis became more highly valued. Beliefs changed to support those more highly valued outcomes. Rapid action became the key belief.

There is increasing evidence that some of the productivity surges found in the early weeks of the pandemic are now waning. The urgency that powered individuals, teams and organizations has started to dissipate. We are left with tired teams, the dawning realization that this new environment is not going away any time soon, and that the working world has changed.

This is testing the resilience of the workforce and has serious consequences for well-being and mental health. Many organizations are locked into a set of routines and operating practices that many assumed were temporary. As such, individuals are struggling to find a sustainable cadence, and this may well account for this drop-off in productivity.

The good news is that resilience, defined by an individual’s ability to bounce back after absorbing energy and pressure, is a skill, not a trait. It can be developed and strengthened through developing basic techniques of self-awareness and self-management, and as organizations find their footing, it’s vital to invest here at an individual, team and organizational level. 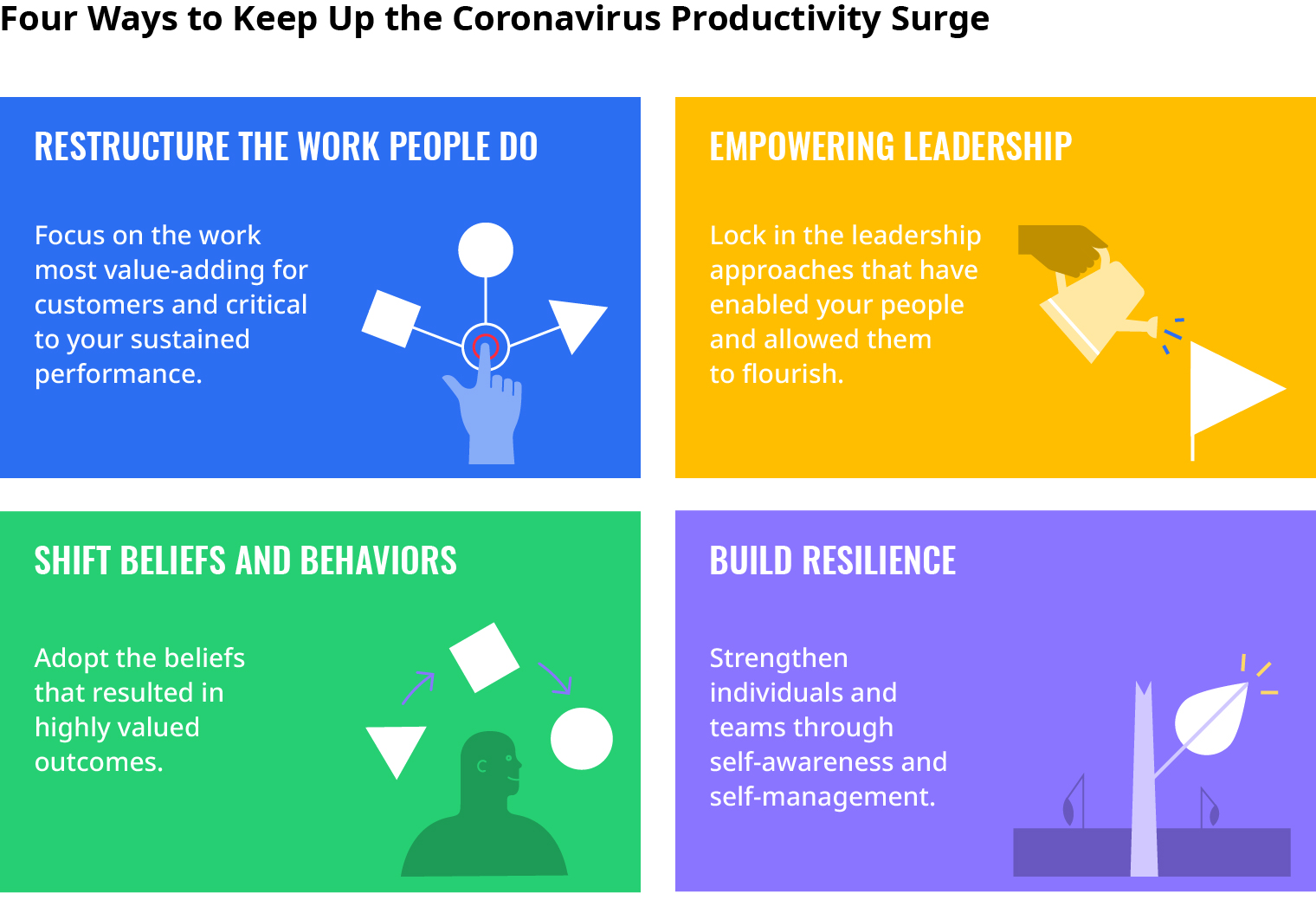 From slower growth to declining profits, the next 12 to 24 months will be enormously challenging. Our comfort with focusing on the tangible aspects of work – the tasks, the supporting structures and processes – typically means that they take up most of our efforts when trying to change them.

However, focusing on the time spent on value-creating tasks and the approach to performance will yield greater productivity gains. Perhaps because they are more intangible, learning new leadership skills and shifting mindsets are typically allocated much less focus, even though the productivity rewards are just as great.

Only a desire to radically address in equal measure, the work itself, our ways of working and our mindsets – and to do so in ways not countenanced before the crisis – will ensure that increased productivity can be maintained in the future.

Once COVID-19 abates and the world opens its arms to social interaction once more, we must leave the superfluous out of how we re-engage with work and accept new ways of driving productivity that allow us to excel as individuals, as teams, and as competitive organizations.