Brexit provides an opportunity for investors in schools on the European continent, argue Chip Greene and Nicholas Tonkes of Oliver Wyman’s education practice

Most public commentary on Brexit has focused on the risks for businesses. However for independent schools, it may provide an opportunity. Brexit is likely to result in a wave of financial services professionals moving from London to cities within the EU, many taking their families with them.

Doing the maths
A hard Brexit, whereby UK-licensed firms lose preferential access to the EU single market, is expected to result in 31,000 to 35,000 financial services jobs relocating in the medium term. In the long term, the number could be much higher if there is a shift in the financial services ecosystem towards the EU.

Uncertainty about the outcome of Brexit negotiations means the number of job relocations cannot be known. However it is clear that should incumbents in these roles follow them to the EU, a significant opportunity for companies catering to their needs will arise.

The UK government does not report statistics specific to bankers’ socio-economic demographic, however by assuming the UK average of 1.7 children per family, as many as 53,000–60,000 children will need schooling. While not all UK bankers currently have children enrolled in UK independent schools, most of those relocated are very likely to seek places for any school-age children in bilingual or English-language schools. It is expected that schools with a British or an American curriculum will be sought out to ensure their children are well-positioned to attend UK and US universities after graduating, or for re-entry to  their home schooling system if returning beforehand.

The economics of supply and demand
The following analysis indicates anticipated additional demand for independent schooling in excess of supply in Frankfurt and Dublin. However, financial services firms plan to move certain operations which could involve relocating London staff, hiring locally or eliminating some roles. The latter two options would impact the figures cited below:

Frankfurt is likely to receive the largest number of London-based bankers. Goldman Sachs, Deutsche Bank, UBS, Citigroup, Morgan Stanley and Nomura have announced plans under consideration to relocate some of their operations, amounting to slightly over 7,000 jobs so far. This could create demand for 12,000 places, leading to a potential shortfall of approximately 10,500 places (after taking into consideration the potential for adding 1,500 places through expanding existing facilities).

Dublin
Dublin’s first international school is under development by Nord Anglia, providing 800 seats planned and scheduled to open in September 2018. However, demand could potentially exceed this level, as 150 job relocations are currently under consideration with more likely. For example, JP Morgan has purchased a building in Dublin with capacity for 1,000 employees. Insurers such as L&G and Aviva have also announced plans to expand headcount in the city.

Irish state schools may prove a good option for some as, with English being the language of instruction, there are not the difficulties to overcome as in other contexts.   Qualification for entry to UK university is more straightforward also. However, these schools require families to live in a circumscribed nearby area and nearby state schools may not be seen as equivalent to typical international schools. In some cases, state schools are also already at capacity, and require potential students to be added to a waitlist in the hope of being accepted.

Paris
Around a dozen international schools have extra capacity for approximately 1,000 more students and France has promised to build three more international schools by 2022. Another 3,000 seats could be created, though it will take time to find appropriate locations and gain the necessary approvals in central Paris.

Efforts are underway to lure as many as 20,000 jobs from the UK, according to Paris French financial lobby group Europlace. So far, banks are considering the relocation of 1,400 jobs, possibly requiring up to 2,400 school places. If the number rises significantly due to any core markets infrastructure moving to Paris (such as Euro clearing) then substantial additional demand for places could be expected.

Brussels
At present, the top three international schools in the Belgian capital have room for an additional 1,500 students. Lloyds Bank expects to move 100 jobs to the city and insurers and asset managers will probably also announce relocations. Based on existing plans for these types of firms, we expect far fewer jobs to move than for banks. Therefore, Brussels probably has sufficient capacity for the time being.

Making the gradeThese estimates are based on the numbers banks have announced so far, which is about half the expected total. Demand for international school places in any of these cities is likely to rise further if there are any large-scale relocations of roles associated with the financial services ecosystem and infrastructure. This would happen, for instance, if Euro clearing operations were moved out of London, as many anticipate.

Even with the final relocation totals still to be determined, it is clear that there will be substantial shortages of school places in some cities if a ‘hard Brexit’ comes to pass and relocations occur quickly. Presently, Frankfurt is facing the most pronounced potential shortfall in such a situation. However, any city that becomes home to Euro clearing or similar operations will also face a significant shortfall.

These conclusions are corroborated in a recent article in The Independent highlighting the difficulties British expat bankers are encountering when trying to find school places for their children in Frankfurt. Clearly, school capacity has already become an issue for bankers contemplating a move to Europe.

Brexit clearly offers an opportunity for savvy investors in UK independent schools. However, consideration should be given to which cities in which to invest, and where to locate to benefit from localised demand. Investors must also consider the competition – in terms of existing schools’ curricula, extra-curricular activities, and facilities. Assessing real estate requirements will be of key importance for driving utilisation and ultimately returns. 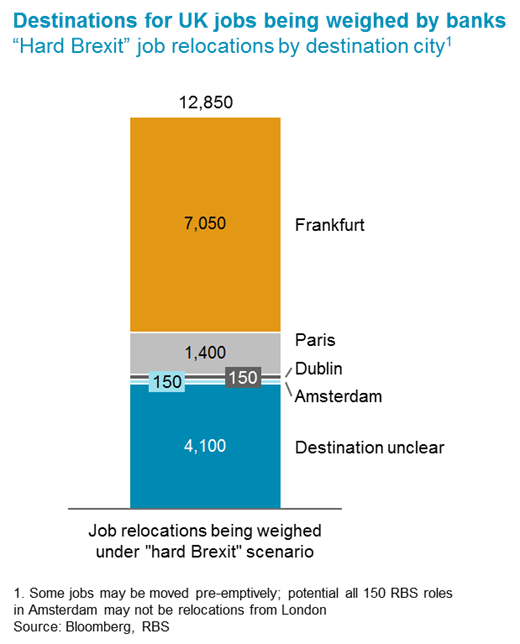