The Inevitability Of Artificial Intelligence

Why healthcare needs the new technology

Our Expertise Insights Health Innovation Journal The Inevitability Of Artificial Intelligence
In its hospital complex in New York City, leading cancer center Memorial Sloane Kettering is partnering with IBM to create the medicine of the future.

Watson mimics the human brain, digesting terabytes of data on certain cancers. Today, it is no smarter than the cumulative knowledge of the people who feed it information or the human-produced research it absorbs. But given the exponential growth in the amount of data on cancers coming available and the machine’s ability to “learn,” recognize patterns, and summon information instantaneously, it may be one day.

Watson also allows doctors to share their knowledge, meaning eventually every doctor around the world can be as smart as the most experienced doctors in treating a particular problem. That can be a significant benefit for people not living near top-tier healthcare facilities. As Larry Norton, deputy physician in chief for breast cancer programs at MSK, puts it, “I think this is beyond an evolutionary step. I think this is a revolutionary step. This has the potential of totally changing the way we conduct medicine.”

Artificial intelligence will soon power an entirely new generation of clinical tools and help physicians develop, down to a genome, personalized treatment plans.

And that’s the hope of artificial intelligence (AI) in healthcare. With its ability to sift, interpret, and order vast amounts of data, AI – with the help of advanced new algorithms – has the capability to streamline our $3 trillion healthcare industry, optimizing everything from medical coding to who (or what) reads our X-rays and MRI scans. It will soon power an entirely new generation of clinical tools and help physicians develop, down to a genome, personalized treatment plans. Someday, a person may be able to present Amazon Alexa with a problem, answer a few of “her” questions, and get personalized recommendations or a home-delivery drone-drop of a prescription.

Watson has provided concrete glimmers of the potential of AI and machine learning. But even today, consumers and healthcare providers are already benefiting from these tech innovations – thanks to less high-profile, workaday solutions being deployed daily in the world’s hospitals.

Today, most of the AI applications in healthcare are tactical – small in scale or focused on back office operations. These applications target obvious friction points of inefficiency or waste in the healthcare system and offer tangible solutions. Yet, even the smallest helps build the bridge to the solutions of tomorrow – the transformative AI that will eventually reinvent the clinical and delivery side of healthcare.

EXAMPLES FROM THE FIELD

Preventing healthcare-associated infections (HAIs). On any given day, one in 25 hospital patients is sick from an HAI, according to the Centers for Disease Control and Prevention (CDC). Catalyst.ai™, from Salt Lake City-based Health Catalyst, utilizes “smart” data mining and machine-learning algorithms to reduce patients’ risk of these deadly HAIs in the hospital setting. By analyzing where and when patients are most prone to infections, hospitals can take proactive steps to change practice patterns and work processes to reduce the risk. One health system utilizing catalyst.ai can now predict with 87 percent accuracy which patients with a central line are likely to develop a potentially fatal central-line infection, allowing them to address risk factors and initiate therapy early to improve clinical outcomes.

Getting people to take their meds. The annual cost of people not taking their medication or taking it incorrectly is estimated to be about $300 billion. AiCures is a New York-based start-up that uses AI and facial recognition software on mobile devices to ensure people take their medication the right way. A recent study found that AiCures helped boost medication adherence in people with schizophrenia to nearly 90 percent.

Reducing claims denials. As many as 40,000 healthcare claims are denied in the United States each year. Claim denials are a major source of lost revenue for healthcare providers and a substantial source of stress for patients who then must pay for the care out of pocket. Often, the outstanding bills don’t get paid at all, leading to mounting bad debt for hospitals. DenialsIQ™ from GE Healthcare is an advanced-analytics solution that uses machine learning to address the problem of medical-coding errors, one of the principal causes for claims being denied. DenialsIQ first flags insurance claims not coded properly, and then helps healthcare providers understand the mistakes they’re making and how to avoid the denials in the future.

No doubt, the AI revolution in healthcare is happening now. One need only look at the investment community’s growing interest in ventures connecting AI to healthcare as an indication of its perceived potential.

In July, an analysis by Silicon Valley Bank cited 44 venture-backed deals that raised $2.2 billion between 2015 and the first half of 2017 for startups developing diagnostic tools using AI or machine learning as part of their underlying technology. Large corporations, including Google, Amazon, Johnson & Johnson, General Electric, and Bristol-Meyers Squibb, are also dipping their toes into AI healthcare waters.

As the revolution is gaining momentum, it also faces a predictable resistance. Healthcare is a hyper-local industry that for the most part revolves around a key player – the physician and his or her judgment. It is not as if AI questions that judgment – after all, it’s physicians teaching the machines all they know. But doctors balk at consulting machines.

Criticisms of AI innovations like Watson say they only end up confirming diagnoses by human doctors. In part, that’s because these machines at this point tend to be used by the most advanced hospitals around the world with the most experienced doctors. So it’s not surprising that they may not learn that much new yet.

Watson’s limitations relate more to how AI and machine learning work. Their development is an iterative process, much the way our doctors are educated over multiple years at school and in residencies – except much faster and involving millions upon millions of data points.

When Watson is up to its potential, it will represent the cumulative knowledge of thousands of specialists. It will not provide diagnoses for only one type of cancer, but eventually all of them – and other diseases as well. While there are doctors that can easily match and even best AI innovations on some diagnoses, they cannot match the technology on all of them. Nor can some doctors even match Watson.

No doubt, AI and machine learning are coming to healthcare. But innovators still need to decide the most productive places to make investments.

The first criteria: Innovators need to look for major pain points for the healthcare industry, ones that represent substantial sums lost to waste and inefficiency annually. For example, in 2017, it was estimated that hospitals will lose $262 billion annually to insurance claims denials. That’s a pain point.

Second, AI and machine learning work best when there is too much data for humans to process, keep updated or analyze efficiently. The CDC estimates, for instance, that annually about 1.7 million patients contract a healthcare-associated infection during a hospital stay, from which 99,000 will die. AI allows for the collection of the data related to those infections and detects patterns, which then point to optimal strategies to reduce them.

Finally, AI and machine learning should be introduced into situations in which formulas exist for attacking problems. This allows the technology to use algorithms to transform the results of hundreds, even thousands, of successful and failed pilots into optimized solutions that will reduce, even eliminate, problems.

Artificial intelligence is the future for every industry, but nowhere is it needed more than in healthcare, which is already drowning under mountains of data and out-of-control costs. Like it or not, this revolution is coming, and healthcare needs to prepare for it – and more importantly, support its growth.

TOP CATEGORIES FOR INVESTMENT IN HEALTH INFORMATION TECHNOLOGY IN 2017 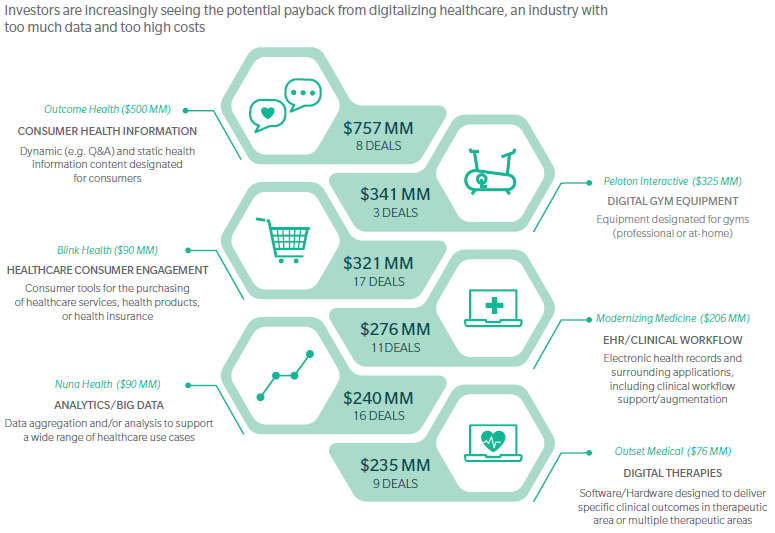 Sukanya Soderland is a partner in both Oliver Wyman's Life & Health Sciences practice and its Digital, Technology, and Ops and Analytics practice.

The Inevitability Of Artificial Intelligence