In just two years, a new model of healthcare captured 10 percent of the market, and the numbers continue to grow.

Our Expertise Insights 2012 November The ACO Surprise
The healthcare world has only gotten serious about accountable care organizations in the past two years, but it is already clear that they are well positioned to provide a serious competitive threat to traditional fee-for-service medicine.

In "The ACO Surprise", our analysis finds that 25 to 31 million Americans already receive their care through ACOs—and roughly 45 percent of the population live in regions served by at least one ACO. While relatively few organizations have achieved the full potential of the model, the top performers are already generating savings and delivering improved care.

Toward the Tipping Point

In our research on accountable care organizations we took the data down to the level of primary care service areas. (PCSAs are areas, typically larger than zip codes and smaller than counties, defined by where residents get their primary care.) Our reasoning: ACOs are intended to disrupt markets, so we needed to know which markets were ripest for disruption. Some of what we discovered was not surprising: The Boston and Los Angeles metropolitan areas have a high number of residents in PCSAs served by ACOs. There were also surprises: Texas is rich in ACOs. The map below spotlights the 19 states where more than half of the population live in a PCSA served by at least one ACO. 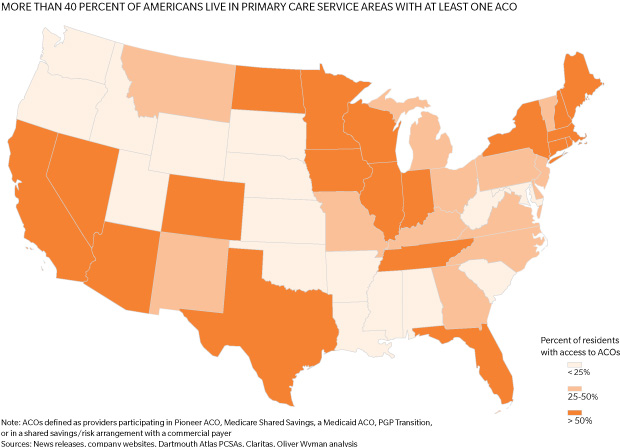