What a New Member Mix Means for Payers

A closer look at unemployment, member migration, and financial impact amidst an ever-changing pandemic.

Editor’s Note: The following article is part of an ongoing series offering our strategic advice and expertise on what healthcare industry stakeholders should do in response to the rapidly evolving novel coronavirus (COVID-19) pandemic. This is Part 3 of a three-part series. In "Is There a New Normal in Commercial Health Insurance?” (Part 1), we described the potential mix shift under various unemployment scenarios and modeled the various life flows and top-line revenue impact for payers. In “The Potential New Normal in Insurance Products” (Part 2), we examined product and distribution implications of our “new normal” in the US. In Part 3 below, we look more closely at mix shift modeling, including varying recovery scenarios, margin impact, and possible future legislation.

Although we’re only a few months into the COVID-19 pandemic, the economic, employment, and societal impact has been far-reaching. As the downstream ramifications of the pandemic unfold, we are increasingly seeing key demographic and regional differences in the impact of these changes. Understanding these nuances is critical in determining how the healthcare landscape will change over the coming months and in predicting potential insurer revenue and profit shifts due to new coverage changes tied to the pandemic.

In Part 1 of our series, we introduced a model forecasting how the national health insurance member mix might change given varying unemployment levels. Here, we wrote how if unemployment reaches 30 percent (a previously unthinkable possibility), then up to 35 percent of the national commercial group population will migrate out of the segment. Depending on assumptions for how these newly unemployed (and their dependents) choose to purchase (or forego) health insurance coverage, tens of millions of newly uncovered lives will migrate into the Affordable Care Act (ACA) exchanges, Medicaid, or choose to stay uninsured. A small portion will also stay in the commercial insurance market by switching to their spouse’s coverage. Or, those in the workforce over the age of 65 could transition to Medicare.

While the macro-level view is interesting, albeit distressing, insurers and providers are no doubt wondering about the projected impact of this mix shift in their specific geographies. For example, what if the insurer’s member mix is heavily weighted towards small group insurance? Or what if an industry is particularly hard hit? What if the insurer is operating in states with open enrollment for coverage under the ACA and/or in a Medicaid expansion state? These and other factors will influence the migration of those losing employer coverage, which will ultimately impact local insurer and provider financial health near-term (aside from all of the much-discussed changes in utilization occurring as a result of COVID-19).

The magnitude of the pandemic’s impact at the regional level depends on factors such as industry mix and business size. Early reports from the US Bureau of Labor Statistics reveal the vast majority of job loss reported in March occurred in the leisure and hospitality sector. In contrast, businesses in the utilities and wholesale trade sector have been impacted relatively less.

COVID-19 has had an outsized effect on small businesses. Consider, for example, that the National Federation of Independent Business reported on April 2 over half of small businesses (56 percent) have either scaled down or adjusted their operations as a result of the pandemic. Similarly, by the time March was over, a reported 40 percent of small businesses in the dining and retail sectors that employ hourly workers in the US had already closed their doors.

We continue to update our mix shift model in real-time to reflect the current regulatory and economic conditions influencing the health insurance space. When determining how much each segment will be affected by unemployment, our model now incorporates state industry mix, employment by employer size, and layers of job loss data by industry due to the pandemic. 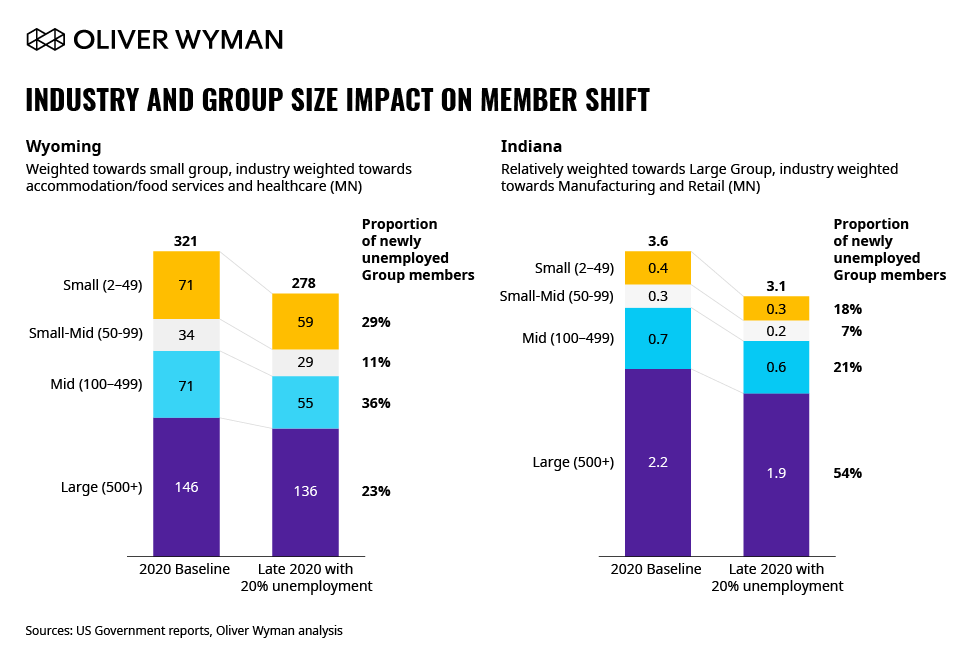 Figure 1 above illustrates how the current distribution of employment by employer size impacts the mix shift within a state in our 20 percent unemployment scenario. In states like Wyoming with a proportionally higher number of smaller businesses, the majority of the newly unemployed will come from both small and small to mid-group segments.

In contrast, states like Indiana have proportionally more residents with coverage from larger employers who will see a greater number of newly unemployed from the large group segment. These state-by-state differences will have a downstream financial impact: Insurers with a large proportion of high-premium, high-profit margin small group members will experience a greater reduction in revenue and profit as a portion of this population either migrates to low-margin Medicaid or exchange plans or exits the health insurance market altogether. This effect is more muted in states with higher amounts of large group coverage, where insurers already see lower premiums on fully insured businesses, and much higher penetration of Administrative Services Only (ASO) or self-funded business, the latter already experiencing lower revenue and low margin.

As noted above, as pandemic-related unemployment causes members to exit the commercial segment, the next question becomes: Where will these members go? Aside from those switching to their spouse’s employer-offered insurance or switching to Medicare, state-by-state regulatory nuances will affect their available choices.

According to US Census Bureau data, nearly 60 percent of the uninsured population in 2018 were employed – meaning many of these individuals could go to the exchanges to seek insurance. Yet, in late March 2020, as COVID-19 was unfolding, US President Donald Trump decided not to open enrollment for the currently uninsured who don’t qualify for Medicaid. However, for those living in states that operate their own exchanges, the decision to open special enrollment periods is up to each state. Eleven states had opened these special enrollment periods as of last week. Along with state-specific Medicaid expansion assumptions above, we have now also incorporated these state-specific nuances around special enrollment periods for those already uninsured at the beginning of this pandemic.

Figure 2 details the potential impact of a given state’s Medicaid expansion and/or open exchange status on member migration – again illustrated using our 20 percent unemployment scenario. States like Texas are projected to see lower enrollment in Individual or Medicaid plans; instead, a higher portion of the newly unemployed may become uninsured. In Medicaid expansion states that have also opened the ACA exchange (like California), individual and Medicaid membership will grow, with smaller proportional growth in the uninsured. 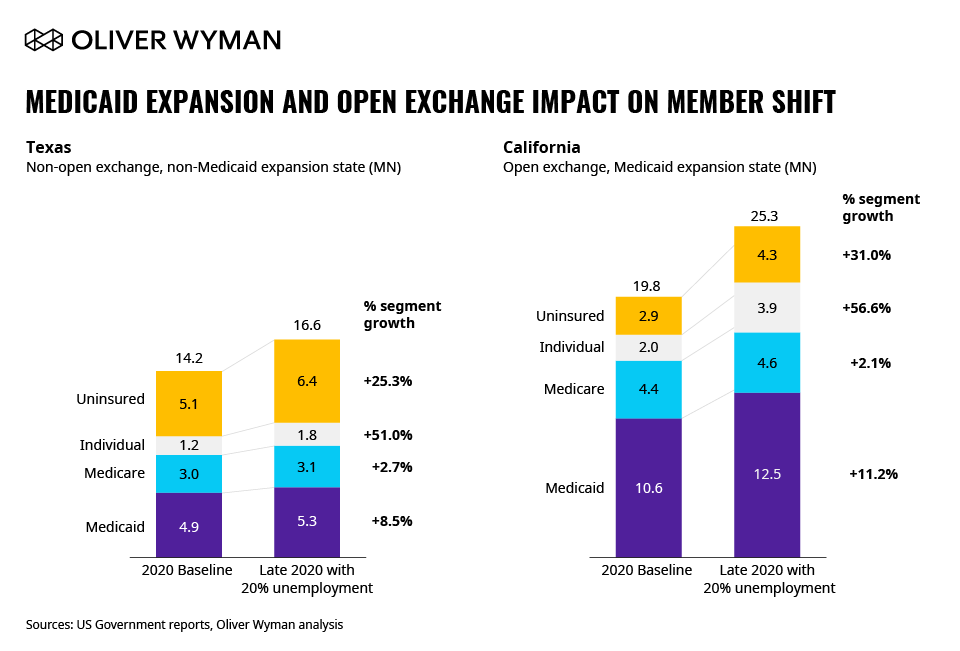 The shifting insurance coverage will ultimately affect insurer revenue and profit margins. Our model now incorporates updated and new data on revenue and margin by a line of business, by state, to provide a more nuanced understanding of the ultimate financial impacts of the mix shift we have modeled.

Comparing member mix, revenue, and margin at the national level reveals two key insights. First, as the unemployment rate grows, overall revenue may actually increase as some group members shift to Individual and Medicaid segments, and thus remain with the insurer (pending Managed Care Organization penetration in the specified region). Especially for the lives leaving self-insured commercial coverage and migrating to fully insured business, this wouldn’t be necessarily bad for overall insurer revenue.

Margin, however, is a diﬀerent story. Likely more important for insurers, unemployment and associated mix shift have a negative impact on profit. Reductions to insurer margin are amplified as a greater portion of members shift to low- to negative-margin Medicaid business. However, at higher rates of unemployment, member migration from lower-margin large groups to higher-margin individual coverage may mitigate profit impact. (For more information, see Figure 3 below.) 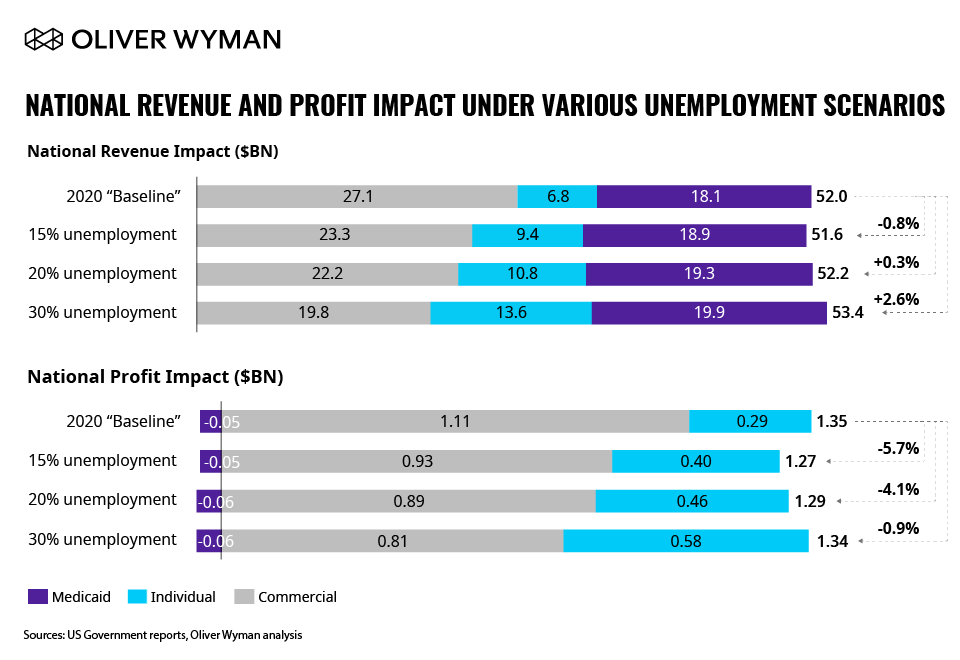 Of course, the pandemic’s impact on insurer revenue and profit will be unique based on each payer’s current insurance mix. For some, the negative impact will be exacerbated by multiple factors including the insurer’s original small group population size and its associated premiums, and the insurer’s specific profit margins by business line.

As we mentioned in Part 2 of our series, the “Corona Effect” will have a lasting impact on individual and employer healthcare needs, reflected in the mix shift, product features, and future demand for coverage value. Access to healthcare and the buying and selling of healthcare will also see major changes. As the healthcare ecosystem focuses on recovery scenarios and future planning, those players – especially health plans – who can build and adapt their capabilities to address the “Corona Effect” will be best positioned to serve their employer and member needs, and experience healthy and sustained growth moving forward.

For more information, we invite you to read the first two articles of this series, “Is There a New Normal in Commercial Health Insurance?” (Part 1) and “The Potential New Normal in Insurance Products” (Part 2).

Defining Healthcare's Workforce for the Future

Shifting demand will change the nature of work in healthcare.

A closer look at how fast change may happen, who could win (and lose), and how the next decade may unfold for incumbents and new market entrants.

Why a focus on the provider is needed to achieve 4 or 5 Stars.

This post is the second in a series of three this week based on a new Oliver Wyman report that explores in-depth how “partnered products”—health insurance products built around a single provider system, multi-specialty group, accountable care organization (ACO), or clinically integrated network(CIN)—are transforming US health insurance.