Our Expertise Insights 2015 March View from the Gulf: 10th Oliver Wyman/Zogby Research Poll
Falling oil prices and continued violence in the region have done little to undermine business confidence in the Gulf according to the 10th Oliver Wyman / Zogby survey of 219 senior executives in the UAE, Saudi Arabia, Qatar, and Kuwait. It’s a shortage of fuel for innovation that’s more worrisome: the needs for investment, talent, research, and infrastructure are stubborn obstacles to innovation within the four countries, and especially in the UAE.

These are among the findings presented at the 6th Oliver Wyman / Financial Times CEO Conference March 19th, 2015, in Dubai, UAE.  The theme for the conference is “Establishing a Silicon Valley in Today’s Gulf,” and the data poses some interesting questions for panel discussions on finding the financial, human, and knowledge assets necessary for innovation and growth.

The survey findings highlight continued resilience in a region grown accustomed to economic ups and downs and the political and military struggles of its neighbors.   Indeed, while optimism across the Gulf had been tempered by events in the last survey (December 2014), executives have rebounded.  The UAE and Qatar have seen steady increase over the past five years (to highs of 93% and 89% of respondents, respectively), while Saudi and Kuwait have seen a significant jump in confidence from last year, when confidence had decreased somewhat.  Saudi confidence jumped 33 points, from 56% to 89% and Kuwait jumped a full 55 points to 93%.

At the same time, pockets of concern remain.  All respondents noted the negative impact of falling oil prices and the decline in government revenues.  More interestingly,

This year’s poll also saw an interesting reverse in investment focus. Last year, when asked which offers the best investment opportunity for growth, there was nearly uniform support for investment in the home country or in the GCC.  This year executives in Saudi Arabia and Kuwait saw a growth in interest in developed and especially in developing countries.

Finally, the majority of respondents (178 out of 219) view the business effects of opening the Iranian economy as positive, but the expected benefits vary by country.  Executives in the UAE and Qatar see the main benefit as an opportunity to invest in Iran, while the KSA and Kuwait business leaders regard Iranian investment in the region as the main benefit.

"Executives in the region are still playing the long game in their concern for the ways to make their achievements sustainable,” notes Pedro Oliveira, Partner and Middle East & Africa Region Head for Oliver Wyman.  “They want continued internal investment, a flexible and capable workforce, secure and free-flowing business knowledge, and a continued strong partnership with their governments.”

Dr. James Zogby, the Managing Director of Zogby Research Services finds concern for changes in leadership, particularly in Saudi Arabia, Kuwait, and Qatar most interesting.  “It’s been a pretty interesting year in the region.  I am surprised by the optimism, but not surprised that executives would number continued strong leadership among their concerns.” 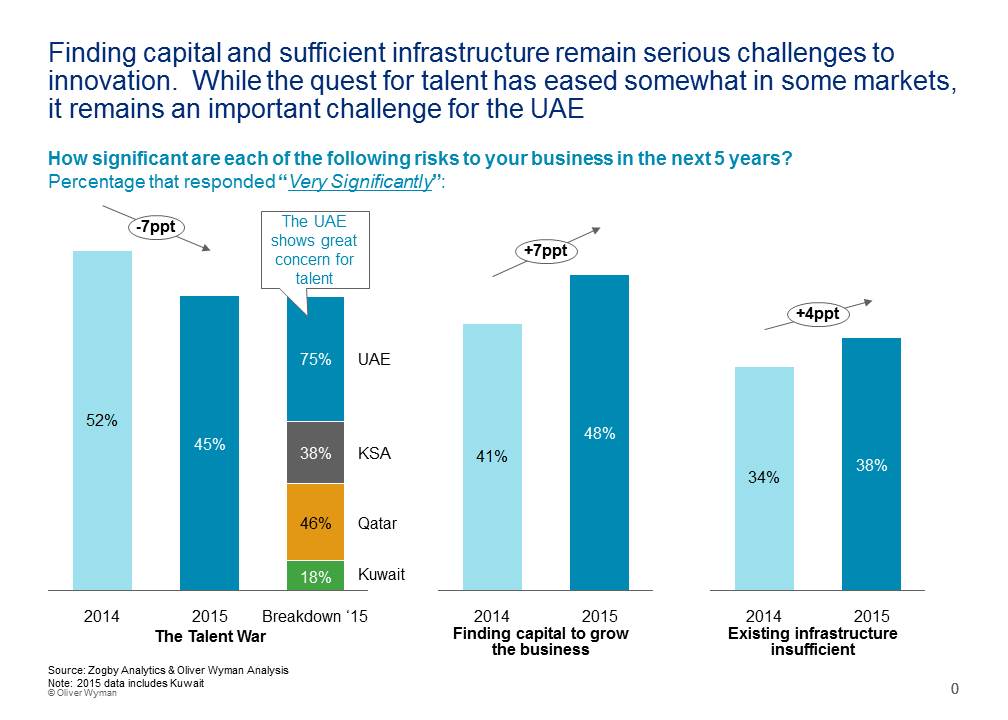 About Oliver Wyman's Middle East services:Oliver Wyman helps leading enterprises throughout the Middle East to develop, build, and operate strong businesses that deliver sustained shareholder value growth. We have three Middle Eastern offices (Dubai, Abu Dhabi, and Riyadh) and serve clients around the Middle Eastern region. Our current industry focus in this region includes financial services, aviation, telecommunications, transportation, energy, and the public sector. We have been active in the Middle East for over 20 years, which has allowed us to support our clients in a broad range of assignments including growth development, reorganization, and turnaround strategies.