Oliver Wyman Sees Expansion Ahead For Aviation Industry Despite Challenges

The next decade will be more challenging for the aviation industry than the 10 years previous years, despite prospects for rising passenger demand, according to Oliver Wyman’s annual Global Fleet & MRO Forecast.

By the beginning of 2030, the global fleet is expected to grow to over 39,000 aircraft, a compound annual growth rate of 3.4 percent annually. This despite looming challenges such as slower economic expansion, increased congestion in the air and at airports, trade-related issues, and pressure on the industry to more actively address climate change. The fleet growth will also fuel increased demand for maintenance, repair and overhaul (MRO) services.

In the short-term, the industry is also facing potential impacts from the rapidly spreading coronavirus as well as the grounding of the 737 MAX.  While in last year’s report, we expected 1,400 737 MAX aircraft to be in service around the world by 2020, the 2019 grounding and subsequent production halt will reduce that number to somewhere between 150 and 700 depending on when the aircraft passes re-certification requirements, is cleared for service, and pilots are trained on any new updates.

“Even with these challenges, along with some expected slowing in the growth rate of passenger demand as well as changes in the mix of traditional freight and ecommerce freight, the industry should still see solid fleet growth in both passenger and freighter aircraft over the next 10 years,” said Tom Cooper, Oliver Wyman vice president and lead author of the report.

Manufacturers will produce over 21,000 aircraft, at an annual average of 2,100, which is more than 30 percent above production for the previous decade, and demand for MRO is expected to expand by 3.7 percent compounded annual growth rate over the next 10 years.

“In terms of aircraft class, narrowbodies will see the most growth at well over 5 percent which is more than any other class,” Cooper added. “Additionally, the engine category will continue to be the primary driver of overall MRO market growth.” 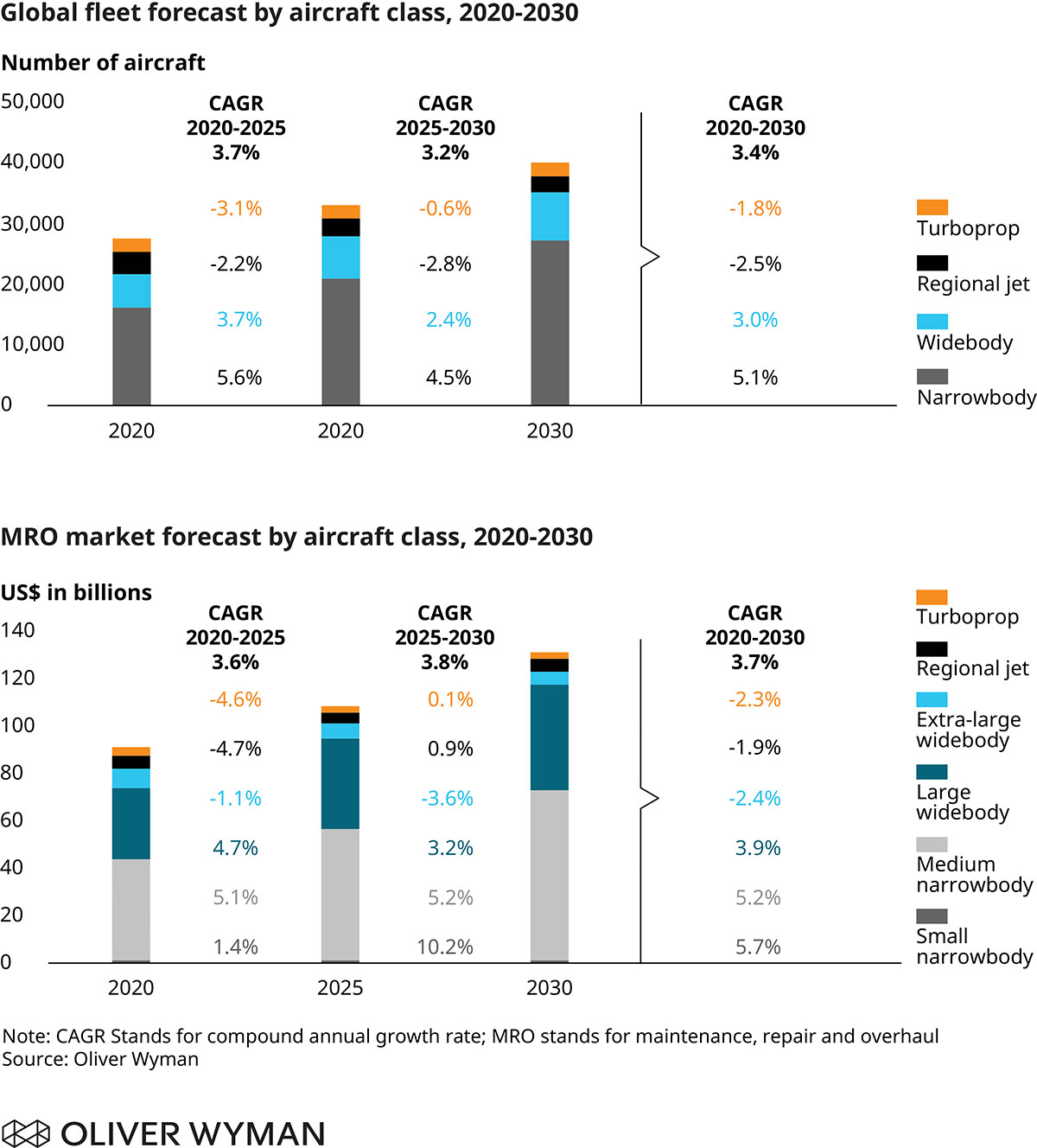 About the Global Fleet & MRO Forecast

The 2020-2030 edition of our Global Fleet & MRO Market Forecast represents a twenty-year commitment to the understanding and assessment of the commercial airline transport fleet and the associated maintenance, repair, and overhaul (MRO) market outlook. The forecast is the go-to resource of aviation executives—whether a manufacturer, operator, or aftermarket provider, as well as for those with financial interests in the sector through private equity firms and investment banks.

Oliver Wyman is a global leader in management consulting. With offices in 60 cities across 29 countries, Oliver Wyman combines deep industry knowledge with specialized expertise in strategy, operations, risk management, and organization transformation. The firm has more than 5,000 professionals around the world who work with clients to optimize their business, improve their operations and risk profile, and accelerate their organizational performance to seize the most attractive opportunities. Oliver Wyman is a business of Marsh & McLennan [NYSE: MMC]. For more information, visit www.oliverwyman.com. Follow Oliver Wyman on Twitter @Oliver Wyman.