According to Oliver Wyman’s Consumer Survey of US Healthcare, women are more engaged in their health decisions than men. Healthcare companies must give female consumers the kind of health system they're seeking.

Men and women have different wants and needs when it comes to their healthcare experience. According to Oliver Wyman’s Consumer Survey of US Healthcare, women expressed more interest than men in not just a handful of new services and products, but ALL options surveyed, which included online specialist consultations, financial navigation and planning assistance, remote virtual physician appointments, wellness centers with access to medically supervised exercise and physical therapy sessions, and access to a personal health and wellness coach (see Exhibit 1 for the top ten most wanted services).

This data demonstrates that the 125 million adult women nationwide are consistently more engaged in their healthcare decisions than men. And while in some cases the variance is small – generally a handful of percentage points – it makes a big difference. Why? For one thing, a family’s primary caregiver is generally female. For instance, 70 percent of family prescriptions are picked up at the pharmacy counter by women, noted Troyen A. Brennan, MD, MPH, CVS Health’s Executive Vice President and Chief Medical Officer, at last February’s Wharton Health Care Business Conference. Similarly, our survey found that 57 percent of women versus 51 percent of men make healthcare decisions for someone other than themselves, both often lacking confidence and reputable sources of information along the way.

For organizations trying to provide new services that address these unmet needs, the difference between success and failure is often defined by a few percentage points; small differences over a significant population matter.

Here’s more on the differences between men and women regarding what women comparatively most want to see changed about the healthcare industry:

1. Women want to be in better control of their individual and collective healthcare decisions.

Women – a consumer demographic that is more commonly taking on the role of caregiver for the elderly – want more progressive decision-making power over their family and loved ones, especially as they generally control more financial healthcare decisions compared to men.

Perhaps not surprisingly, more females than males expressed they are not fully satisfied when communicating with healthcare providers. Although the same percentage of males and females – 22 percent – said they want better information on what physicians and treatments are best – 21 percent of females compared to only 15 percent of males requested their care providers listen more closely to their needs.

Similarly, women generally expressed less satisfaction with healthcare quality overall, with 37 percent noting a specific concern with at least one aspect of this dimension, compared to only 29 percent of men. It is noteworthy that women were almost twice as dissatisfied with the care both they and their families received, as well as the access to measures of what constitutes good care.

But when it comes to having a plethora of readily-available options, quality trumps quantity. Thirty-four percent of women compared to 31 percent of men surveyed said they prefered a health network with fewer available options but higher quality treatments and care delivery services.

More females than males requested availability of a wider range of online and virtual services that offer care assistance in between physical visits. This includes features like being able to have a remote video chat with a physician via a home computer or at a local pharmacy kiosk.

More females than males requested the ability to choose from a wider variety of options for care delivery services that prioritize convenience and on-demand care. For instance, 36 percent of women versus 30 percent of men expressed interest in “fast track” access that reduces wait time with health providers.

Women expressed an eagerness to embrace and utilize affordable, innovative services. For example, 35 percent of women compared to 29 percent of men confirmed interest in services such as therapeutic massage and acupuncture.

And, more females than males said they are interested in wellness-oriented, holistic-focused care services that allow for greater accountability and responsibility. This includes access to “wellness centers” that offer alternative health treatments and medically supervised workouts and physical therapy sessions.

The most preferred services for females are wellness-oriented, suggesting they have a higher interest in a holistic view of healthcare. 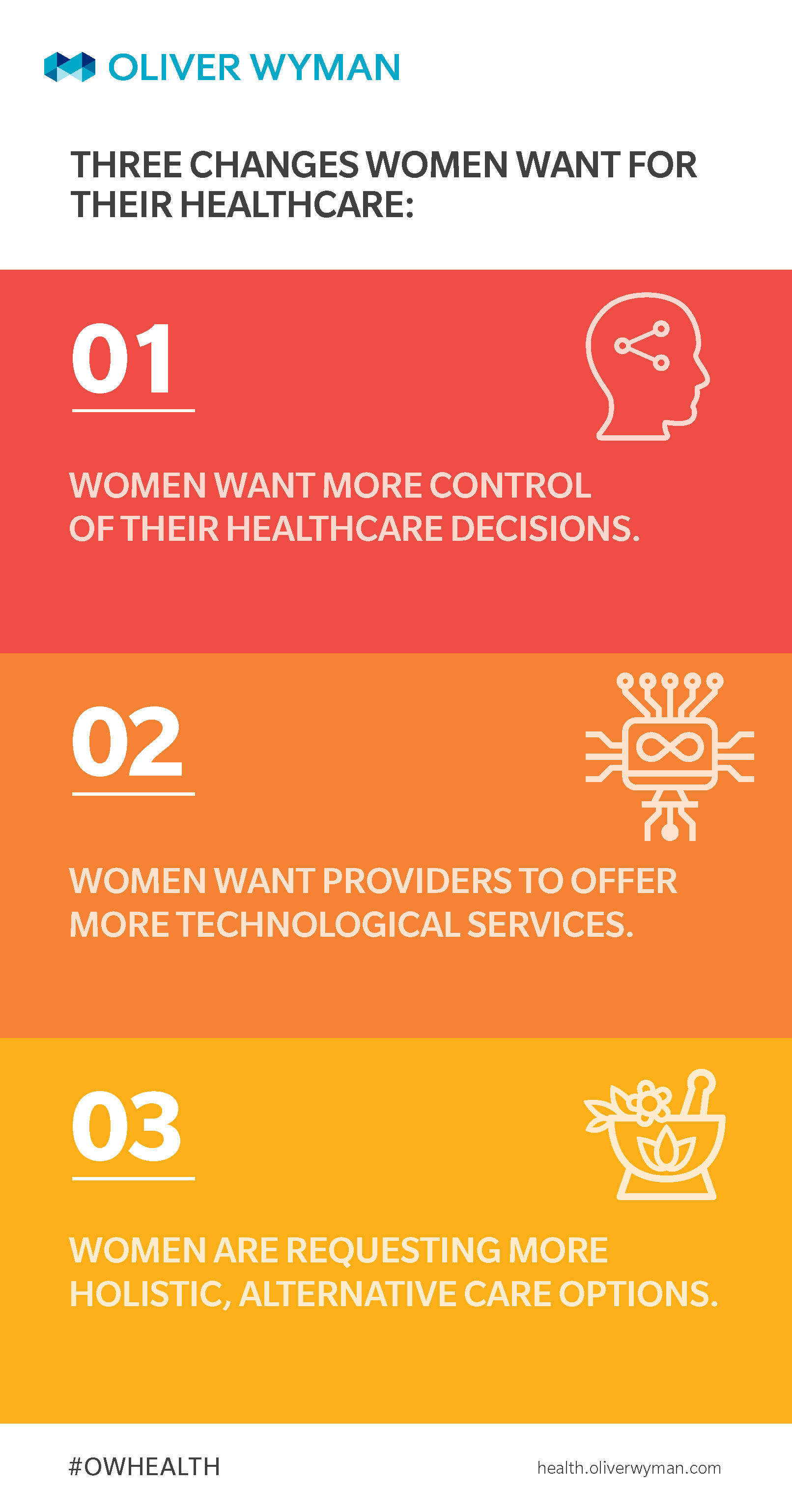 The Greater Significance of These Percentage Gaps

There are simply not enough informational, supportive services and products being generated that cater to the female demographic’s unique needs, enabling them to make educated decisions from a place of confidence.

According to Jennifer McCleary-Sills, Senior Program Officer, Gender Equality, Bill & Melinda Gates Foundation, speaking at last month’s Annual Dynamic Women in Business Conference at Harvard Business School, although 75 percent of the US healthcare workforce is female, nearly 25 percent of healthcare leaders are female. Indeed, a reported 1 in 4 hospital CEOs are female. And the number of women writing a recent G.O.P. healthcare bill in the Senate? Zero, compared to 13 men.

As Deborah Dunshire, CEO and President of X’Tuit Pharmaceuticals, stated at last month’s Annual Dynamic Women in Business Conference at Harvard Business School on the dire need for more women in healthcare leadership roles, it is diversity that allows complex healthcare problems to be solved in the most diverse way possible. And although sole emphasis on promoting someone based solely on her gender alone will not advance the industry, she emphasized that focusing on greater female representation will help more females make empowered decisions by ensuring the industry is not ignoring a critical patient population segment.

All of this information offers tremendous opportunities for providers and insurers. For one thing, healthcare companies could take a cue from Consumer Package Goods companies and retail that have learned to truly listen to the consumer and customize offerings. By focusing on understanding female consumers, and then catering to their specific needs, healthcare companies will effectively connect the dots between female consumers’ care requests and the value-based care outcomes they rightly deserve.

Secondly, healthcare companies should focus on having a higher percentage of females serve on leadership roles to drive the greater industry forward and address the aforementioned percentage gaps.

The female consumer voice – the one often in charge of not only their own healthcare, but the healthcare of others around them – is still falling on deaf ears. The bottom line is when all consumers receive personalized care under a supportive and transparent delivery system, the healthcare industry will thrive and flourish. It’s time for the industry to give consumers – both female and male – the health system they are asking for.

What Healthcare’s 'Go-to-Brands' Have in Common

Go-to brands address society's challenges and pull us into a company's inner world. For these brands, value dictates progress.

Consumer Loyalty and the “Happiness Halo”

How can healthcare organizations design a better consumer experience? Focus on building emotional connections—especially with interactions that aren’t typically warm and fuzzy.

Amazon's entry in healthcare is arguably the beginning of a new era. Here are a few predictions on what the future may hold.