A typical headline reads: “Labor shortages expected to continue as employers struggle.” While the media focuses on the impact of COVID-19 on the service and hospitality industries, staff shortages are becoming increasingly common in US industrials.

For many businesses, the sudden drop in labor supply has come as something of a wakeup call. For decades, industrials have been reliant upon immigration to mitigate skills shortages. The huge flexibility of the US labor market combined with America’s unique capacity to attract and absorb immigration has been relied upon by many industrials as their main solution to skills fulfilment.

This world has suddenly changed. Limits on immigration and continued workforce shortages are the new reality. The warning signs have been there for some time. For several years prior to the pandemic the number of job vacancies exceeded the number of those looking for work.

The need for alternative approaches when increasing production

There is much we can learn from others that have already had to face such challenges. While the US has until now been able to rely on its uniquely flexible labor market, Japanese industrials have long had to live with chronic labor shortages. This was not always the case. In the immediate aftermath of the Second World War, the Japanese economy benefited from steady increases in its labor force due to the post-war economic expansion. As birth rates declined with the rapid increase in prosperity, the growth in the labor market went into rapid reverse from the 1970s onwards. By the 1980s, unemployment rates were in the range of 2-3%.

Large industrials were finding it difficult to expand their workforce to fuel further growth. In looking for solutions, their first step was to ensure that they used the available labor supply as effectively as possible. This, in brief, is the story of the origins of lean manufacturing.

Their next step was to substitute technology for labor. From the 1980s onwards, Japan industrial’s use of robots in manufacturing exceeded much of the rest of the world combined. This growth in automation has not only helped Japan to deploy its labor more effectively but has ensured that its economy has continued to grow even as its population has started to decline.

Looking at how the Japanese have tackled the consequences of their structural labor shortages, it becomes clear that if US industrials are to guarantee increased production over the longer term, it will be necessary to adopt a triple deck approach to productivity optimization.

This three-pronged strategy addresses industrial’s labor requirements in the round, within the wider context of process and automation requirements, and takes account of longer-term horizons, not just short- and medium-term needs.

This is where most US industrials are currently focusing their attention. Many have already taken measures to mitigate pandemic-related labor shortages and to manage their immediate workforce needs. These measures include reducing attrition and increasing hiring. (See Exhibit 1.)

Industrials can learn much regarding the streamlining of their processes from the automotive sector. But there are examples from less mature industries too, as the following two opportunities exemplify.

Manufacturers often still rely on step-by-step workflows. This can result in the machine operator waiting around for their part of the machine process to be completed before the part is passed onto the next step. Efficiency can be increased by combining workstations, thereby reducing overall labor demand.

A second opportunity is in network optimization between and within warehouses. To give one example, a transportation company running a less-than-truckload (LTL) operation had been facing severe shortages which were driving increases in order delays and lost packages. In response, they tightened up their operation, standardizing consolidation centers for a limited group of shippers, combined with very tight in-load management, receiving, and tracking. Such an approach can reduce the amount of labor required for handling, thereby increasing labor productivity significantly.

As already mentioned, the dramatic increase in investment in automation, robotics, and artificial intelligence (AI) is at the heart of Japanese industrials’ response to their long-term labor shortages. This investment continues: According to the World Intellectual Property Organization, out of the top 20 AI patent applicants in 2019, 11 were from Japan.

The drive to increase automation is also in line with expectation in the US. The US industrial discrete automation market is expected to grow by about 35% in total until 2025. AI/automation is likely to follow a similar growth path to that already seen in plant and warehouse process automation; for example, putting in place touchless processes for receiving, sorting, and fulfilling orders in the warehouse. This future growth trajectory includes Industrial Internet of Things (IIoT) platforms and digital manufacturing. Though these aspects are currently only in their early stages of adoption and implementation here, data from the Nomura Research Institute suggests that the Japanese market for IIoT equipment is going to exceed USD 9BN in the next five years, almost doubling its size today.

Don’t let your focus on solving immediate labor shortages obscure the need to address the longer-term opportunities that can have profound implications for manufacturing productivity.

While it is essential to improve hiring and retention in the short-term, process improvements and investment in robotics and automation are necessarily longer-term activities. By their very nature, including their greater implementation time, such activities require longer planning horizons.

Almost every US industrial could benefit from having an integrated labor, process and automation roadmap, ensuring workforce and productivity planning is placed on a sound footing for the long term. Wise companies will adopt a triple-pronged approach to productivity optimization, acting on all three of the aspects today, capturing this opportunity while it is ripe for the picking. 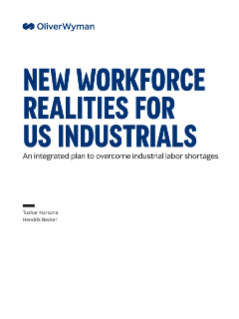