Recover And Rebuild
Toward a Leaner, More Agile MRO Industry
By Derek Costanza and Brian Prentice

COVID-19 was a black-swan event for the MRO industry, with respondents reporting a decline in revenues of 35 percent on average while 27 percent cited revenue declines of more than 50 percent. Our 2020 forecast called for a 39% decline in MRO revenues across the industry.

While the impact of the crisis remains severe, recovery does now appear to be underway. Two-thirds of respondents expect MRO demand to recover to 2019 levels in 2022 or 2023, in line with Oliver Wyman’s forecast of fleet recovery to pre-pandemic levels in 2022 with MRO following closely. Notably, airline respondents generally expect a slightly earlier recovery than MRO respondents. Regionally, Western European survey respondents were more pessimistic than respondents in North America and other parts of the world on how long recovery will take.

Changes to fleet plans and strategies surged to the top of the list of future forward disruptors, outpacing even concerns about the supply/demand impacts of COVID-19 — but of course these are correlated. The impacts of early retirements, prolonged depression of international/ widebody flying, and strategic shifts in business models (such as from full service to lower cost) are clearly top of mind for the industry.  In particular, despite making up only 20 percent of the fleet, widebody aircraft made up 35 percent of retirements in 2020. Recovery of widebody flying is expected to take longer and will grow more slowly than narrowbody flying into the future. These shifts will have profound impacts on the MRO industry.

Other top disruptors naturally stem from uncertainty in the market. We note what appears to be a shift toward “back to basics" with more concern about labor/material cost management.  That said, spending on technology did not suffer as much as expected which indicates a commitment to technologies that drive productivity and other efficiencies.

Top disruptors: ranking of importance, 2017-2021
As ranked by survey respondents 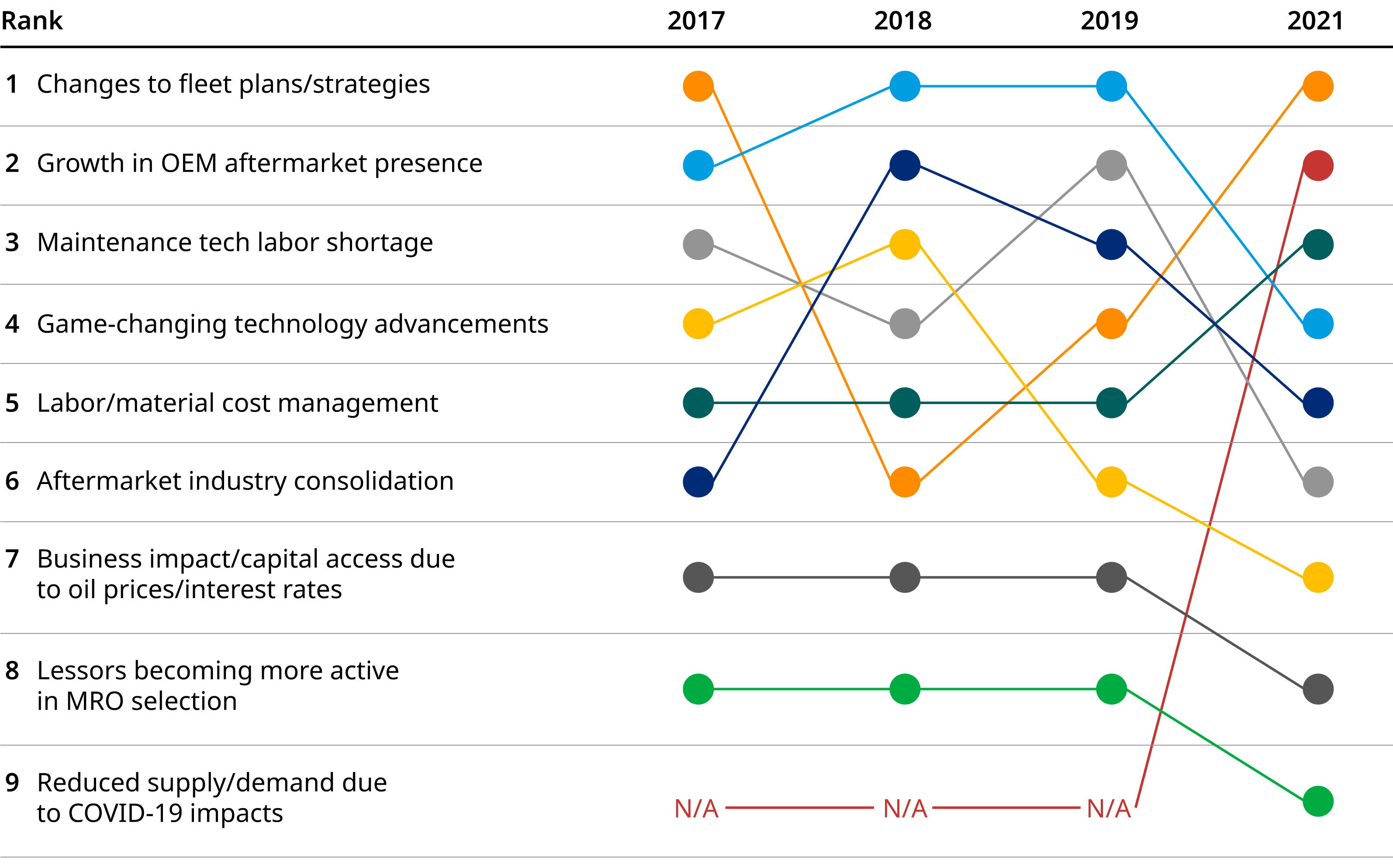 The focus for the next five years is more likely to be building back and creating lean, adaptable businesses, rather than on emerging disruptors. However, lurking just below the surface are perennial industry concerns, such as the competitive positioning of OEMs versus MROs in the aftermarket and labor availability. These are all issues that will impact recovery as companies seek to both build back and manage costs.

The MRO industry responded in a remarkable fashion to COVID-19, using nearly every lever at its disposal. Operational efficiency measures were used by nearly all respondents, with over half indicating they used them significantly. Airlines made liberal use of parking/cannibalizing aircraft and renegotiating existing vendor supplier agreements. Interestingly, only two-thirds of airline respondents said they reduced headcount, likely owing to government support. MROs, on the other hand, with direct labor as a larger portion of their cost base and less government support, had to reduce headcount more. Most respondents also cut back on planned expansions, innovations, and capital expenditures, but many increased their investment in technology, particularly remote work tools and mobile handheld computing.

Competitive positioning for MROs versus OEMs in the aftermarket continues to be one of the perennial potential market disruptors. Our survey confirmed that OEM presence in the aftermarket will likely continue to grow, with 64 percent of respondents anticipating that OEM aftermarket focus will increase over the next 1-3 years. We believe, however, that this growth will continue to be concentrated, as it has been to date, on new platforms rather than legacy platforms. Our survey confirmed that OEMs are likely to be most focused on the engine and component aftermarkets, rather than airframe. In addition, survey respondents expect significantly more focus by airframe integrators (such as Boeing, Airbus, and Embraer) on the component aftermarket than the airframe MRO market.

Labor scarcity has been top of mind over the past several years for all segments responding to our survey and continues to be a major concern – COVID-19 is expected to grant only a temporary respite. Survey respondents indicated that instability in the industry will be the top factor increasing the challenge of securing labor, closely followed by competition from other industries, lack of qualified applicants, and a reduction in long-term labor supply.

A key bottleneck in expanding the talent pool continues to be a lack of women entering the industry. Across maintenance and engineering organizations, women make up only 12 percent of staff and 8 percent of those in leadership roles. While survey respondents by and large are supportive of inclusion and diversity (I&D) programs, only 9 percent identified I&D as a lever for combating labor shortages. A forthcoming report by Oliver Wyman on women in aviation has found that more must be done to improve the effectiveness of I&D programs. Sponsorship, mentoring, and coaching also are critical in attracting more diverse talent. Furthermore, I&D must be seen as a strategic business imperative and its goals as fundamental to business success.

In its second decade, the annual Oliver Wyman MRO survey is an industry standard that samples the attitudes and strategies of executives from across the aviation industry as they address key trends and emerging issues in the maintenance, repair, and overhaul sector.  In this year’s survey, we focus on the long-term challenges that the pandemic has created, together with ongoing industry challenges. As in past years, we have leveraged the latest Oliver Wyman Global Fleet and MRO Forecast  to provide additional color.

More than 160 global aviation professionals responded to this year’s survey, drawn from a cross section of airline operators, airline and independent MROs, original equipment manufacturers (OEMs), and others. Approximately half of respondents were senior executives (C-suite or vice presidents) and nearly 70 percent were director level or above. Over half of respondents’ companies are headquartered outside of North America.

The MRO Survey was prominently featured in our recent Trends and Forecast presentation for MRO Americas.  Please check out the full presentation on our event page. 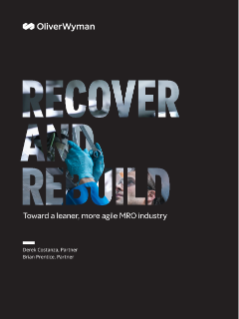 The Long Haul To Normalcy

Oliver Wyman analysis shows that the fourth quarter of 2021 is likely the earliest we can get close to “back to normal” in the US.

Conversations with industry experts at the leading edge of transformation