Hong Kong, July 11, 2017 — The number of trips by outbound Chinese Traveler is expected to reach 150 million this year, but while average trip spend is on the rise (up 3.5 percent 2015-2016), surprisingly shopping spend declined both in absolute and relative terms, to 33 percent of trip spend in the same period, according to a report released by Oliver Wyman, a global consulting firm.

RMB, including all destinations 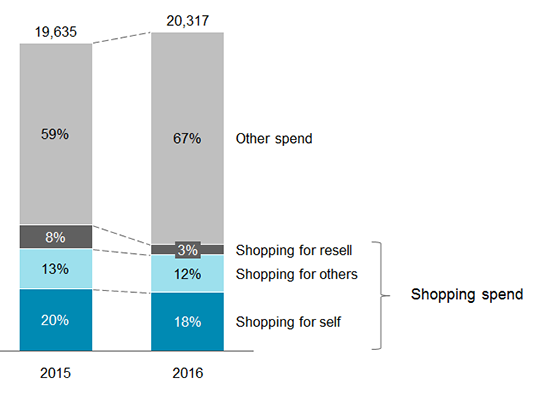 The findings of the report, ‘Prepare for Turbulence: The Chinese Traveler of Today and Tomorrow,’  reveals that shopping dropped from second biggest motivation for traveling to third, behind sightseeing, recreation and entertainment. The decline was mainly driven by decreased shopping for resale – ‘daigou’ – which fell from 8 percent to 3 percent year-over-year.

“Chinese Traveler continue to shift their spending towards more meaningful experiences such as exquisite dining, extraordinary cultural journeys and even adventurous sports,” said Hunter Williams, Oliver Wyman partner and author of the report. “At the same time, cross-border e-commerce has grown rapidly, overseas travel has democratized, and there is greater availability of products at home, meaning there is less need to for buying overseas for resale”

For example retail spend as proportion of overall trip spend in the United Kingdom went down from 42 percent to 33 percent despite the weakness of the pound following Brexit. A particular fall was seen in daigou spend, which dropped from RMB1,800 to RMB1,000 per person from 2015-2016. Similarly, retail spend in the United States dropped from 41 percent to 28 percent with only 5 percent of respondents ranking shopping as number one reason to go to the country.

The report reveals the major shifts in the tastes of Chinese Traveler, who are becoming more independent as they become more sophisticated. “Cookie cutter” holidays have greatly declined in popularity as a result – fewer than 1 in 40 holidays were mostly planned by travel agents in 2016 vs. more than 1 in 7 in 2015. They are also staying longer in distant locations, traveling more with their families and even spending less on shopping. They now travel more with immediate family and especially children, resulting in growth in average group size from 2.9 to 3.1 travelers per group.

In terms of travel duration, Chinese Travelers are making shorter trips to Asia and significantly longer trips to long-haul destinations. Hong Kong remains the most popular destination despite seeing a 3 percent year-over-year drop in Chinese visitors in 2016, with the city appearing to be poised for a comeback with nearly seven times as many respondents saying their impression of the city had improved (55%) rather than worsened (8%), and the majority perceiving it as “good value”.

South Korea has slipped from its position as the top destination, seeing Chinese visitor numbers decrease 3 percent year-over-year in 2016 and a slump in popularity with Traveler planning to visit falling from 31% in 2015 to 17% last year. In contrast, Japan has continued to rise, again being the fastest growing destination and now also the most desired, with 4 percent year-over-year growth and 29 percent of respondents planning to visit in 2017.

Interestingly, the report also reveals that twice as many trips were made domestically last year compared to 2015, with over 90 percent of respondents making at least one domestic tourism trip in the past 12 months. On the consumption front, they are much less interested in shopping when traveling domestically and also more price conscious, with 47 percent of respondents seeking value/price compared with 40 percent for overseas destinations.

With long-haul destinations becoming more popular among Chinese tourists, Oliver Wyman expects that a greater proportion of spend will be allocated to accommodation, dining and entertainment, while shopping spend as a percentage of overall travel spend is likely to continue to decline moving forward.

The report titled, “Prepare for Turbulence: The Chinese Traveler of Today and Tomorrow”, is based on a survey by Oliver Wyman of 2,000 Chinese Traveler. It aims to reveal major shifts in the tastes of Chinese Traveler, and indicates that the rising number of Chinese outbound Traveler are less focused on shopping, travel more frequently with family and children, plan their own holidays and seek attractive themes or associations as well as dining opportunities.

Oliver Wyman is a global leader in management consulting. With offices in 50+ cities across nearly 30 countries, Oliver Wyman combines deep industry knowledge with specialized expertise in strategy, operations, risk management, and organization transformation. The firm has more than 4,500 professionals around the world who help clients optimize their business, improve their operations and risk profile, and accelerate their organizational performance to seize the most attractive opportunities. Oliver Wyman is a wholly owned subsidiary of Marsh & McLennan Companies [NYSE: MMC]. For more information, visit www.oliverwyman.com. Follow Oliver Wyman on Twitter @OliverWyman.