This briefing paper is co-authored with the World Economic Forum.

The case for finance acceleration

The time for concerted climate action is now. Unless there is a significant and immediate reduction in carbon emissions, studies by the United Nations Framework Convention on Climate Change show that global warming will exceed 1.5°C, resulting in irreversible damage to the planet and grave threats to ecosystems and humans. To achieve net-zero emissions worldwide, the heavy industry and transport sectors, which together comprise 25% of global greenhouse gas (GHG) emissions, require rapid decarbonization and the scaling of critical solutions and infrastructure. The aviation sector alone requires an additional average investment of $300 billion each year between 2022 and 2050. Steel, a critical hard-to-abate sector, requires an additional $200 billion to transition steel assets to net-zero compatible technologies and $2 trillion to set up enabling infrastructure by 2050.

However, as discussed in the Financing the Transition to a Net-Zero Future report, private finance is not in a position to mobilize capital at the scale and speed required for industrial decarbonization. There is insufficient willingness and capacity to invest in innovative, emerging technologies that have not yet been proven and deployed at a commercial scale. Reduced investment appetite and the high cost of financing are causing a widening investment gap.

The factors driving this resistance:

Bridging the existing investment gap will require targeted policies that make use of the lessons learned from the successful mobilization of capital towards renewables during the past decade. Scaling up investments in decarbonization solutions will require establishing the underlying economic case with certainty and mitigating the operational risk. Designing effective policies will require the input of policy-makers, financial institutions and industry stakeholders. To do so, the aviation and steel sectors require a policy framework and key policy recommendations that are the most likely to increase financier confidence in net-zero transition investments.

Effective policies that aim to catalyse private sector action will ultimately strengthen the underlying economics of the net-zero business models required to scale up affordable finance from financial organizations, with the objectives of:

1. Generate demand: Strengthened business models are crucial to the generation of sustained, predictable demand (and revenue) for green products. Policy-makers can generate demand by creating measures aimed at reducing the “green premium”, mandating the purchase and procurement of green products and credentialing certain products as green to establish regulatory acceptance as climate-friendly solutions.

2. Develop reliable and scalable supply chains: To bring transition solutions to market, it is necessary to establish reliable and scalable supply chains. Currently, some business models rely on green production inputs like hydrogen, biomass and renewable energy that are costly and difficult to source. Such raw materials are in demand to make other green products as well. Public sector intervention – by prioritizing critical inputs and increasing national production capacity – is needed to establish strengthened supply chains.

3. Unlock finance and establish other enablers: Interventions can improve project risk vs return through direct measures such as incentives and through de-risking measures and can catalyse the involvement of those public and private sector stakeholders needed to establish supporting infrastructure and investments. Another key enabler is the establishment of national net-zero pathways by governments across sectors.

Spotlight on the aviation and steel sectors

Aviation accounts for nearly 3% of GHG emissions annually, with emissions needing to fall by nearly 24% by 2030 to keep the sector on track to transition. Sustainable aviation fuel (SAF) – a biofuel used to power aircraft that has similar properties to conventional jet fuel but with a smaller carbon footprint – is critical to the net-zero pathway for the sector. Policies can enable sustained global demand, greater production capacity, technological maturing, and the enhanced cost-competitiveness of SAF with traditional fuels.

Introduce SAF blending mandates that facilitate the large-scale adoption of SAF in the near term and generate guaranteed long-term demand. Many governments have successfully introduced a percentage blending mandate with a gradual ramp-up.

Mandates on their own, however, will not be effective as airlines will find it difficult to comply with regimes that increase the cost of fuel significantly without compensatory price support. Pricing gap mechanisms (i.e. reducing the cost differential) are necessary to de-risk airline uptake and increase cost-competitiveness with traditional jet fuel.

Support the scaling up of SAF pathways by implementing measures to limit the volatility of feedstock prices, guarantee consistent feedstock supplies and prioritize critical production inputs where supplies are limited. These mechanisms will reduce supply-chain risk and enhance business model certainty.

Establish clear sustainability criteria for SAF, ideally in alignment with global standards, to reduce the regulatory risk that fuel developers encounter when deciding which SAF type to produce. Clear sustainability criteria (such as on the basis of GHG reductions and established pathways) will help scale supply by creating a level playing field between technologies and provide certainty for both SAF developers and financiers that the production outputs will qualify as “green”.

3. Unlock finance and other enablers

Achieve reductions in the cost of capital by reducing the investment risk for financial institutions. Policies should consider:

Steel accounts for ~7-9% of global GHG emissions and is among the three largest CO2 emitting sectors. As steel demand is expected to grow in the double-digits annually, it is imperative that the industry transition to net-zero, receiving the increase in investments needed to establish net-zero steel plants and enable supply-chain infrastructure. It is estimated that first-of-a-kind steel plants will have operating costs up to 55% higher than conventional steel plants in the 2020s. It will therefore be critical for policy-making to focus on the cost-competitiveness of net-zero aligned production, predictable demand and the establishment of infrastructure that improves access to production inputs such as raw materials, green fuels and renewable energy.

Given the downstream applications of steel, establishing a clear definition of low-CO2 steel and the eligible production processes will enhance buyer confidence in “green steel” and financier confidence in investments to produce eligible products. Bodies such as the World Steel Association could also play a role in establishing this definition with government backing.

Enabling high- and low-emissions technologies to compete on a fair footing would generate sustained demand. In Europe, this would require treating output based on novel new technologies, like using hydrogen to produce direct reduced iron (H2-DRI), the same in terms of free allocation as existing steel plants in the European Union’s Emission Trading System (ETS). Relatedly, levelling the playing field globally would require keeping those outside the system from undercutting businesses that pay a carbon price by allowing steel prices to rise on the market. An example is the Carbon Border Adjustment Mechanism.

Affordable and consistent availability of critical inputs such as low-cost hydrogen, scrap metal and renewable energy will be vital to scaling green steel production and the associated investments. For example, policy-makers could consider how to facilitate cooperation between steel producers upstream, where there could be collaboration in the production of green inputs (e.g. hydrogen). Where necessary, policy-makers may need to prioritize access to scarce feedstocks and energy sources across sectors.

3. Unlock finance and other enablers

A crucial driver of low investment appetite from financiers is the significant cost differential between brown and green steel, with few measures implemented globally to bridge it. This business model risk combined with heavy reliance on voluntary consumer-incurred green premiums needs to be addressed. Where market forces constrain green steel prices, the effective de-risking of investments (e.g. risk tranches) and reductions in insurance-related costs can potentially increase private finance participation.

Mobilizing the investment required to transition the aviation and steel sectors is no small undertaking but the costs of delaying action any longer are much greater. The actions taken in the next decade will determine whether net-zero ambitions remain attainable and whether a global climate crisis can be averted. Governments, businesses and financial institutions must work together to establish the enabling ecosystems and mechanisms needed for capital to flow quickly towards critical decarbonization solutions. The Financing the Transition to a Net-Zero Future initiative and the Mission Possible Partnership intend to continue convening these key stakeholders to enable the concerted and collaborative effort needed to achieve a net-zero future. 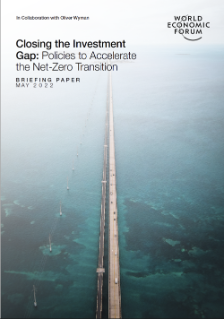 Financing The Transition To A Net-Zero Future

Approximately $50 trillion in incremental investments is required by 2050 to transition the global economy to net-zero emissions.