"Since my company is actually working with Oliver Wyman on projects now, there's also a fascinating intersection of old and new."

Sebastian Wernicke: A TED Talk on the Ultimate TED Talk

Dr. Sebastian Wernicke serves as Chief Data Scientist at ONE LOGIC, a German software and consulting boutique for massive-scale data analytics, machine learning, and artificial intelligence. Sebastian originally studied bioinformatics and previously worked across disciplines from strategy consulting to building massive-scale platforms for genetic data analysis. With well over 4 million views, he is also widely known for his TED Talks around data and statistics. Previously, Sebastian was a Principal at Oliver Wyman's Munich office. We caught up with Sebastian to hear about his journey since OW.

I left Oliver Wyman in 2012, a year when biotech - in particular genomics - and cloud computing started to seriously take off, and joined a Boston-based startup working within this intersection. We grew from 20 to over 250 employees in just 3 years and I spent my time in a transatlantic quantum state between Boston, San Francisco, London, Munich, and Belgrade. When my son was on the way, it was time to commit to one location. I moved back to my hometown, Munich, to become Chief Data Scientist at ONE LOGIC, supporting organizations across industries to gain actionable insights from their vast data collections

How is what you're doing now similar to what you did at Oliver Wyman? How is it different?

It's a comparable level of intensity and I depend as much as ever on having a smart, dedicated team and amazing colleagues. The main difference is that scaling a company is one gigantic, open-ended project without a defined end. You have to see every action and decision through to the end. Most decisions will have immediate impact and you have less control over your agenda than you'd like. Since my company is actually working with Oliver Wyman on projects now, there's also a fascinating intersection of old and new.

What was one of your most important experiences at Oliver Wyman?Working on a very intense 15-month project to restructure a large insurer was an awesome demonstration of what a truly capable and tightly-knit group of colleagues can achieve. The friendships from that project last until today, as do the results.

What do you do when you're not working?

Usually starting with a plan to cook some elaborate recipe based on food science, then quickly simplifying things when my son (1½ years old) makes it quite clear that he expects a fast turnaround on his request for noodles.

There are two ways to react to a fire-hose of information and data: One is increased processing speed, the other is seeking ground truths and first principles. I have yet to meet a truly successful person who subscribes to the first way.

Sebastian also gave a funny analysis of TED talks in his own talk "Lies, Damned Lies and Statistics." Click below to watch it on ted.com:

In his talk, Sebastian uses the tools of statistical analysis to develop metrics for "the ultimate TED Talk" based on user ratings. According to Sebastian, the most successful TED Talks include:

Using these findings, Sebastian has created the tedPAD, which serves as a tool for everyone to create their own ultimate TED talk. 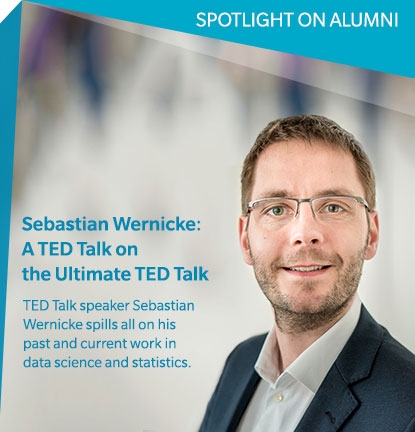