"My background at Oliver Wyman gave me the confidence to launch and run [film] festivals."

Raphaela Neihausen: From Consulting to the Oscars

After graduating from Georgetown University, Raphaela Neihausen came to Oliver Wyman (then Mercer Management Consulting). She started as an analyst and rose to be a senior associate at Oliver Wyman from 2000 to 2007, and while here, Raphaela explored outside passions and interests that eventually led her to the arts. Since leaving OW in 2007 she's led an impressive career producing films and managing film festivals. This year her work earned her an Academy Award nomination for a short film, which can be streamed on the New Yorker's website here. We were fortunate to catch up with her and hear about life since OW.

Tell us a little bit about yourself and your career path.

Since leaving Oliver Wyman, I took my business skills and applied them to the world of film which I have always loved very much. In 2010, I cofounded and launched the annual documentary film festival DOC NYC (now America's largest documentary festival) as Executive Director with my husband Thom Powers as Artistic Director - a festival which we still run today. In 2012, we also launched the Montclair Film Festival which we ran until 2015. In addition to those film festivals, we also oversee a weekly documentary series at Manhattan's IFC Center called "Stranger Than Fiction" (now in its eleventh year) and cohost WNYC's documentary of the week.

Most recently I produced the short film "Joe's Violin" that is currently nominated for an Academy Award in the short subject documentary category.

What led you to your current line of work?

My background at Oliver Wyman gave me the confidence to launch and run these festivals.  I felt extremely equipped with all the practical business skills necessary - which surprisingly are often absent in the world of arts. The same is true for producing films.

Oliver Wyman also gave me the ability to explore my interests while I was still working there. I remember I took time off work without pay to attend a film festival and take a brief editing class. I also somehow managed to make another documentary while I was still a consultant (Miss GULAG) that had its world premiere at the Berlin Film Festival and went on to be broadcast worldwide. That was the year that I left OW to pursue a career more closely related to film.

My career at Mercer Management Consulting / Oliver Wyman taught me how to think critically and creatively in approaching a wide range of business problems. Most importantly, it instilled very strong organizational skills and the ability to work productively under tight deadlines.

How is what you're doing now similar (or different) to what you did in consulting?

Starting two film festivals from scratch was very similar to doing a case at Oliver Wyman. You figure out the business objectives, strategies, deliverables and timeline - then get it done under a very tight timeframe! My Oliver Wyman experience with organization building, team management, budget oversight, creating/delivering presentations were also all very useful for my day-to-day work.

What accomplishments make you the most proud?

Of all my accomplishments, motherhood makes me the most proud.  I have a seven year old son and that has been my most satisfying adventure yet.

Make the most of every learning opportunity you have - at work and outside of work.  Life is tremendously exciting and you never know where you might end up. I look back at my consulting years as a true gift that enabled me to obtain the necessary skills for a completely new career and also allowed me to build a smart network of esteemed colleagues (whom I'm still in touch with today). 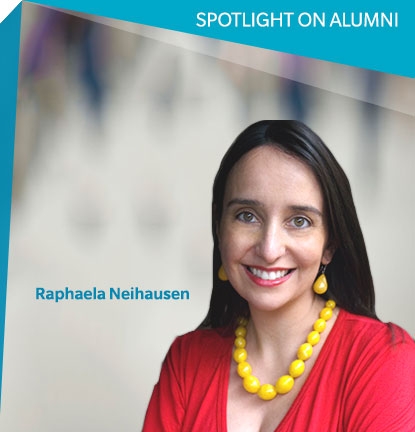