"I look back to my first projects in consulting as the root of my interest in tech and building new businesses in emerging areas."

Marc Shedroff: How Being Bit by the Startup Bug at Google Led to a Career at Samsung

Marc Shedroff is Senior Vice President and Head of Growth Opportunities at Samsung in San Francisco, California. Marc joined Samsung in early 2012 and was instrumental in building Samsung NEXT from its earliest stages. At different points over his time at Samsung NEXT, Marc has held a variety of roles from leading the Operations team, Partnerships team, Ventures team, and the SF and NYC Accelerators. Prior to joining Samsung, Marc has held senior business development roles at Pulse News, Cooliris, YouTube, Google, Time Warner, and AOL. Marc has an MBA from the Wharton School and a BA from Brandeis University.

We were able to chat a bit about life since Oliver Wyman, and he's had quite the career path. Now focusing on SamsungNEXT, which partners with innovators to build ideas into products, grow products into businesses, and scale businesses that leverage and transform the Samsung ecosystem.

I've been lucky to have my interests in consulting, partnerships and media align with my career path, thus far. After college, I joined Corporate Decisions (which was acquired by Mercer Management Consulting in 1997 and ultimately became Oliver Wyman). My consulting experience, and then partly with a venture capital fund that Mercer co-sponsored,  inspired me to expand my knowledge of business management overall.

When I graduated from Wharton in 2002, I was eager to take on a business development role at a consumer media and technology company. After a four year stint at AOL/Time Warner, I joined Google's Video teamto focus on content licensing deals with movie studios, news companies, etc. It must have been some kind of kismet because six months after I joined Google Video, we acquired a fairly unknown, but fast rising startup called YouTube. It was then and there that the startup bug bit me. I went on to work with a series of small startups, driving business development and operations. What fascinated me then about startups, and still does, is the speed and agility in which they're able to execute, solve problems and just get stuff done. It's very energizing to see and be a part of. So when a colleague from Time Warner, who I had also worked with at Google, asked me to start  a software division and new venture with him at Samsung, it made perfect sense for me.

I've been at Samsung NEXT for the past five years. After having had a number of roles here, I now lead a new group focused on building and scaling software or services startups to turn them into high-growth standalone businesses within Samsung.

How is what you're doing now similar to when you were in consulting? How is it different?

When creating a large, new business from scratch, you're often starting with a blank sheet of paper and mapping what could be possible. You're also driving execution strategies. I used a similar approach in my consulting work at Oliver Wyman.  There, we used to talk a lot about value-driven business design; that continues to be a key framework I use at Samsung NEXT when thinking through the initiatives I lead today.

Still, when you're in an operating company, you have many constraints that you may not have in strategy consulting – budgets, cultural hurdles, organizational considerations. At Oliver Wyman, I would spend a majority of my time on strategy, at Samsung NEXT roughly 20% of my time would be on strategy and the other 80% on recruiting the right team and setting up the business for operational success internally.

What led you to your current line of work?  Did your background in consulting help?

My passion for consumer media and tech began during a consulting project at CDI. We were helping the #1 manufacturer of cable TV set-top boxes chart out its future in a broadband, consolidating industry. This was 1997 – no broadband, analog cable, or mobile. I became an expert on all things related to cable TV, media, ecommerce very quickly. My work on this project led to other client work for a large media company and a large consumer electronics firm. Before I knew it, my knowledge of media and tech had grown significantly and so it became the industry where I would focus the rest of my career.

I look back to my first projects in consulting as the root of my interest in tech and building new businesses in emerging areas. After graduating business school, I specifically chose not to return to consulting because I wanted the experience of working at an operating company. I focused on business development because I thought I'd also enjoy working on deals. Since then, my career has largely focused on doing large, complex commercial deals within media and consumer tech companies. Being at the forefront of tech, even though I am not technical, is energizing.

What do you do when you're not working?

I'm married with two boys, age 7 and 4. Not unlike consulting, I travel quite a bit for work. So, when I am home, I tend to focus solely on my family. We live in the Bay Area in California and there are a ton of great, outdoor activities that we can do together. That is in addition to the traditional parent role of chauffeur to swimming lessons, school, karate, etc.

Find mentors. I've been lucky enough to have a number of key people in my career who have been great sounding boards, managers, and connectors. In fact, my road to Samsung was through the same person who I had worked with at Time Warner/AOL ten years prior. He also brought me with him to Google. Not only is he a good "hirer," but also a great sounding board in cases where we haven't been working together.

I'd also recommend using your strategy consulting experience to hone your ability to unpack a complex problem, solve it analytically, repackage it then communicate it clearly and simply. This was an invaluable skill I learned as a consultant and has continued to serve me well throughout my career. 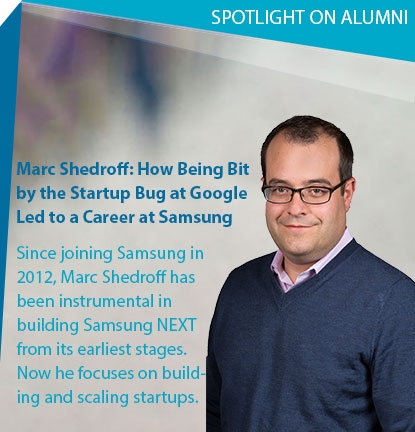