In this episode of the Oliver Wyman Health Podcast, Tom Robinson, Partner in the Health & Life Sciences practice at Oliver Wyman, sits down with Aneesh Chopra, President of CareJourney, the former (and very first) US Chief Technology Officer appointed by former US President, Barack Obama, and a keynote speaker at this year's Oliver Wyman Health Innovation Summit. Aneesh shares his perspective on data sharing in healthcare, his excitement for the Apple Health movement, his views on Health Level Seven International (HL7), Fast Healthcare Interoperability Resources (FHIR), and more.

"What is occurring today is a movement to get the thousands of physician offices and hospital systems that have implemented electronic health records to communicate in a common language in the Internet economy," says Aneesh.

The greater movement for an open, plug-and-play ecosystem across the industry — namely, Apple's management decision to embrace an open, plug-and-play ecosystem where Apple Health can be substituted with other applications — gives him great hope for healthcare's future. Since the Apple Health program was first announced, hundreds of systems are now up and running today.

"Given the pace, my presumption is the vast majority of hospitals — upwards of 80 percent — will see convergence to be able to communicate with Apple Health by this time next year. That's a phenomenal rate of adoption, not specific to Apple, but the capacity to communicate with Apple, or that proverbial second or third app that may come behind it." Aneesh says. 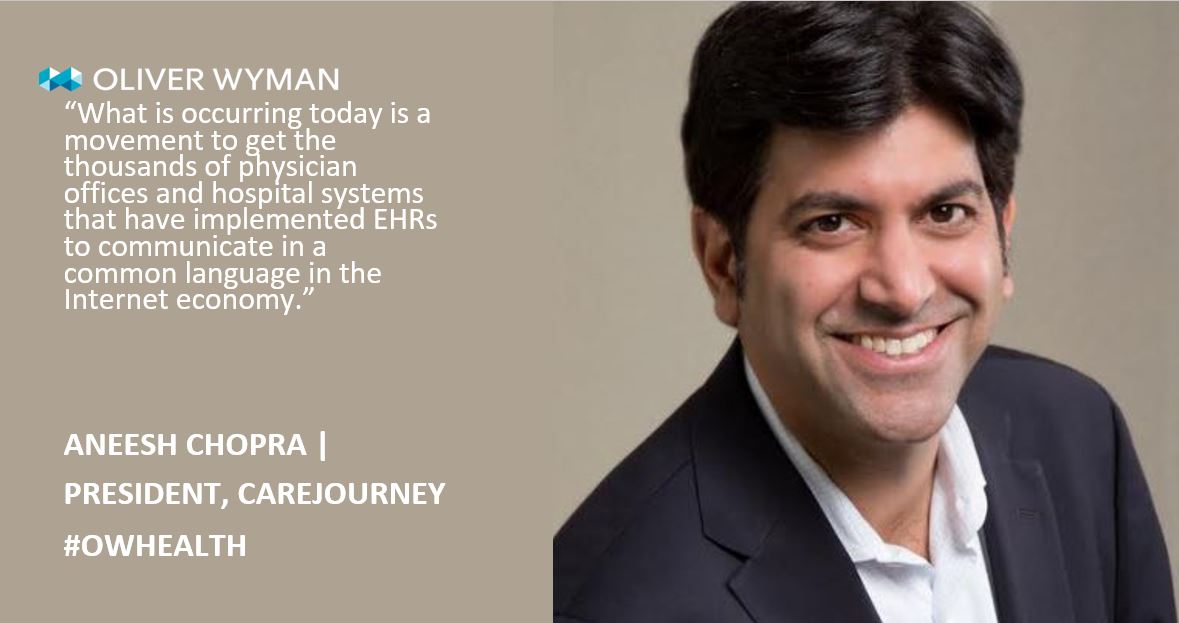 "By embracing an open standard, the next application means everyone — whether something built by Google, Microsoft, startups, big healthcare delivery systems, or internal teams — can use the exact same infrastructure, without incurring marginal cost," Aneesh explains.

There's been a great deal of recent activity in this realm, he points out. FHIR's framework, for example, has been voluntarily adopted by many large organizations to meet government requirements — specifically Meaningful Use, and now the promotion of interoperability. An early coalition of electronic health record vendor adoption was followed by Apple's news last January that it would embrace the FHIR application programming interface (API). And last August, Google, Microsoft, IBM, Salesforce, Oracle, and others committed to the same common language — FHIR — to communicate health information on the Internet.

"That is an unprecedented amount of convergence on a technical standard. And I'd say it's less about whether the particular code base is better or worse than alternatives, but more that there's at least a standard and industry acceptance towards making it work. That's what exciting about the FHIR API. There's no Betamax VHS debate in healthcare moving forward." Aneesh emphasizes. "Healthcare Internet standards will be built on FHIR and will scale to meet more use cases, starting with consumer access and rapidly evolving to reducing physician burden, promoting care coordination and care management, and advancing population health and perhaps a number of genomics or use cases down the road. That's what's exciting."

For more information on this and other podcast episodes, check out the Oliver Wyman Health Podcast page, featuring executive conversations on the business of transforming healthcare.

How to Support Mental Health in Times of Cumulative Stress

The global pandemic has impacted people’s well-being over the past two years.

The Global Disparity in COVID-19 Vaccines is Growing

Despite considerations over the onshoring of medicines manufacturing, the US remains dependent on active pharmaceutical ingredients imported from overseas.

Building a Health Equity Framework for the Pharmaceutical Sector