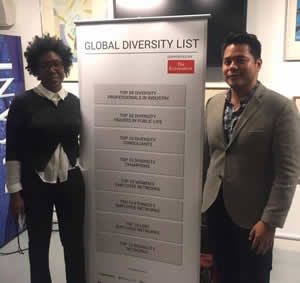 The Economist and the Global Diversity List have teamed up to recognize global leaders in diversity, and we were honored to be among the first recognized.

On October 31, the first edition of The Global Diversity List was launched, providing a comprehensive guide to the individuals who are putting diversity at the heart of human resources within the world’s biggest organizations. The list is supported by The Economist and was launched at their offices in both London and New York.

"GLOW, Oliver Wyman’s LGBT and Allies network, recently launched chapters in Warsaw and the Asia-Pacific region to complement four others world-wide and has developed a close relationship with NYC’s Ali Forney Center: a charity empowering homeless LGBTQ youth. Among a variety of awareness- and community-building events, GLOW teamed with Shell to discuss the importance of straight ally role models and with Deutsche Bank to address challenges for the global careers of LGBTQ employees."

Oliver Wyman wishes The Economist and the Global Diversity List success in their efforts to create the definitive standard of diversity in every country across the globe.